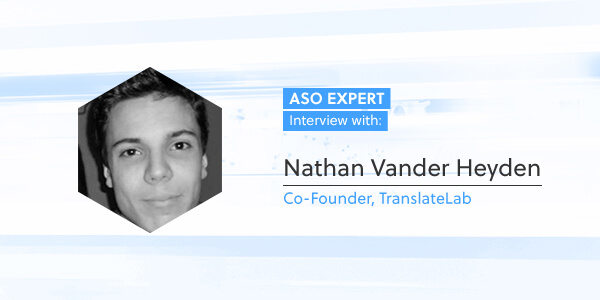 This week, we’re interviewing Nathan Vander Heyden, founder of TranslateLab (app localization agency). Discover the atypical background of Nathan, who started as a freelance translator and ended up founding his own company to help indie developers localize their App Store Optimization (ASO) globally.

1. Tell us a bit about yourself and your company. How long have you been involved in ASO or app marketing?

I started working as a freelance translator, mainly in the automotive & IT industries, but eventually I got bored of the endless stream of marketing texts. Translation gets repetitive when you know your industry and clients well, so about a year ago I started exploring a market that still had challenges to address: ASO and mobile app localization.

Thanks to my work as a translator, I had a lot of experience with SEO, so search optimization for mobile apps wasn’t too difficult to learn, and after a few projects, I realized that my work could very easily be automated. That’s when I picked up Python and invested my savings to turn TranslateLab into a SaaS company. We’re trying to automate every step of the search optimization process, from keyword research to keyword performance analysis—in any language—to make ASO more affordable for indie developers and less tedious for developers with a large portfolio of apps.

Our small (but mighty) team of two is still in the early stages of building the company, experimenting with only a handful of clients. Our initial results look great though, and I’m fascinated by our product and what it could look like six months from now.

2. What was it about this industry that made you choose it as a primary job?

Besides the challenge of automating search optimization, I like ASO because it has a direct and nearly 100 percent quantifiable impact on a client’s sales/app downloads. There’s something rewarding and validating when you see the numbers go up and you’re able to trace that back to the work you did—I really enjoy that. I’m sure marketers in any industry will know what I’m talking about.

The mobile app community is great, too. I get to be in touch with a lot of first-time entrepreneurs like me, and a lot of people who share my views on the world.

3. How do you see app marketing evolving?

CPIs have gone through the roof and search optimization has its limits, especially for games. If you take a look at Color Switch for example, the only reason the game is still popular now—over a year after it was launched, which is way above the average lifespan of any game—is because of the incredible amount of influencer marketing they’ve done and content they put out. For example, pages like Ray William Johnson’s regularly share silly videos with comedians playing the game, even for just one or two seconds in a 45-seconds video. These videos often get two to three million views, keeping their user base fresh.

Of course, not every company has the means to hire comedians like Ray William Johnson. But I’ve had a few clients who have hired lesser-known YouTube personalities to do more traditional influencer marketing, like product reviews. Developers should look for small, yet highly relevant channels they could promote their app on.

That Google Translate is the worst thing ever. That may have been true a few months ago, but if I were an indie app developer today, knowing as much about translation as I do, I’d save a good $150 by translating my listings with Google Translate, at least in German, French and Chinese—which are super accurate. Now that it operates with Neural Machine Translation, the accuracy is ridiculously good. Your listing may not always be search-optimized, but at least it’ll be well translated.

I may be biased, but I definitely think we’re heading toward a machine-translated world. Figuring out meaning, which seemed to be a problem for machine translation systems up until now, has almost entirely been solved, and I think the next step will be to teach AI to reproduce a brand’s style. If you look at Apple, for example, they use slang that has a sophisticated feel to it, with words like “ginormous” and others. Once AI learns from and adheres to company style guides, which shouldn’t be too difficult to achieve, you’ll have a machine translation system that performs much better than any human ever could.

It wasn’t published in 2016, but I discovered it just a few months ago: MyPostcard. Take a picture of the place you’re visiting, write a short message, and MyPostcard will print the card and send it to any address. Sure, it’s less personal than handwritten notes, but you get to choose the picture on your card (most of the ones you find in stores are ugly) and you don’t have to look for a place that sells postcards when you’re busy enjoying your vacation. Try it!

6. Tell us about your most challenging ASO “experiment.”

When we were doing ASO manually for one of my first clients, we had a hard time figuring out why we managed to do so well in France but didn’t seem to make any progress in Spain, a market that shouldn’t have been so different from France. I can’t give out too many details, but it turned out that the Spanish had a very different way of using the app’s main feature than the French did. Spaniards would pretty much only use it on holidays, while the French used it on a day-to-day basis, for work and a variety of people. As a result, the keywords they were using to search for such an app were very different. It took us a while to figure that out.

You know how some app store users add words to their base search query that describe the app’s target audience/use intent, for example, “kid puzzles” or “calendar for work”? In linguistics, these words are called descriptors. While this is not always the case, keyword descriptors can change from one language to another depending on how the target culture uses the app. It’s especially obvious when we generate keywords for a given app with our tool today: it’ll often output the same base keywords, but with a lot of different descriptors across markets.

7. Tell us about your experience with AppTweak and give us your favorite feature.

AppTweak was my first ASO tool! Of course, we use our own now, but I would definitely recommend AppTweak for how easy it is to use and how fast the data (traffic estimate, etc.) is populated. Similar ASO tools always take a while to populate their data, especially in foreign languages. I have to say, AppTweak nailed that part. And their reasonable pricing makes it a must-use for indies that want to find a good management tool for their ASO, on a budget.

8. Do you have any “masterchef” ASO tips?

This should be a given for any serious app marketer out there, but don’t try to rank for keywords you can’t rank at least #2 or #3 for. If you own a fitness app and your app is relatively new, there’s no chance your app is going to rank for “fitness.” My theory is that people don’t scroll past the third app when they search for something on the store.

When you do keyword research, you can also quickly estimate whether that keyword is highly searched for by going to the Google Play Store (or opening it up on your Android phone) and typing it in the search bar to see if it comes up in autosuggestions (you can also check Google/Apple auto-suggestions directly on AppTweak).

If it does, then it probably has at least some traffic. Use a VPN for other languages/regions, because autosuggestions aren’t the same in every region (AppTweak does offer auto-suggestions in over 70 countries). TunnelBear is my recommendation. Autosuggestions will also allow you to brainstorm tons of other ideas, just type “fitness a,” “fitness b” or “fitness c” in the search bar and you’ll come up with keywords like “fitness app,” “fitness and bodybuilding,” fitness app for girls,” “fitness coach” and “fitness challenge” in just 30 seconds!

These are my two best tips for anyone with a brand new app who wants to give ASO a try but can’t seem to find non-competitive keywords with high traffic.

Nathan is one of our youngest but yet experimented ASO Experts. His passion for translation has been reflected in the quality of his work, helping app developers and marketers to localize their apps effectively.

Want to contact Nathan? Find all details on his ASO Expert profile page.