Even though the launch of Disney’s streaming service was a much anticipated event, there was no predicting how considerable the impact of Disney+ on the Apple App Store would be. It took only one day for Disney’s newest app to reach top positions of the app store rankings, not only overtaking competitors such as Netflix or Hulu in the Entertainment category, but reaching first place in the general store ranking, where games are usually sitting in the top spot.

The impact of the launch was reflected in app store searches, as the popularity score given by Apple Search Ads for the keyword “disney” went up from an average 71 in October to 94 in the week after launch. The full branded term “disney plus” itself now gets a 96 popularity score compared to its 60 popularity score average from October. In comparison, these are higher scores than almost all of the most popular keywords in the US, including Facebook (94), Youtube (90) or Tik Tok (89), as only Snapchat (99) and Instagram (98) remain more popular search terms.

Bringing downloads to other apps as well

With such power on its brand name, Disney recorded impressive volume of downloads not only for its newest streaming service, but across many of its apps available on the Apple App Store. With more than 30 apps available for iOS US, the media giant could already be certain that no competitors would gain access to top organic search results for its brand name. However the launch of its streaming platform created a massive uplift in visibility and downloads for some of its other apps, as Apptweak observed with its download estimates tool:

DisneyNOW, My Disney Experience and Where’s My Water? 2 all experienced a peak in downloads on November 12, while other apps including Star Wars, Nat Geo TV and FXNow saw an uplift in downloads a few days later

Also impressive was the ability for Disney+ to successfully be featured in Apple’s Today Tab everyday since its launch. With 6 different stories that have totaled an estimate 57 million impressions in 7 days, Disney + was able to transform its vast catalog of movies and TV shows into a pool of content for Apple Store editors to highlight and convert in unmatched visibility and downloads. 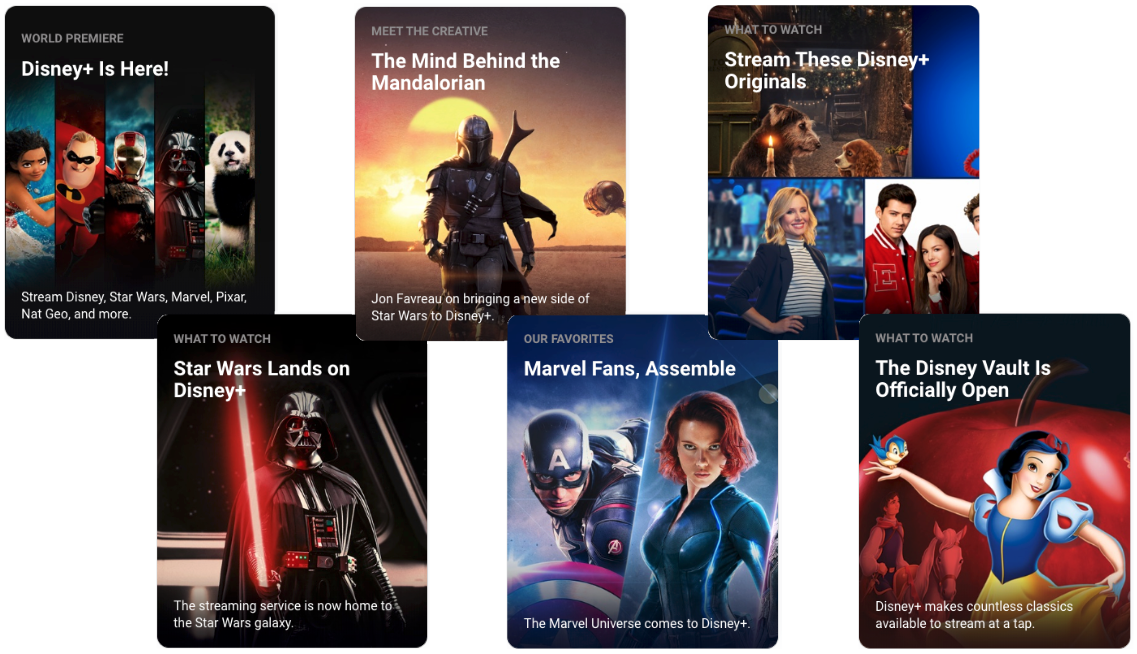 Disney Original, Marvel and Star Wars movies and TV shows have been the focus of stories in the Today Tab of the App Store all week after the launch of Disney+

Some of these stories also appeared in search results for terms including “streaming” or “original”, bringing more visibility to the app as well. Nevertheless, one of the few limits to the scale of Disney plus’ launch was that it did not (yet) appear in stories featuring competitors like Hulu, HBO Now and Netflix, which were more visible for keywords including “streaming movies”, “movies anywhere” or “tv shows”.

This remaining opportunity for even more visibility will be a topic to follow as Disney + has not yet explored all its options for its ASO strategy, and could turn its focus to generic search in weeks and months to come.

If you’re curious about our ASO tool, try it for free now or contact us to schedule a demo: