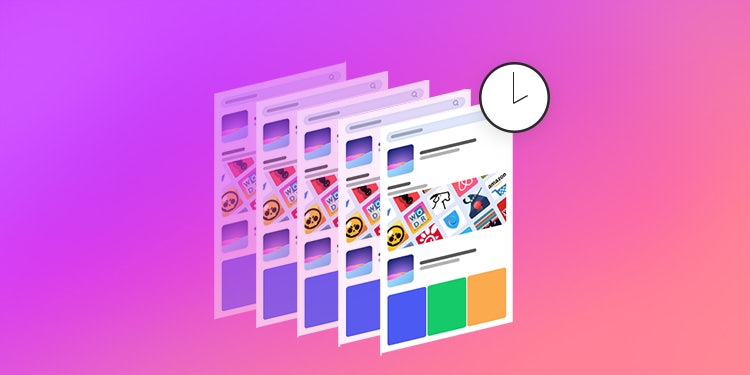 We’ve added an extra insight to our Live Search feature that allows you to view the top apps that were ranking on a keyword on a past date. That means that you can see how the top apps on a keywords have been moving on a date range of your choice.

View the top apps that used to rank on a keyword over any chosen date range with AppTweak’s Live Search in the Past.

Using Live Search in the Past in your ASO Routine

AppTweak now shows the top apps that used to rank on a keyword on a date range of your choice. This new feature can help you better understand app performance on a keyword or the volatility of app rankings on a word.

Did you miss it? We totally revamped Live Search!

For example, imagine your app has been losing visibility on a keyword over the last couple of weeks, this means that other apps have taken over and have somehow managed to perform better than yours. Who are those apps? What have they done to overtake your app on that keyword? We believe Live Search in the past can really help understand the ranking movements of apps on a word over time on and identify those that have had better performance.

Past Live Search on the keyword “train” (iOS - US)

For example, the app Transit has been losing ground on the keyword “train” in June after the new player Train Taxi appeared in first position. It was overtaken by the apps Dumb ways to Die, Google Maps and Monster Legends.

Once you’ve identified the apps that are performing better than yours on a specific keyword, you might want to analyse them more closely to find out what has been their latest ASO strategy. You can use our Overview section to check out their metadata and creatives: are they using different keywords in their title / subtitle? Are their creatives more relevant to the searched keyword, leading to a higher conversion? Is there a pattern across these apps that have overtaken yours?

Quick tips on how to monitor your competitors’ strategy

You can also check out our timeline feature to monitor the latest changes these apps have been doing. Did they recently add keywords to their metadata or adapt their creatives? What changes have they made that could result into a keyword rank boost?

Spy on your competitors’ app updates with our awesome timeline feature

Past Live Search on the keyword “game of thrones” (iOS - US)

In the example above, we found there was a considerable change among the top apps that ranked on the keyword “games of thrones” on April 16th. The app HBO Now was propelled in 3rd position, while Middle-Earth was kicked out of the top results. When we look at the apps that rank under the 10th position, we see totally different apps after April 16th. Mid core apps were replaced by hyper casual games.

5 tips to keep track of your app’s ASO performance

Live Search in the past can also give you an idea of how stable or volatile the rankings on a keyword are. Is it always the same apps in top 5 results? How long have those apps been there? A high volatility on keyword can mean that it’s easier to rank on that word, but also more difficult to keep your app in top results on a long term.

Check out the most used keywords per category

For instance, we compared the Top results for the keyword “games” 6 months ago vs. last month and did the same for the keyword “coloring apps”. The top results for “games” were totally different, whereas the ones on “coloring apps” were quite similar. This shows the importance of targeting keywords that aren’t too volatile in your ASO strategy, so that your app has a chance to keep its ranking position on the long term.

Comparing the Top search results for the keyword “games” 6 months ago and last month.

Comparing the Top search results for the keyword “coloring apps” 6 months ago and last month.

We did the same exercise on big branded keywords. As expected, the n°1 result is very stable, but that isn’t always the case for the rest of the apps that rank in the top 10. For instance, on “snapchat” on Fun FaceApp managed to remain in top results.

Comparing the Top search results for the keyword “snapchat” 6 months ago and last month.

Facebook however has managed to block outsider apps from the top results on the word “facebook” over the last 6 months, resulting in only Facebook apps ranking in top results for the brand. The top 10 results haven’t budged over the last 3 months.

Comparing the Top search results for the keyword “facebook” 6 months ago, 3 months ago and last month.

Live Search in the past can really help you grasp the dynamics of a keywords before you decide to target it. In just a click you know if that keyword is already saturated or if there’s a place to occupy. Check out the Past Live Search of your top keywords on both the Apple App Store and Google Play Store!