Monitor your ratings over time and compare them with competitors

Analyze your ratings over time

Our new Ratings section will display how your ratings evolve over time. It is really important to analyze trends in your ratings to determine whether your app is gaining or losing popularity on the app stores.

Looking at the Among Us game (iOS, US), we see that its average rating is lower than for the top apps in the Games category.

If you want to increase your app’s average rating but don’t know how to identify the efforts needed, you can try our Assess your app feature.

In this example, to reach the same average rating as the top apps in its category, Among Us will need to receive 22,738 more daily 5-star ratings for one month.

When you look at the graph section, you will see that AppTweak has divided this part into 3 main graphs. The first shows you the number of ratings gained per day/week/month (you can change this option on each graph). You will also see the evolution of average ratings over time, showing you how ratings gained have impacted your overall rating.

In the example below, the Among Us game received a lot of negative ratings at the end of March and the beginning of April 2021. This resulted in a decrease in its average rating, going from 4.48 to 4.21. 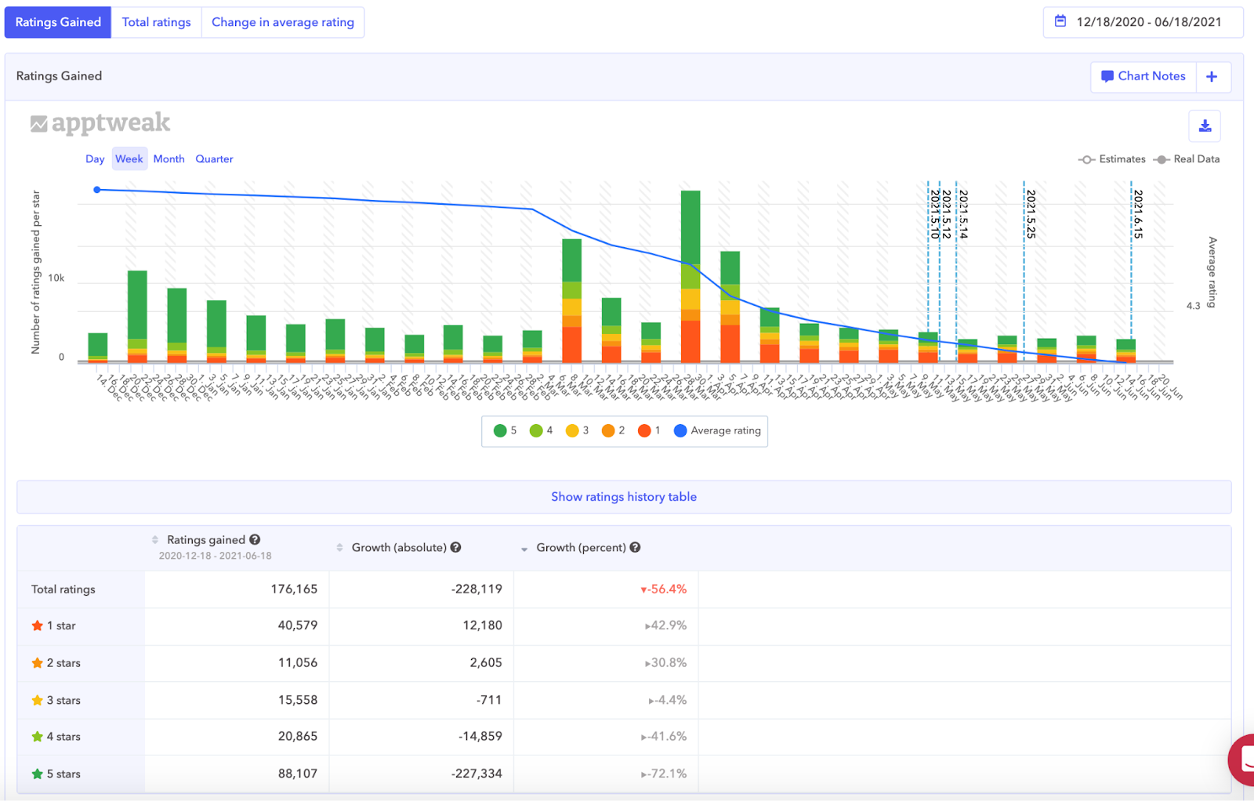 The second graph in this section will show you an aggregated view of the total ratings. This will help you understand how your overall ratings evolve over time. 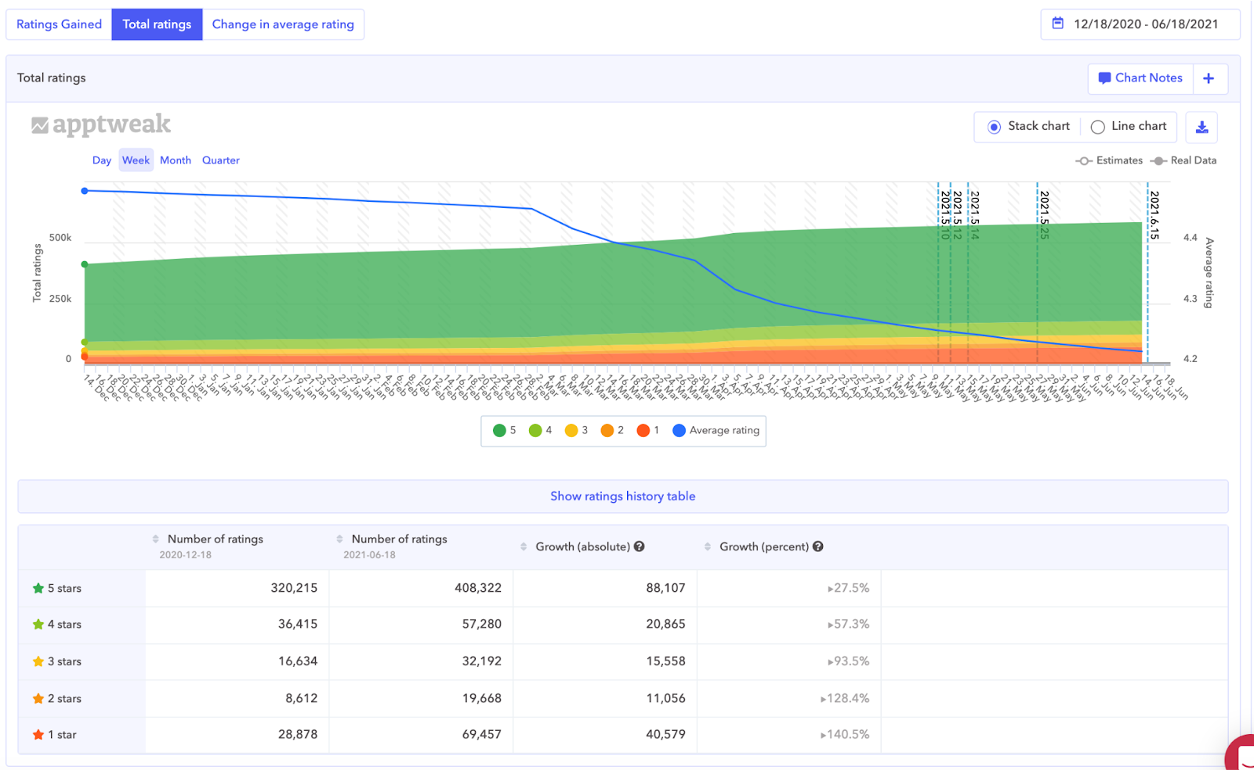 In the last graph of the My Ratings tab, you will see the Change in average rating. The goal of this graph is to quickly pinpoint the day/week/month in which your app lost/gained the most average ratings. For instance, looking at the monthly view for the Among Us game_,_ we clearly see that March and April were the game’s worst months. This suggests that something happened in these months that caused the game to receive a lot of negative ratings, such as a bad marketing strategy, a new update, lots of bugs, etc. Thanks to AppTweak, we are able to dig deeper to identify the cause of such a decrease.

Compare your performance with competitors

Once you have analyzed your ratings, you can spy on your competitors (or other apps from the same publisher) to see how well they perform compared to your app.

The first section shows your app’s current ratings; the competitor view shows you the current star spread and average rating of all your competitors.

In the case of Among Us, we clearly see that the competitors selected have a more positive star spread. In addition, the game has the lowest average rating compared to the group of games selected.

Since the default view will show the spread in percentage, these results can be skewed if some apps only have a few ratings. That’s why selecting the option Ratings (total) shows the total number of ratings per app. In this case, Among Us has the lowest average rating and holds the 3rd place position in total ratings.

In the graph section, you will be able to see either the average rating or the total ratings per app over time.

Compared to its competitors, Among Us is clearly lagging behind in terms of average rating; however, this wasn’t always the case. The graph below shows us that the game was almost at the same level as its competitors before March: 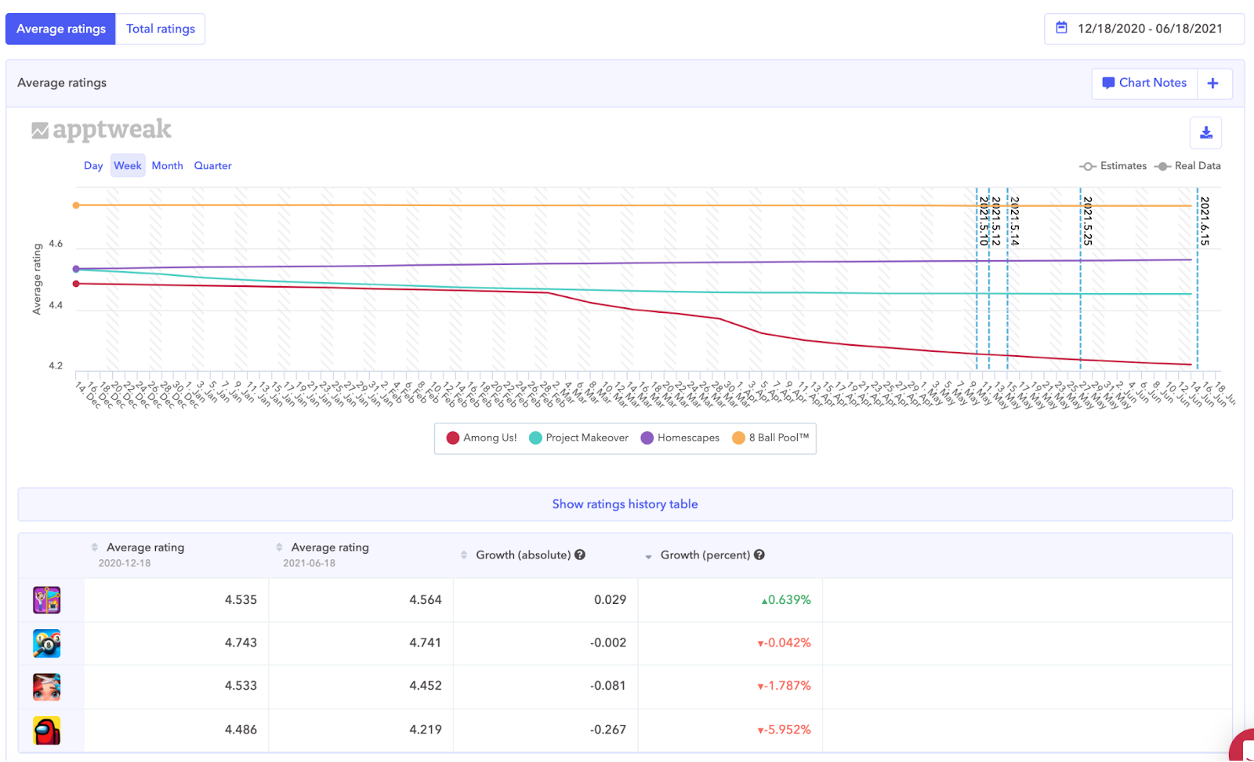 In the Total ratings tab, the summary table explains how many new ratings each game received; above all, it shows the evolution of the star spread. In the case of Among Us, it makes sense for us to see more 1-star ratings at the end of the period. 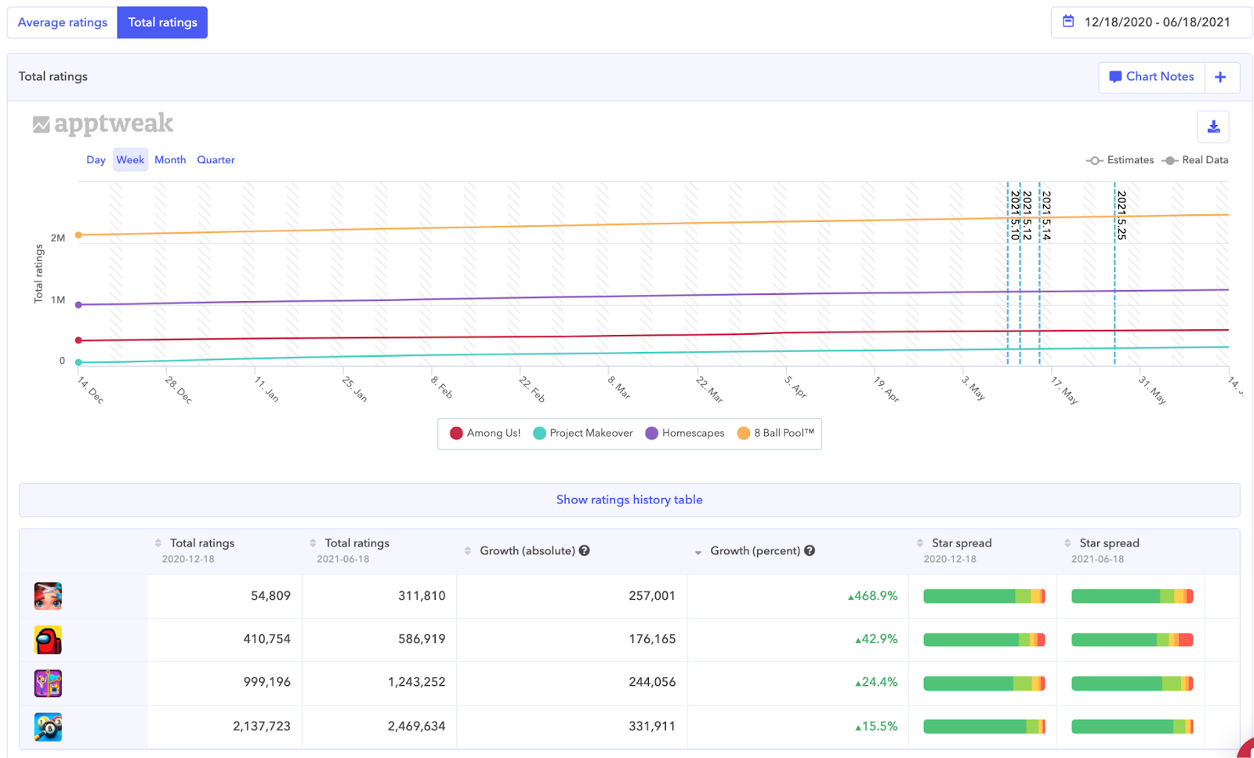 Thanks to our new Ratings section, you have access to many new insights! Here is a summary of what you will now be able to do:

This blog was the first in a series of 3 blogs highlighting each section of the Reviews & Ratings tool. The next will be about our upgraded Reviews section; stay tuned!