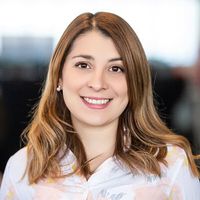 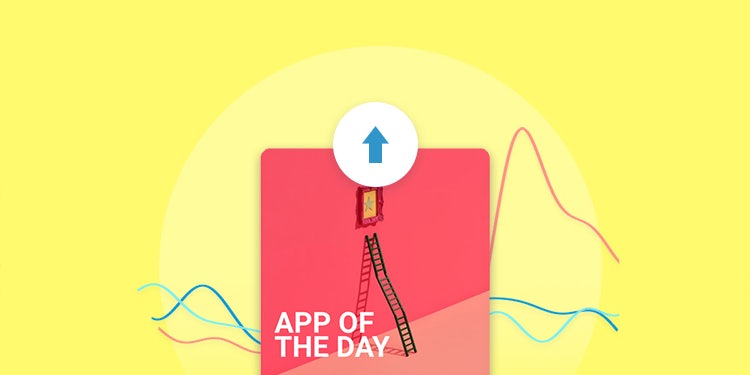 In the App Store, Featured Apps are those apps that have been selected by Apple’s editorial team to promote certain apps and games to users. They are found in the tabs: Today, Games and Apps.

They continue to be a hot topic in the App Store because they boost the visibility and downloads of an app.

Therefore we have gone further in the analysis and done some extra research to identify what is the real impact in category rankings and the number of downloads during and after the featuring.

This is what we found:

1. In most of the cases, category rankings tend to decrease after an app is featured in the store

As it may be logic, we were expecting that the number of downloads would be impacted by the featuring with a great boost of impressions. However, we were surprised to identify some cases where the category ranking drastically fluctuated by the featuring.

Check out more insights on category rankings and volatility

Following that, we found several examples where there was a negative impact in category rankings after the period of the Featured Story.

2. However, fluctuations in the category rankings are compensated with a huge peak in downloads

Despite the fluctuations, the negative effect was compensated with a huge peak in downloads and higher category ranking positions during the period of the featuring.

Understand more about the impact of featured aps

3. The impact of the featuring tends to be only temporary and the category ranking can decrease to a level lower than before

If your app is soon to be featured it is essential to understand that the impact of the featuring tends to be only temporary.

For example, we examined the case of “Series: Your Story Universe “ in the USA, which was featured on the 11th August and the 31st August as “Game of the Day” in the Today tab.

Thanks to this featuring, the app had a peak in the category ranking for Games, Role-Playing & Simulation. However, between the two Featured Stories on the 11th and 31st of August, the category ranking actually decreased to a level lower than the one previous to the ranking.

4. During a featuring, your app could get 5 more times downloads than it usually does

On the other side, we also saw that there was a huge peak in the number of downloads thanks to the visibility from the featuring and estimated that the app got around 5 times more downloads on the day of the featuring than it gets on average. On both dates, we also estimated around 4,8M views per story.

We also estimated that the number of downloads was impacted after the period of the featuring.

5. The increase in the number of downloads mainly relies on the tab where your app is featured in the App Store

Additionally, we identified that the app JAWS.io was featured between the 12th of July and the 18th of July in the Games tab (Beat the heat), and on the 30th August as “Game of the Day” in the Today tab.

We also identified a peak in the category ranking for Games, Casual & Action. We saw the same behavior with a peak in the downloads thanks to the visibility from the featuring. 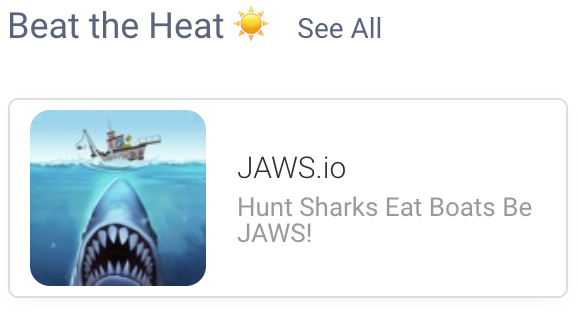 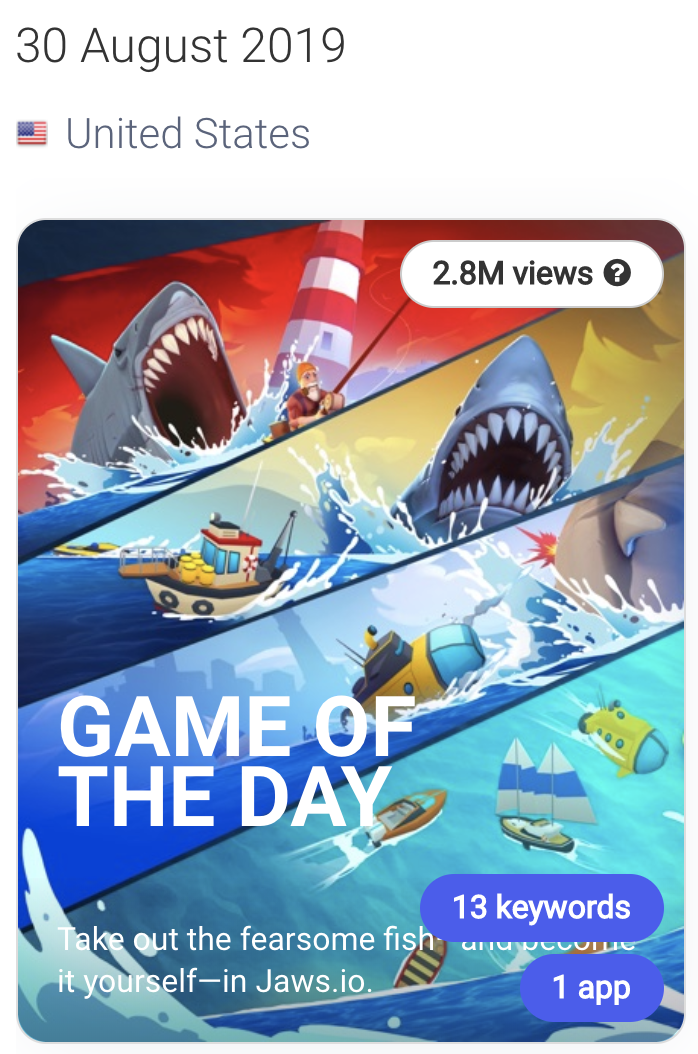 Furthermore, Astound - Voice & Speech Coach was also featured as App of the Day on August the 22nd in the Today tab with an estimate of around 2,2M views. We also estimated a peak in the category ranking in Health & Fitness and peak in the downloads thanks to the visibility from the featuring (more than 20 times more downloads thanks to the App of the Day featured story!) 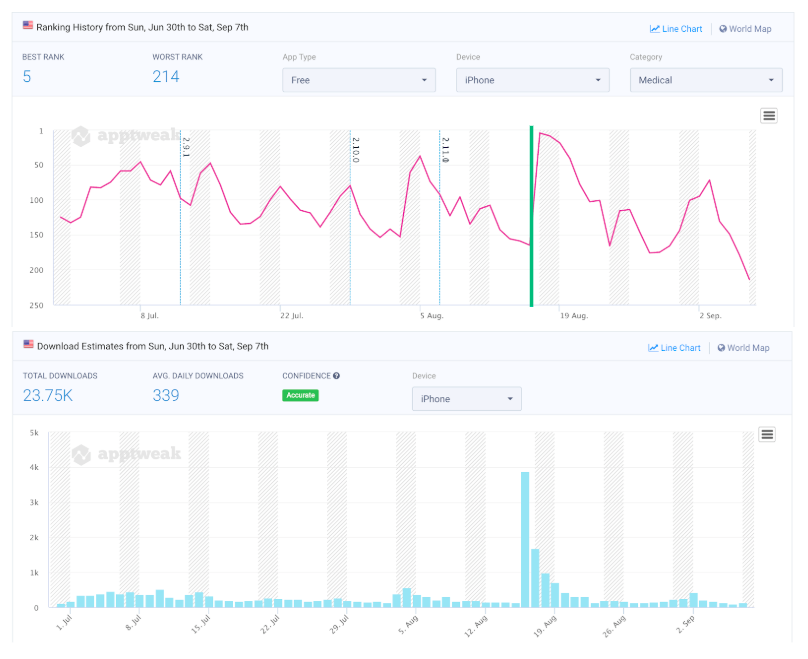 Although the effect of a Featured Story tends to create huge peaks in terms of impressions and downloads, you might be probably asking yourself what can be done to prevent big drops and fluctuations after this effect is gone.

The answer to this can be a bit tricky. Ideally, you should try to maintain the featuring for a long period, even if it’s not in the Today Tab:

For example, Calm had a boost with an “App of the Day” featuring, but also had a longer run featuring in the “Apps” tabs.

In fact, “Calm” was featured in the Apps tab, in the section “Great on Apple Watch ⌚” since June as App of the Day the 26th August and “Life Hack” on the 16th of July. During those dates, we saw a different behavior than on the previous cases, as we estimated softer changes in the category ranking (Health and Fitness) and in the number of downloads. 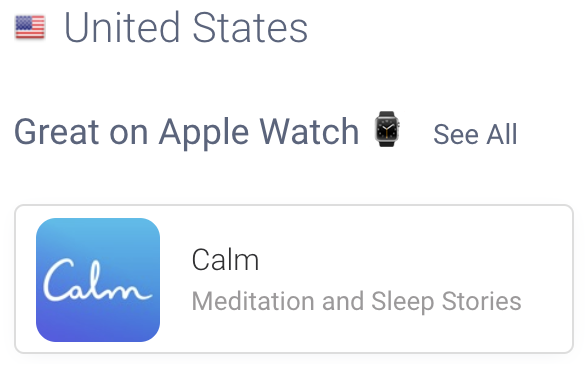 6. To prevent fluctuations in category rankings and downloads, think strategically about the tab where your app will be featured and develop a long-term sustainable ASO strategy

In general, even if this second featuring might bring your app fewer views than the “Today tab”, it can help you maintain more visibility in the Browse in the longer period.

Finally, keep in mind that the Featuring, as well as a Search Ads Strategy, provide a strong boost in impressions but only during the period of the featuring or the Search Ads campaign. This means that as soon as it stops, your impressions will naturally drop.

Therefore, ASO is the main way to build a long-term strategy. ASO consists of a long-run process, but it will help you build visibility in the store and help you maintain your category ranking.

How to Prepare for New Google Metadata Policy Changes