How to localize your app in French

Following previous articles in our Localization blog series, today we will explore the French language. French is among the most popular languages supported by the App Store other than English. France and Canada are the two main markets in which you can target French-speaking audiences on the app stores. Both countries are considered very attractive game markets and rank in the top 10 of game revenues.

In France, the majority of mobile operating systems are Android. According to Statcounter, since October 2020, Android’s market share has constituted around 66% and 67% of consumers, while iOS’ share has remained around 32% and 33%. Other operating systems have little to no share in the French market. 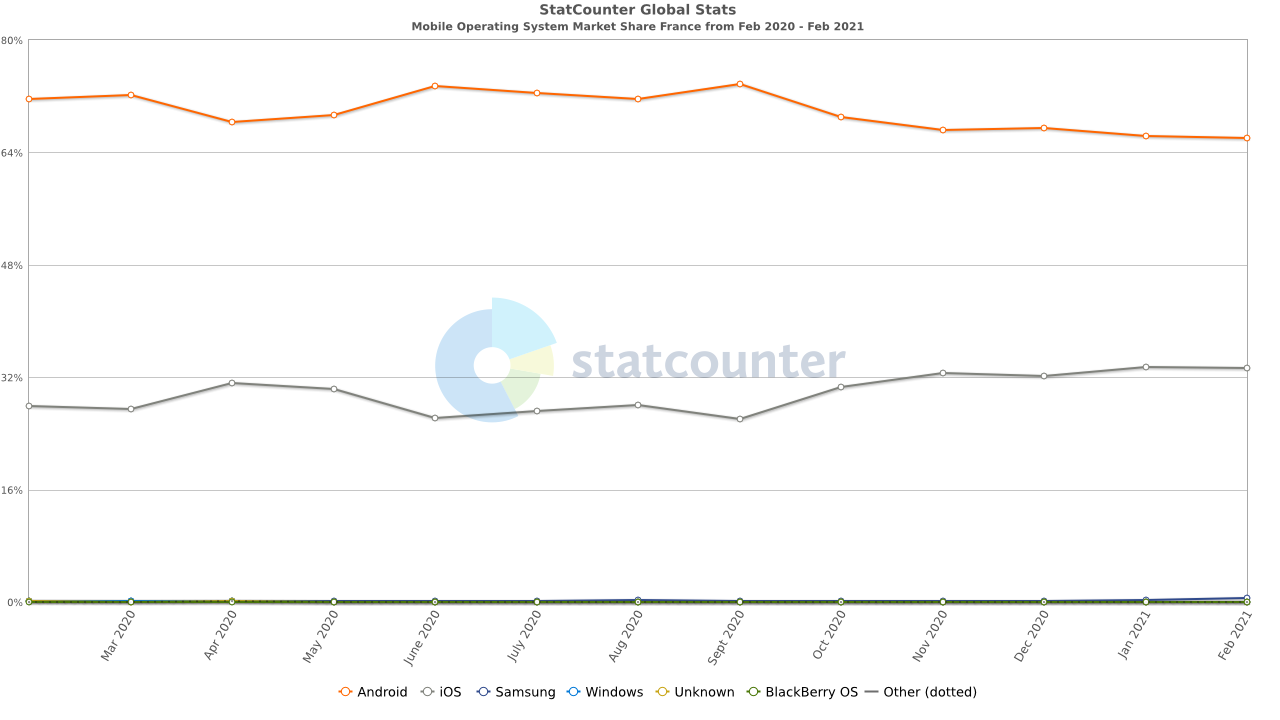 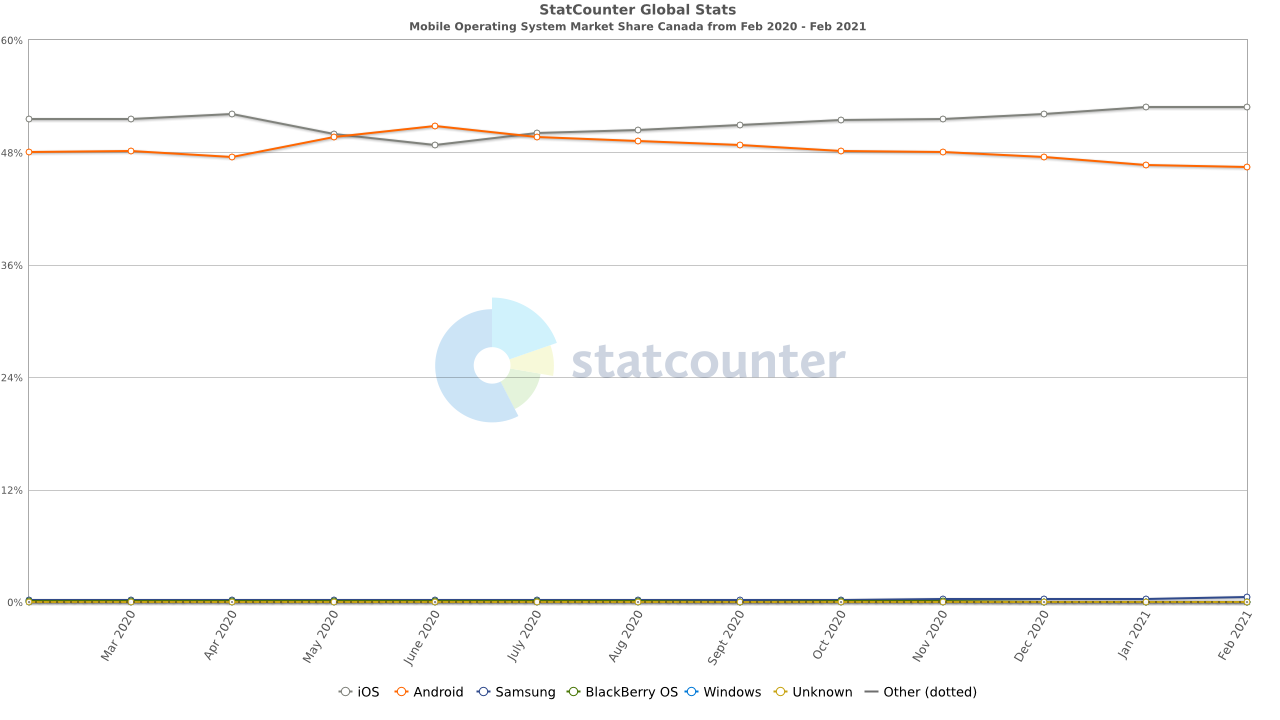 Nonetheless, French publishers put more effort into having their apps or games available on both stores: 42% of French apps or games are published on both Google Play and iOS, compared to 22% for apps in general.

In France, apps’ top charts are shared between local and non-local developers. French apps usually occupy up to half of the top 10 in category rankings, but many apps from non-French developers rank in the top 3. In Canada, even more apps in the top 10 are from other markets. As a result, there are plenty of opportunities for non-local app developers to rank highly in both markets’ top charts.

Apps from French developers in the Top Charts of the Lifestyle, Finance, and Entertainment categories on Google Play (March 16).

On the other hand, French developers and publishers have much less visibility in the top 10 positions of game categories. A strong majority of games in the French market are from non-French developers, such as from big game development and publishing companies like Supercell, Playrix, or Nintendo, amongst many others.

French developers that appear in the Adventure, Action, and Racing game categories are TapNation and VOODOO, two hyper-casual game developers. The quantity and popularity of hyper-casual games in French game top charts is striking, as demonstrated in the image below.

Games from French developers in the Top Charts of the Action, Adventure, and Racing games categories on Google Play (March 16).

When we look at the 20 most searched keywords in France in 2020, we can see that the majority are related to non-French brands and, more particularly, two categories of apps:

Overall, non-local apps and games can have a strong store presence in France and Canada.

Translating Keywords Between French and English

Although metropolitan French speakers are rather proficient in English, they would generally prefer to use their native language over English when browsing the app stores or searching for an app. French keywords usually have higher search popularities in France compared to their English counterparts.

Comparison between French and English keywords for word games.

Still, the French language is borrowing an increasing amount of words from English. Anglicisms are very common and a lot of English words have already made their way into casual French conversations. The excessive use of English words in French even has a name: Franglais, a mix between the words français (French) and anglais (English).

Another complication here is that some anglicisms keep their meanings when used in French, while others do not:

Example of anglicisms with the same meaning in French as in English:

Example of anglicisms with a different meaning in French, or that are not used at all in English:

This is precisely why you should always have a native speaker correct your texts when you are entering a market with a new language. First, of course, this will help you check for any grammar or spelling mistakes, but it will also ensure your texts sound fluent to the native speaker’s ear.

How to Use Accents for Generic Keywords

There are many accents used in French, especially on the letters e, a, and i. When optimizing your title and subtitle/short description, you might wonder if keywords have better search volumes with or without accents, and which version is better to target. In French, accents generally do not change a word’s meaning, so you could consider dropping the accents without worrying about completely changing the meaning of your metadata.

There is no overall rule as to whether keywords are predominantly searched with or without accents. The best practice is to use an ASO tool to check the popularity of each keyword on a case-by-case basis.

If we continue with the example previously mentioned to observe the different translations of word games, we can see that mots croisés and mots mêlés are mostly searched with accents. However, we see that mots fléchés has a slightly higher search volume without accents.

Search volume varies depending on whether the keyword has accents or not.

Games that target these keywords all use the accented versions in their titles and subtitles and rank for both versions of the keywords. The differences in rankings are more linked to the keywords’ search popularity, which is linked to its competitiveness, than to the version that is targeted in the title.

CodyCross is ranking on the keyword “mots croisés” with and without an accent.

Be careful – although it might not be too shocking to drop accents in your title or subtitle if search volumes motivate this choice, dropping the accents could be perceived as a mistake. This may weaken the users’ perception of your app in longer sentences, like the descriptions.

The main differences between French in Québec and French in France concern accents and intonations, the vocabulary used, and cultural references. Canadian French people employ more local idioms and expressions which are not shared with metropolitan French people. For example, in Canadian French, “ma blonde” means “my girlfriend”. However, in metropolitan French, this only translates to “my blonde”.

Also, given their proximity to the United States, French speakers in Canada are much more proficient in English and have adopted many English words, especially in informal spoken Canadian French. As a result, borrowed English words are even more obvious in spoken Québec French than in metropolitan French and are not considered particularly negatively, unlike “franglais”. Furthermore, Canadian French also contains some indigenous vocabulary.

Overall, both versions of French are based on the same grammar rules. French Canadians can also perfectly understand any text written for metropolitan French.

How to Localize Your Metadata for a French Market

Apps or games generally do not translate their brand name, but do translate generic keywords that are targeted in their titles and subtitles.

One thing you should consider when translating your title and subtitle in French is the length. You may not be able to target as many keywords in your main metadata fields in French as in other languages. For example, translating from English to French will generally require more space, particularly because of the use of determinants, prepositions and articles between words.

Candy Crush Soda Saga’s subtitles in the United States and France on iOS.

As previously stated, the use of English in French can be tricky to understand; now, it is common to see an English word in the middle of a French sentence. As a result, some English words can have good search volumes and generate a high amount of traffic on the app stores. For example, in its title, the NBA app employs several English words which all have very high search volumes in the French market: “basket” (meaning basketball), “news”, “live”, and “match”.

Again, determining which word should or should not be used in a foreign context is best done with the help of a native speaker.

Localization of the Official NBA app in France on Google Play.

The keyword field can be used to target English keywords with good search volumes but cannot be added to the title or subtitle, perhaps because mixing the two languages would not seem natural.

When translating your long description – or any other longer texts in your app or game – be careful of the many formatting differences. Here are the main differences to be aware of:

How to Localize Your Creatives for a French Market

Most Western apps and games do not change their icons when localizing in France. As for apps from countries with many cultural differences, such as East-Asian countries, these apps usually keep a consistent logo for Western markets in general, instead of a logo specifically for France.

Besides, apps and games do not typically include their brand name in their logo.

With Google Play custom store listings, you can adapt your app store listing to a specific market with adapted creatives and metadata.

Similar logos in the US and France for games ranking in the Games-Strategy category top charts.

Incorporating cultural references and adapting the content of your screenshots for the target market can help optimize your app’s conversion rate. Rather than just directly translating your content, you should try to understand what specifically interests this market. For example, in the image below, we see that Wattpad adapted its second screenshot on Google Play to feature a story available in French on their app.

Wattpad screenshots in the US compared to France.

App screenshots in France usually use darker and more straightforward designs. They use simple fonts and don’t include too much information within each screenshot. Captions are longer than in English, especially for apps, so it is important to keep them easy to read to find a good balance between quality and user-friendliness. Most of the time, captions are placed at the top of screenshots.

In terms of structure, the first screenshots are often connected to form one consistent image, as seen in the Wattpad example above. The first two or three screenshots usually transmit the aim of the app before highlighting the features in more detail.

Structure of app screenshots on the French market, example of Too Good To Go and WeWard.

For games, screenshots in France or Canada are not widely different from those in other Western countries. Most of the time, screenshots demonstrate real gameplay and use simple captions.

We hope this article helped you better understand the best practices to localize your app in French on the app stores. For more advanced ASO tips about localization, check out our other blog posts and stay tuned for more!