Market Intelligence: A state of the EU Finance market

This week we wanted to share another set of insights from our Market Intelligence Add-On, this time focusing on the Finance sector in the EU. Our research reveals how different each country is, with very local leaders. It also showed that results can vary significantly between the Apple App Store and the Google Play Store.

To carry out this analysis, we selected 11 European countries and had a look at Market Intelligence data for the Finance category of both the App and Play Store. Using the different features of our Market Intelligence Add-On, we came up with the following insights.

We first had a look at the top-performing apps in each country and found two major learnings:

These results show how local the mobile finance sector can be, with each country having its own specificities and local leaders. In fact, Paypal, Revolut and Google Pay, are the only apps that have managed to reach the top charts across all selected countries, the others only ranking in one specific country.

Check out Market Intelligence in AppTweak!

If we look at the total downloads that these leading apps drive, we found that Сбербанк Онлайн actually drives more downloads in Russia alone than other leading international apps like Paypal, Revolut and Google Pay drive across all EU countries.

As we can see, Сбербанк Онлайн accounts for 6% of total downloads of the EU mobile finance market against less than 5% for international leaders such as Paypal, Revolut and Google Pay. This already gives us an idea of the size of the Russian market against other European countries.

Get more insights now from our sample markets in AppTweak

Given the conclusions of the previous takeaway, we wanted to compare the size of each EU country in the mobile finance sector (in terms of daily downloads). We were surprised to find that Russia wasn’t in top position. This suggests that most of the downloads are concentrated towards one leading app in Russia, but are spread across several leaders in other big EU markets such as Germany and the UK.

Still comparing the share of downloads of these EU countries, we were surprised to find such a difference between the App and Play Store.

We were impressed to see that, although the UK is the country that drives most downloads from the finance category on the App Store, it is only in 4th position on the Play Store. This suggests that there are significantly more iPhone users vs. Android users in the UK compared to other countries.

We see the exact opposite trend for Germany. Germany is by far the leading country in the Play Store finance category, accounting for 40% of total downloads (vs. 16% on the App Store). This leads to believe that, as opposed to the UK, the Germans tend to be more Android-oriented than iPhone-oriented.

Finally, we were also surprised to see that Italy was in front of the UK when it comes to the download share of the Play Store finance category. This suggests that Italy is quite a big market on Android.

To finish this analysis, we had a quick look at the seasonality trends. We found that all EU countries followed the same trends, with a peak of activity during the week (Wednesday is the best day to run Search Ads if you’re in Finance!) and top month around January. 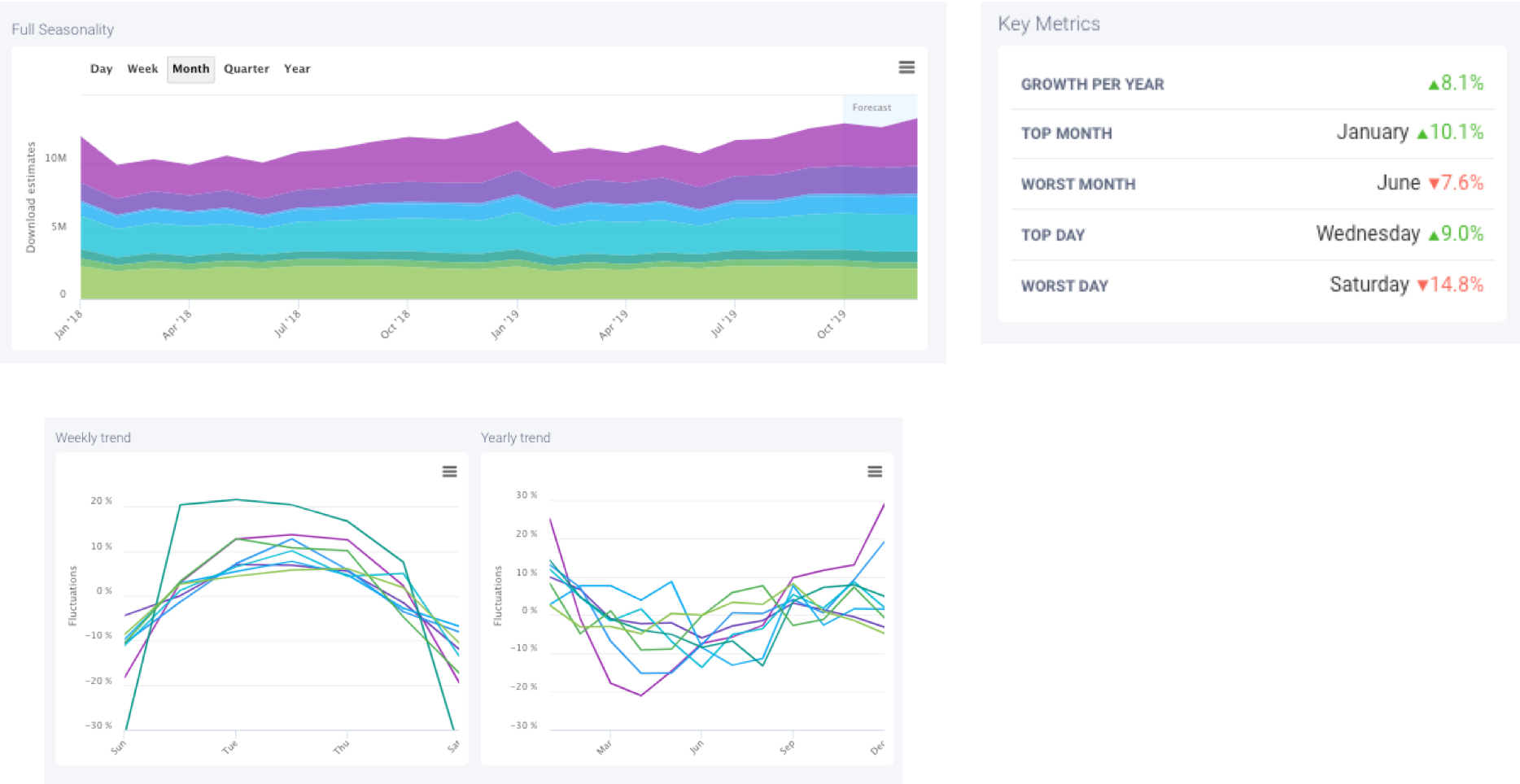 The seasonality of the Finance Category in the EU

Looking closer into the data, we found that some markets had more variations than others. For instance, Spain is the country with the biggest difference in terms of average daily downloads from finance apps during the week (+20%) vs. during the weekend (-30%). When it comes to yearly variations, France is the most volatile (+29% in December against -21% in April). Germany is the most stable country in terms of average downloads across week and year.

We hope you’ve learned something new today! If you’re curious to learn more about the Finance category in other countries, or if you’d like to analyze a totally different category, don’t miss our Market Intelligence Add-on!

Top ASO Lessons to Learn From Monitoring Your Competitors

How to Use AppTweak Before Your App Launches in the Stores

How to Add Keywords to Your App on Google Play