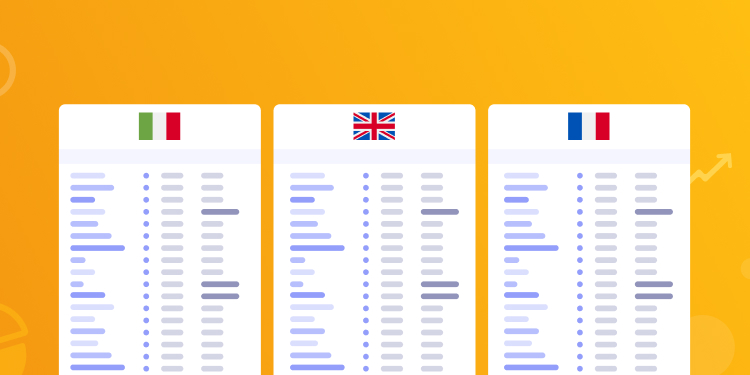 Keywords are now available on App Intelligence! This means that you can follow keywords across different languages and countries to keep track of your app’s visibility. A feature very requested by those who don’t have the time to regularly monitor their app’s keyword rankings in every country. 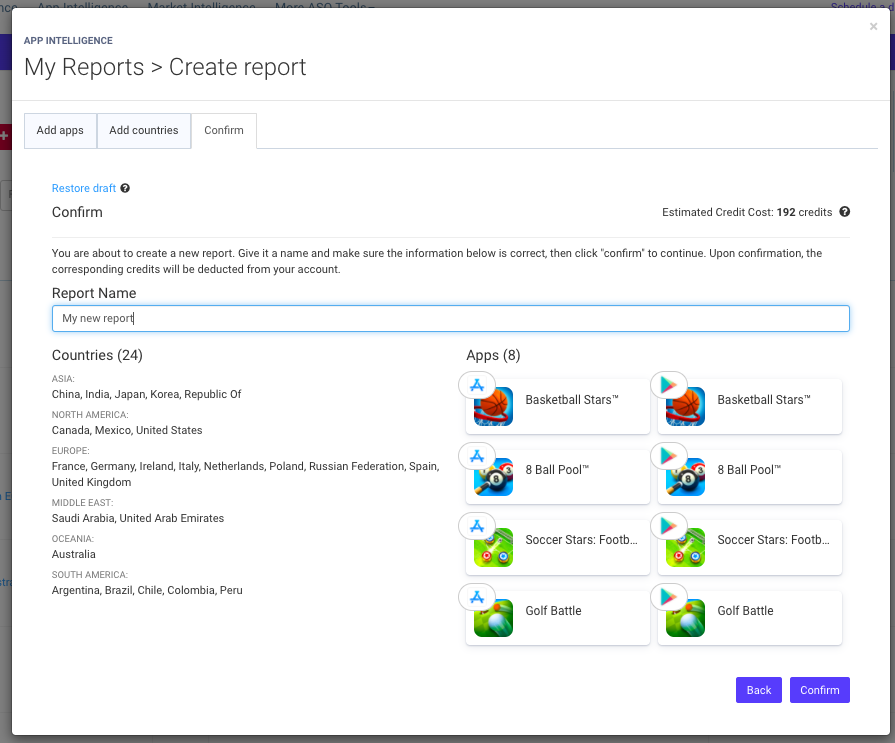 For the second step, we will jump into the keyword section of App Intelligence. 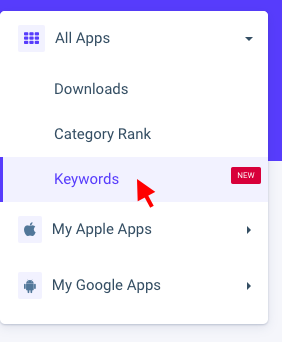 By default you’ll see that a set of keyword lists have been generated automatically. There is one list of 15 keywords per country-language combination. This means that for each country you’ll have a list for the corresponding languages. For example if you take Canada, you’ll see that you have one list of keywords for English and one for French.

To build these lists we took exclusively keywords from the apps’ metadata, starting with the title keywords, then subtitle keywords and description keywords until the 15 keyword slots are filled.

Keep in mind that these keywords are generated automatically, that’s why for the third step I would recommend taking the time to go through the lists and edit them if necessary to make sure that they include the most relevant keywords for your app!

This preparation can take a bit of time but it’s really worth it because once you have your report and lists set up, it will make the whole analysis much more interesting!

Now let’s explore the valuable insights we can get from this feature. Basically, there are three main ways to analyse this cross country view.

First, you may want to track your most relevant keywords (usually keywords that you target in your metadata) per country and language. Each country-language list is independent and can have completely different keywords than the other lists.

What’s nice about this is that you can really monitor your app in lots of countries at the same time. However be careful when comparing KPIs between countries because there are different keywords behind those metrics that are not necessarily comparable.

In the example above if you look at Germany and Italy you’ll see that the total installs in Germany is much higher than the installs in Italy even if some rankings are higher in Italy. This is simply because Germany is a larger market and not because Italy is performing poorly.

That’s why it can be useful to look at the stacked graph of the total daily installs. In this graph we will sum the installs from the keywords in each country-language list instead of comparing them.

Compare the same keywords across different countries and languages

The other way to look at this feature is by comparing the same 15 keyword list in different countries.

In this example, we want to track 15 Spanish keywords across Latin American countries to compare their popularity and the ranking of Basketball Stars.

An easy way to compare them is by looking at the position map of the keyword visibility across countries.

This chart is a three dimensional representation of the number of ranked keywords (x-axis), the average volume (y-axis) and the total number of installs (size of the bubble).

In this example, we can see that Mexico is by far the largest country. Mostly because the brand “Basketball Stars” is not so popular in other Latin American countries.

Compare one keyword across different countries and languages

Finally, you may just want to compare one keyword, like your brand for example, across various countries. Then by clicking on the small graph icon next to the keyword, you’ll open a pop-up window with a detailed view of the keyword stats and history. 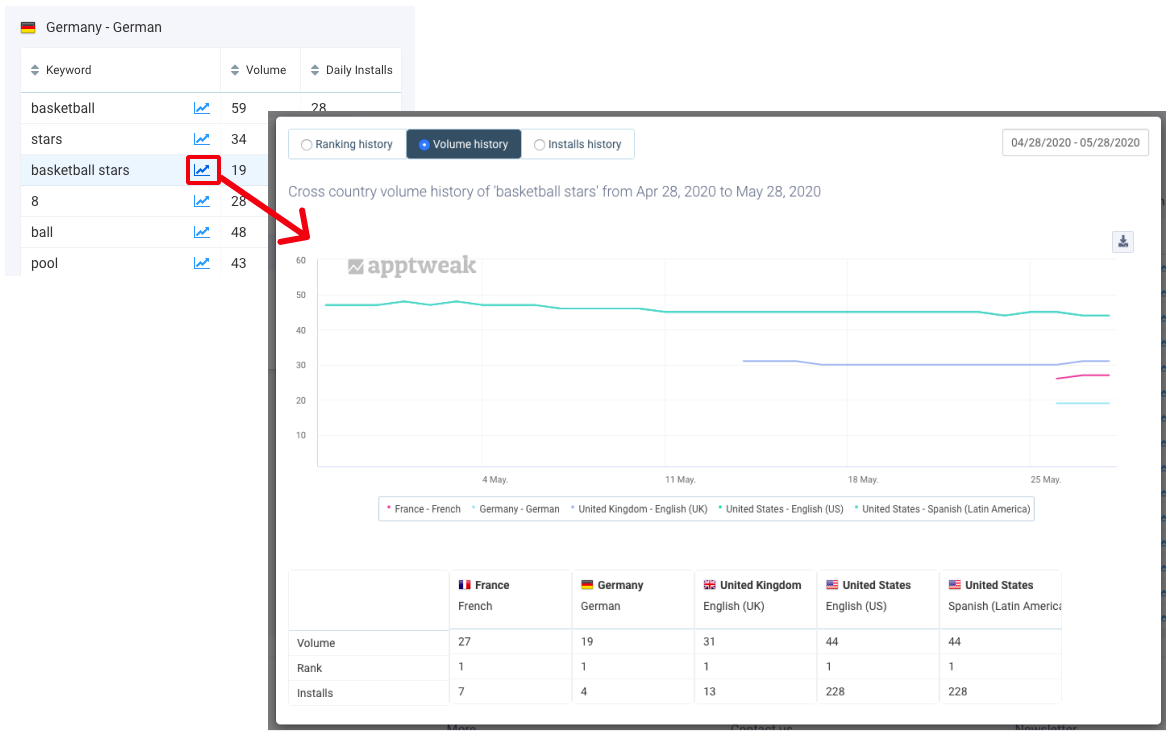 In this detailed view, you’ll be able to compare the volume, rank and estimated installs of the keyword in all the markets that you follow in your report.

In this example, we can see how the keyword “basketball stars” performs in the top countries. Naturally, the app is ranked 1st in all countries since it’s the brand name. However, we can see that the search popularity is very different depending on the country (44 in the US vs. 19 in Germany). At the moment these numbers seem stable but we might want to wait a bit to have more historical data and see if the volume is growing in European countries.

What’s so special about this feature?

Get the bigger picture

This is the ASO report that you’ve been dreaming about! In App Intelligence you will gather only the most important KPIs not only relating to category rank and downloads but now also keywords.

Save precious time for monitoring

Set up your monitoring dashboard by including mostly keywords from your metadata and don’t forget to edit the lists again as soon as you update your app’s keywords.

While you’ll always need the keyword tool for keyword optimization, this tool can be a great 15 minutes ASO routine to monitor your keyword rankings worldwide.

Create a report for your app and include as many countries as possible. This way you’ll track new markets where you (or your competitors) don’t do much ASO yet and where you actually have no idea of whether your app is doing good or bad in terms of keyword visibility.

We recommend that you take the time to do a little keyword research to make sure you have good relevant keywords for each language.

By using the position map you’ll see pretty quickly the countries where you might need to localize or update your metadata. For those countries a deeper keyword research will be required. Of course you may also get some nice surprises! Since most developers don’t put much ASO effort into smaller countries, the keywords are usually less competitive and it’s easier to rank high.

We hope you are as excited as we are about this new feature. We believe it has a huge potential so we would love to hear your feedback and suggestions when you’ll start playing with it!