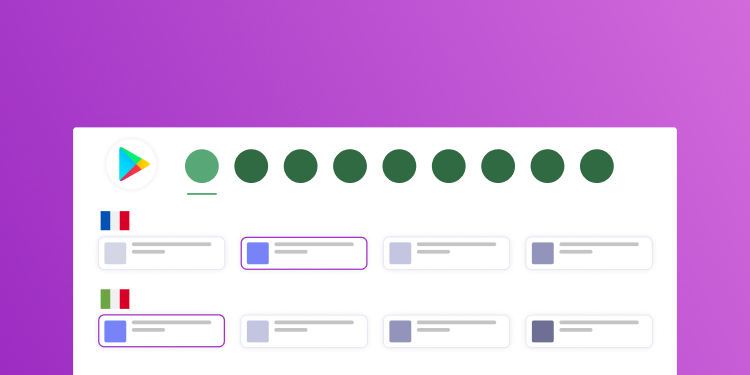 We already offered featured apps for the Apple App Store, but we have now enhanced this feature by adding featurings from the Google Play Store! Discover where and when your app has been featured. Being featured implies receiving more impressions and gaining visibility, this is why it is important to follow the featuring trends in each store. Let’s dive into this new addition!

Get an overview of the most featured apps

First of all, let’s see where you can find the featured apps across countries. You need to go in the More ASO Tools section and click on “Featured Apps”. 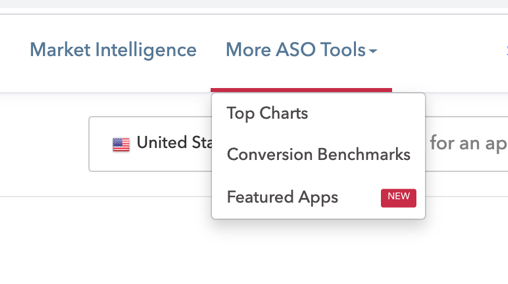 Then you will have to change the store to see what is happening in the Google Play Store.

In the default view, you can see the apps that were featured most across all categories in the following countries: the United States, United Kingdom, France, and Germany.You can also choose to see featured apps for the country of your choice by using the filters. 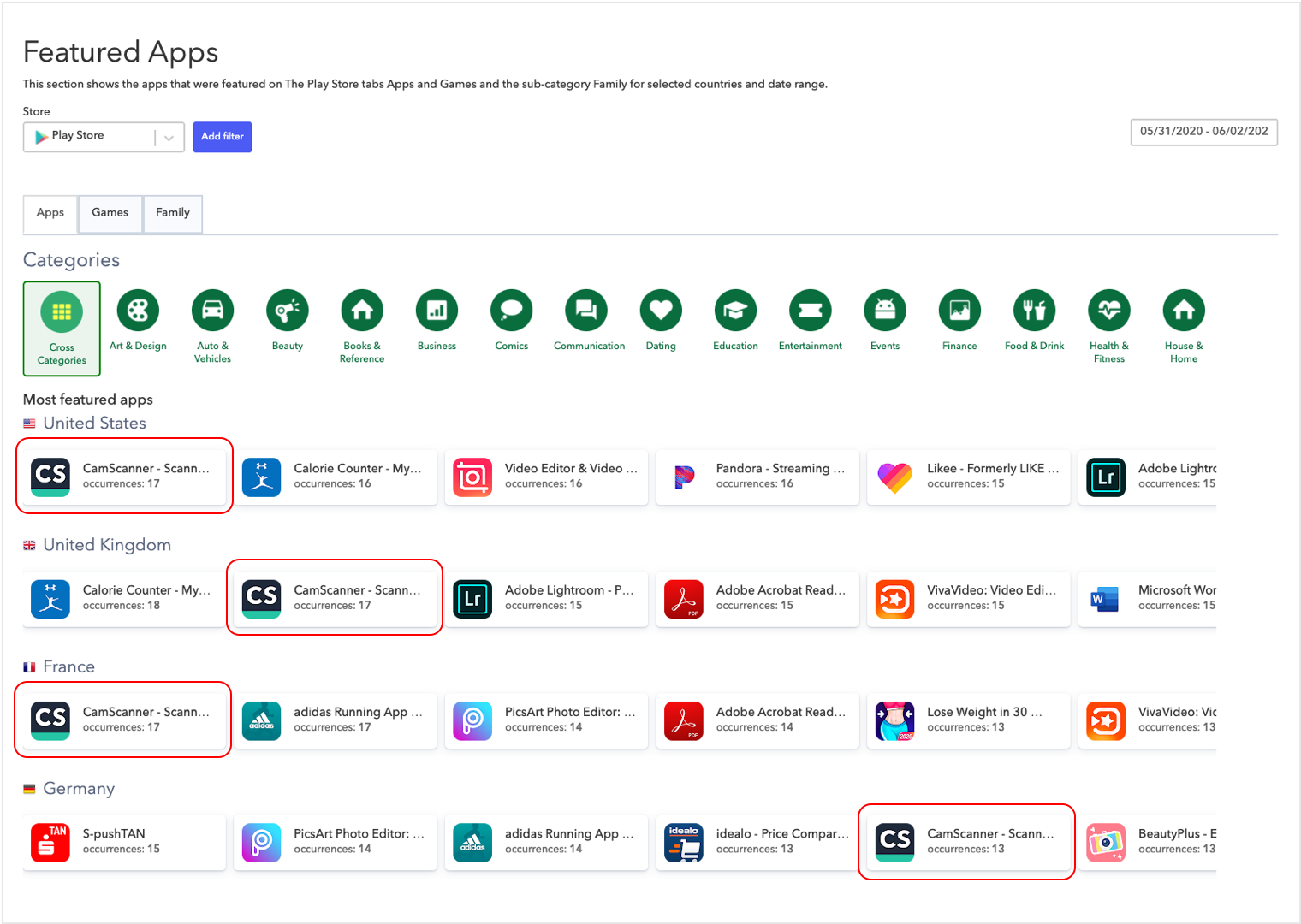 In each country, we rank the apps by the number of featuring occurrences (the number of times an app was featured in the Play Store, independently of the category). In the example above, we notice the app CamScanner was featured most often across the United States, United Kingdom. France and Germany. 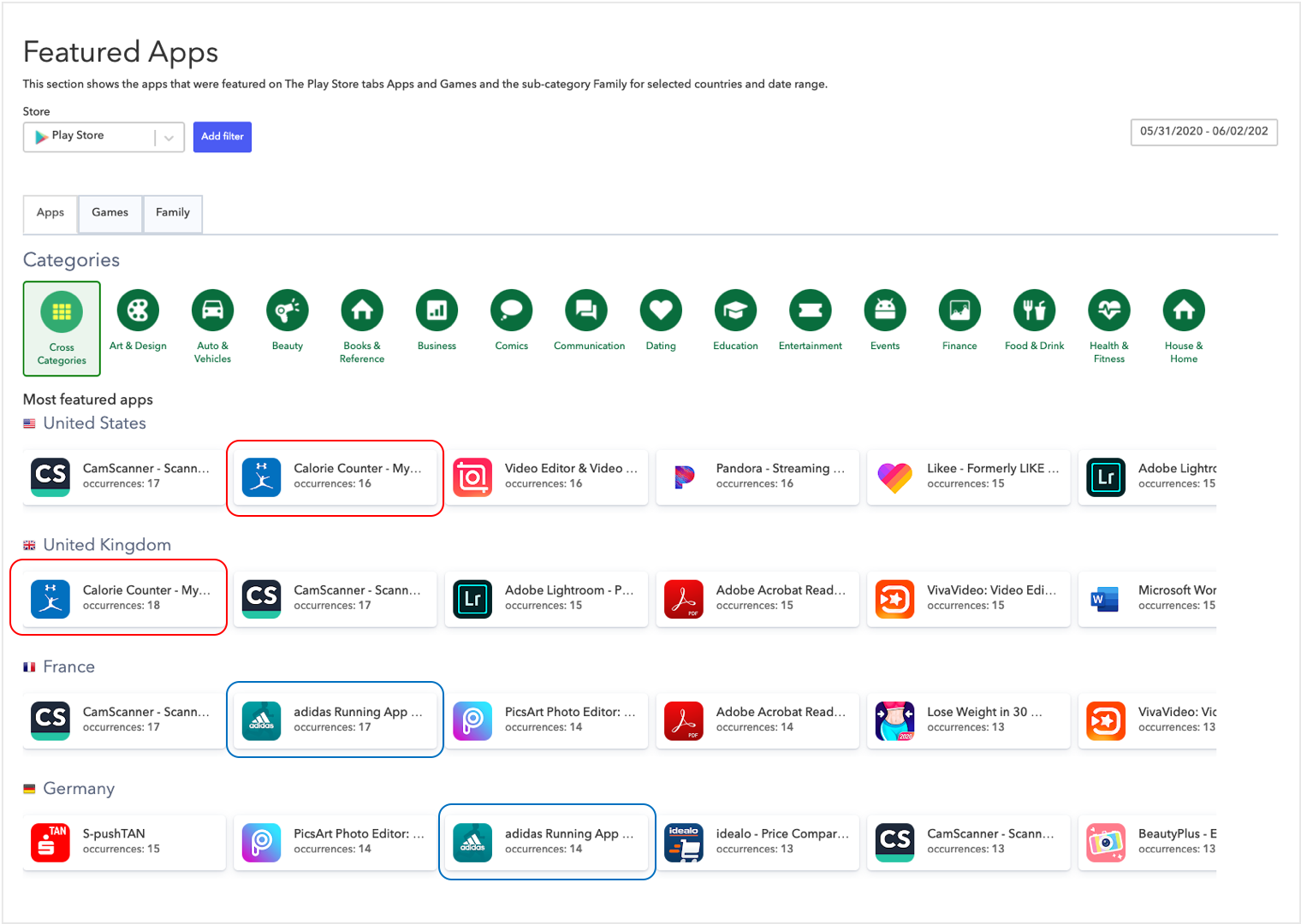 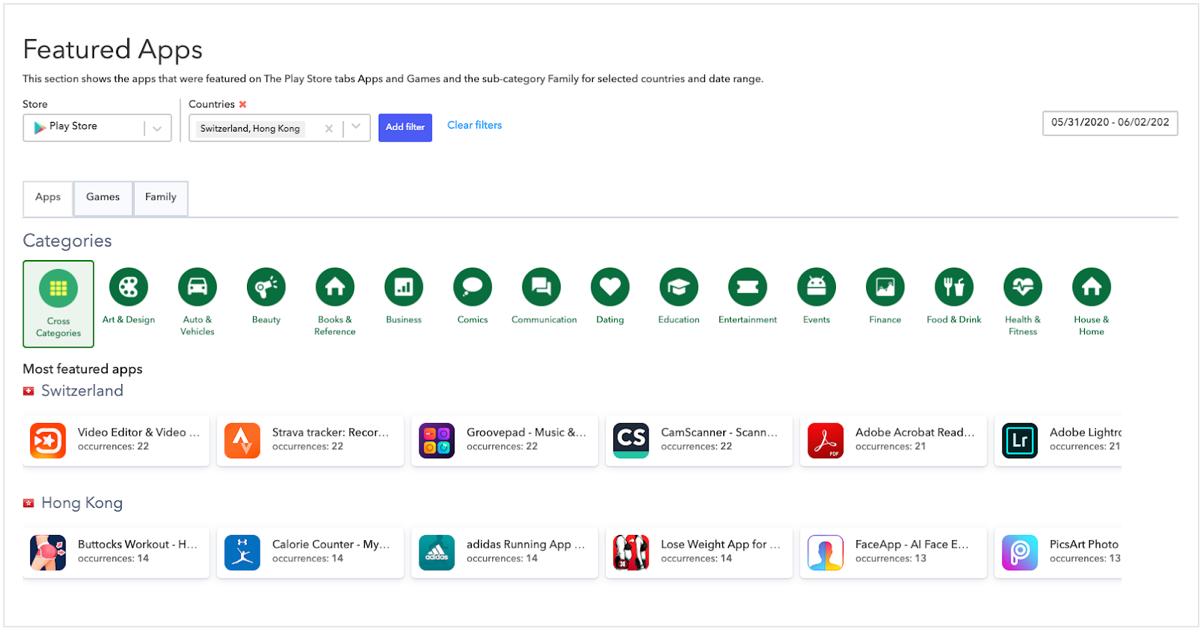 To compare trends between countries other than the default countries, you can choose to add a country filter and add multiple entries. Here, we selected Switzerland and Hong Kong. In Switzerland we see a great variety of apps among the top featured, whereas, in Hong Kong, sports-related apps are predominant.

Review the most featured apps within a specific category

To better understand where your app appears in the Google Play Store you can narrow your research and view featured apps by category. Indeed, an app can be featured in very competitive collections (a collection is a list in which the app is featured) with very powerful apps or, on the other hand, stand out from the crowd.

If you select one country and one category, we will show you the details for this category, with all the featured apps exactly as they appear on a user’s Android device.

Between the 31st of May and the 2nd of June, the app Pandora was featured 24 times in the United States. 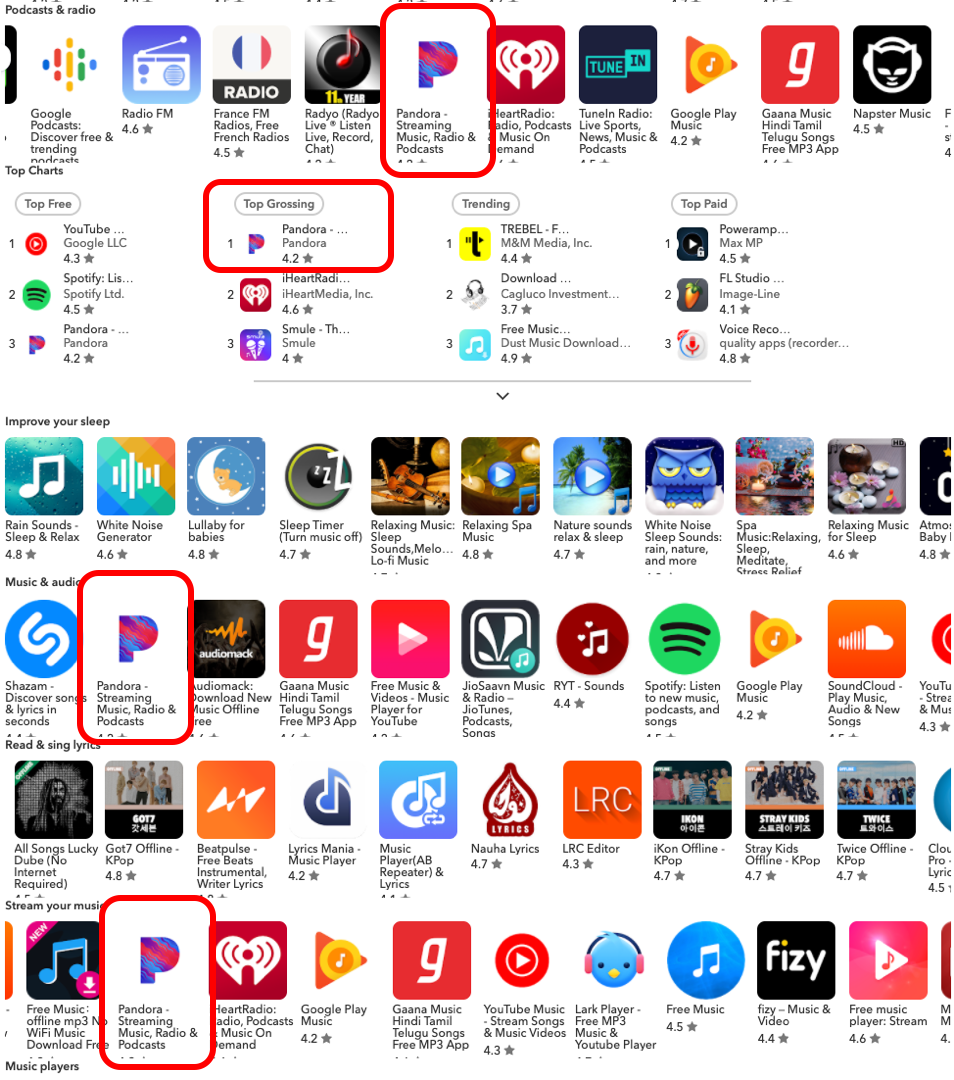 In the details, we see that the app was always featured in very competitive collection such as “Music & Audio” or “Stream your Music” with big competitors such as Gaana Music or Youtube Music.

Find out where your app or a competitor has been featured

You can also decide to see in which countries, collections and categories your app has been featured. It will help you understand where in the store your app is appearing and can help explain movements in Browse Traffic.

Discover how to attribute peaks in the Explore traffic 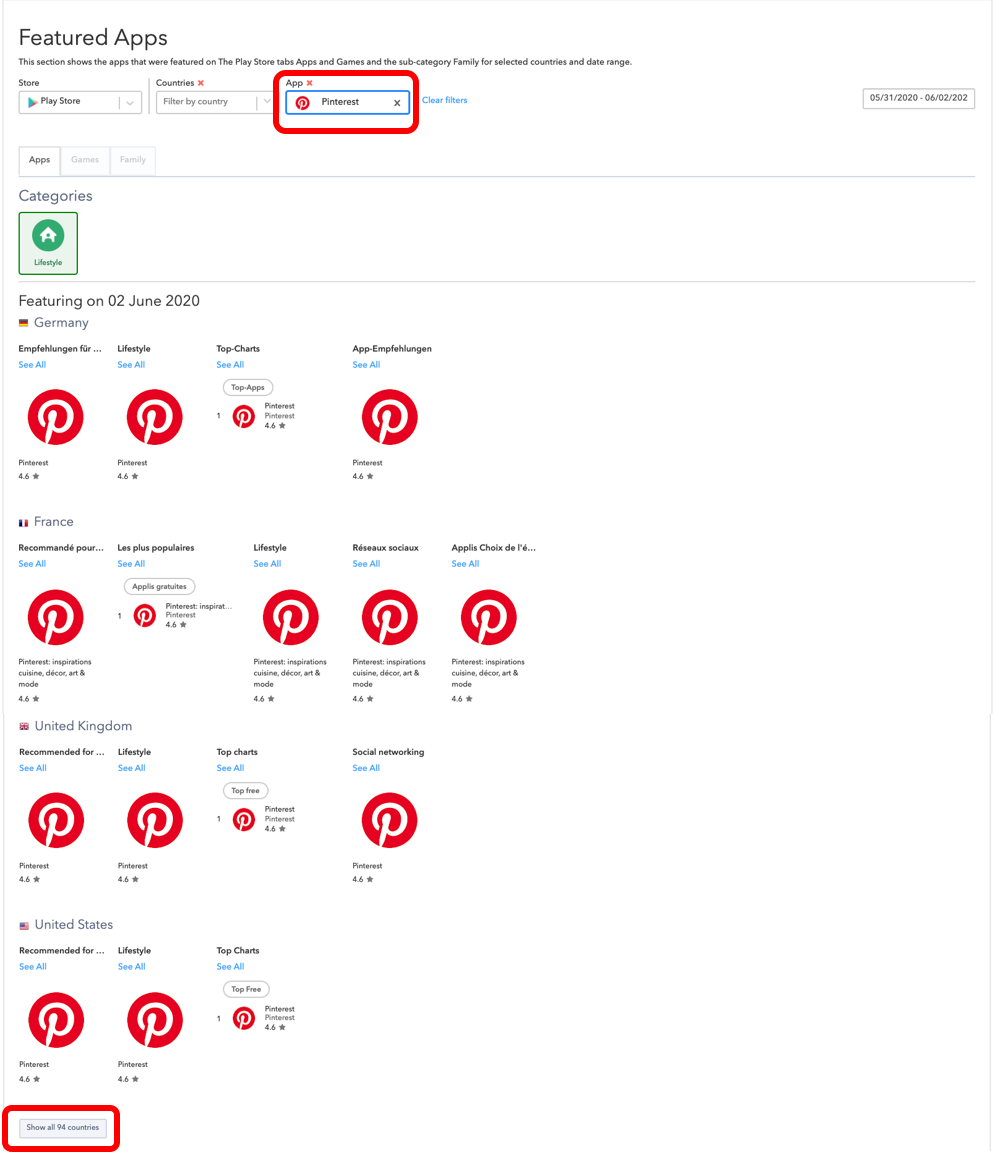 In our example above, Pinterest was featured in a total of 94 countries. As you may have noticed, we will always show, by default, if you were featured in one of these 4 big markets: the US, the UK, France and Germany. But you can also click on the button “Show all” to see all the details for the 94 countries. We further highlight in which list the app appeared for each country.

In addition, you may also want to compare the visibility of an app to another. Indeed, it is hard to get a quick understanding of how well an app has been featured globally. 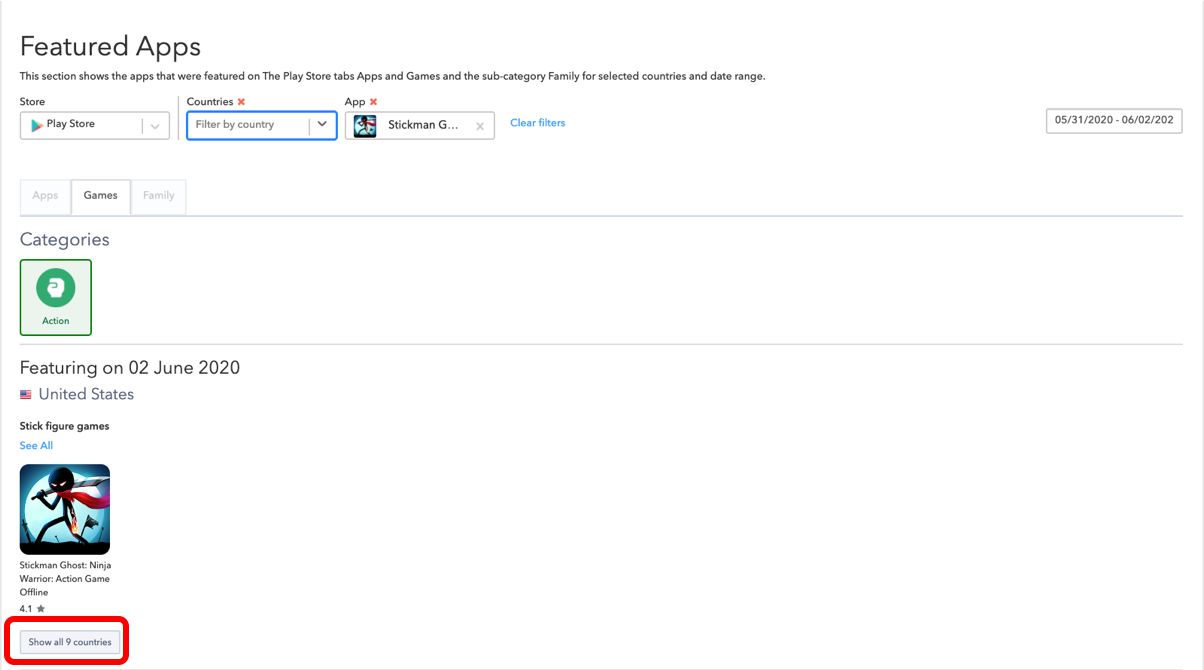 For instance, when we look at the app game Stickman Ghost: Ninja Warrior, we see that the app has been featured in the category “Action” in a total of 9 countries. 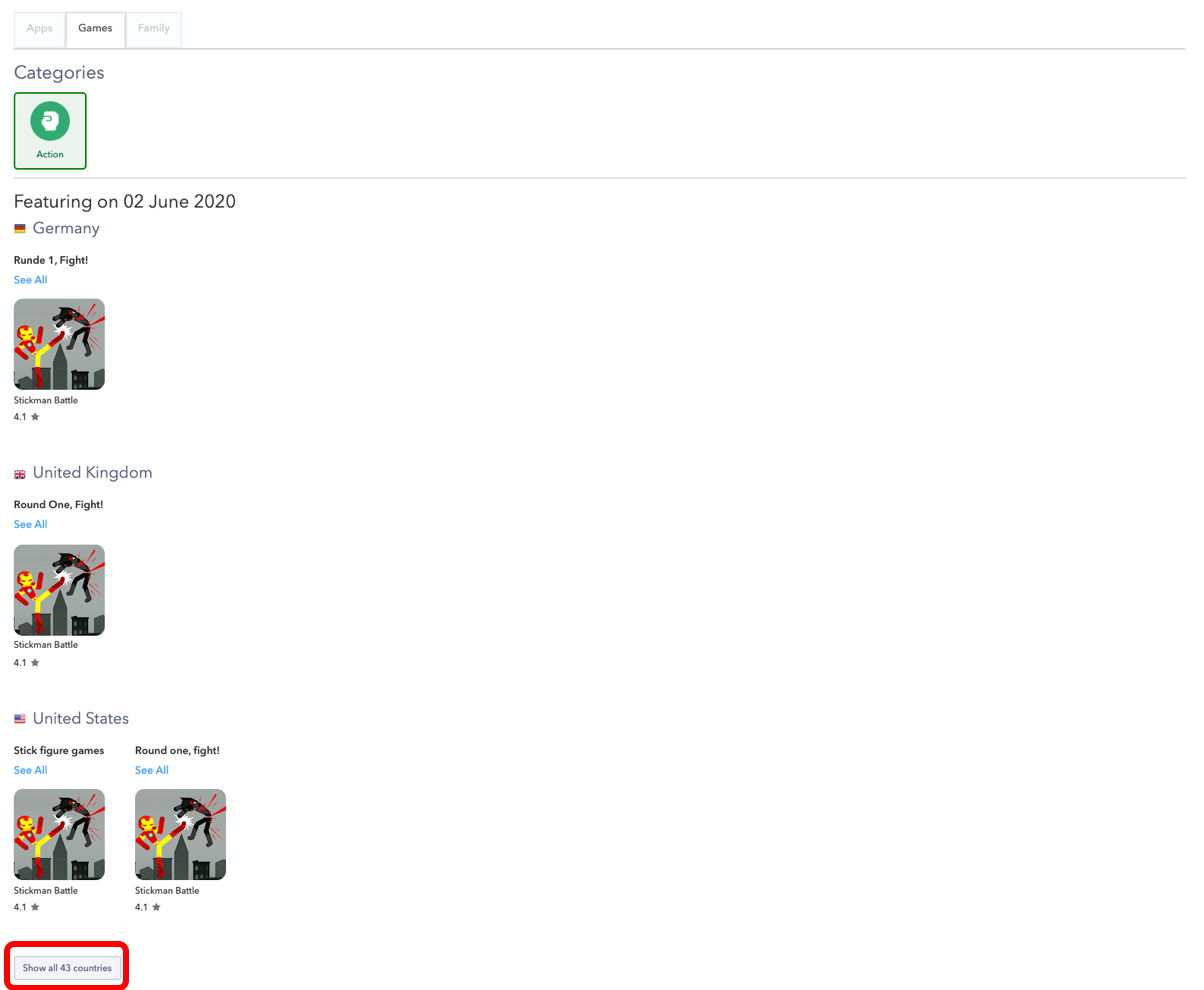 On the other hand, when we look at one of its competitors, Stickman Battle, which was featured in the same category, “Action”, we notice that this app has been featured in a total of 43 countries and not just any country but countries such as the US, the UK, and Germany. As a result, its visibility is way higher than Stickman Ghost. The competitor is clearly ahead in terms of featurings.

Analyze the impact of featurings on browse traffic

Both Google and Apple want to provide the best user experience and have updated their UI to allow for more browse or explore traffic. Just like on the Apple App Store, featurings on the Google Play Store can cause great spikes in traffic from Browse. To make analysis easier we’ve also added this feature to the ‘Browse’ Tab of our ASO tool. Here you can quickly analyze where your app or added competitors got featured in the specific country you are reviewing. 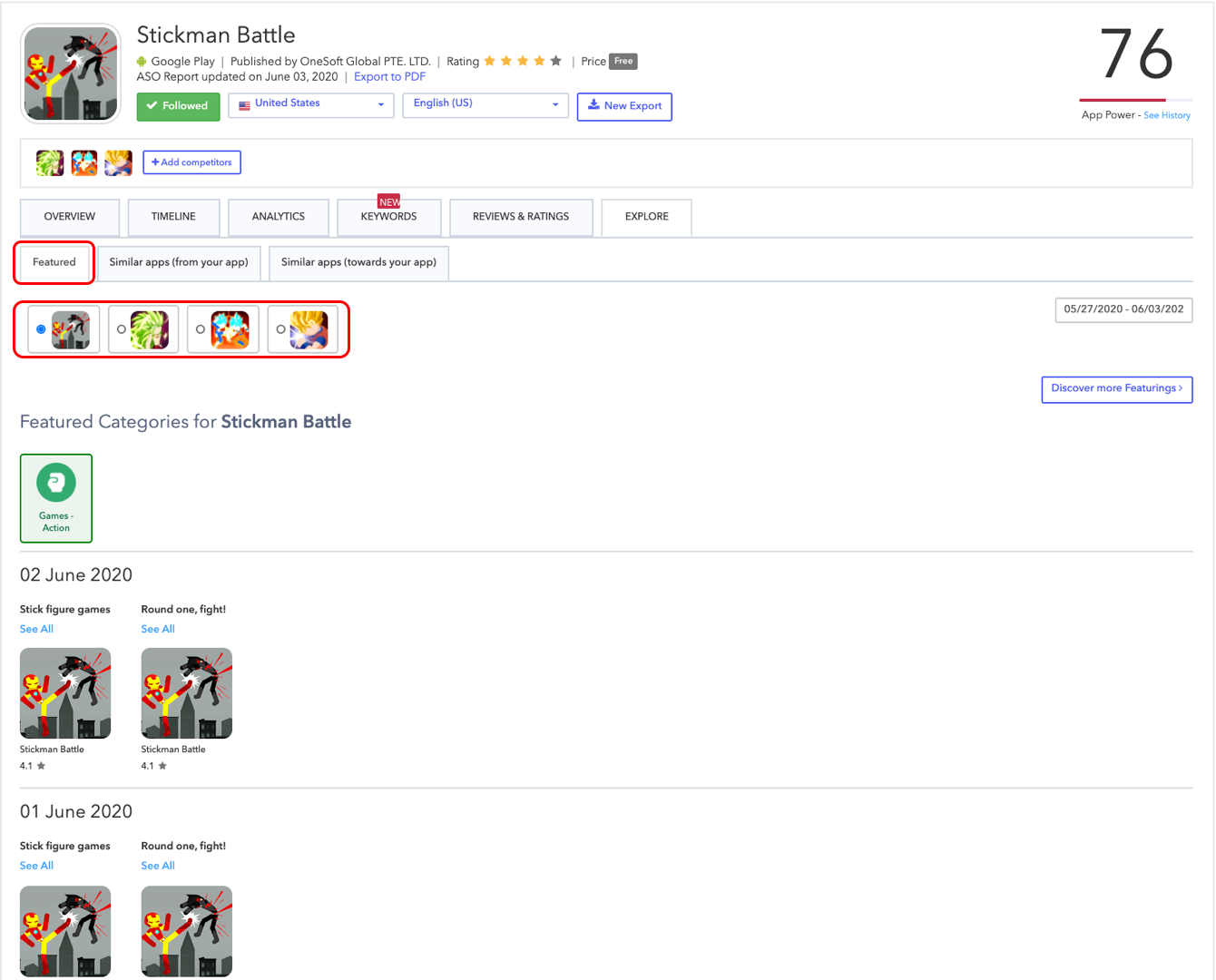 As a result, you won’t need to search for your app or your competitors. You can directly jump from one app to another and compare the results between your peer group.

Discover all the featurings on the Play Store!

In conclusion, thanks to this new addition, you will be able to track your app or your competitors to understand when and where they were featured on the Play Store.

In brief, you will be able to:

Being featured brings a lot of visibility to your app, so don’t forget to keep a close eye on them!