Understand Impact of Being Featured in the App Store 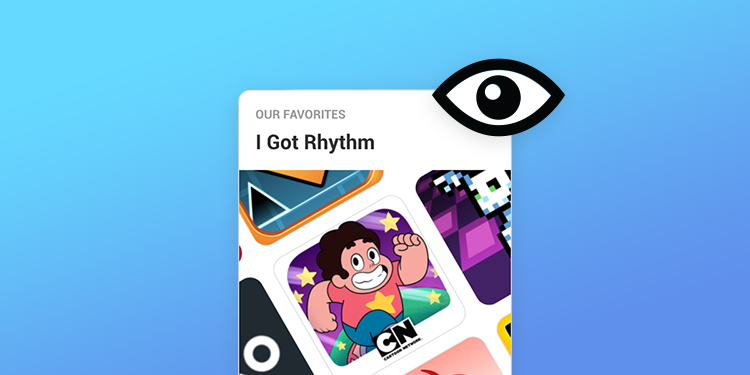 We’re happy to present you to our new indicator: Story views. This KPI measures the visibility of a Story by estimating its total monthly views. Story views can help assess the impact of having your app featured in a particular Story.

How we calculate Story Views

The Story Views indicator estimates the number of impressions a Story has received in the Apple App Store. To compute this number, we take a series of elements into account namely:

1- If the Story was featured in the today tab.
The today tab is tab users see when they open the Apple App Store, therefore it’s a very high traffic tab. Apple has been investing a lot in this tab, providing daily content for its users. When a story is published on the Today tab, it is given a huge visibility potential.

2- The position of the Story in the today tab.
Of course, not all users that open the App Store actually browse through the Stories featured in Today. The higher the position of the Story in Today, the higher its potential visibility. In our calculations, we also consider that users who have spent less than 1 second on Today haven’t even looked at the first Story but probably jumped directly to another tab.

N° views a Story in the Today Tab receives per month in the US Apple App Store depending on its position.

4- The keywords’ volume.
When considering the keywords a Story ranks on, we also have to check the volume of each keyword. If the Story ranks on high volume keywords, it will have much more views than a Story that ranks on keywords that are barely searched.

Discover the most popular keywords of 2019

5- The number of days a Story ranked on a word.
To calculate the total views over the last 30 days, we only consider the days when a Story actually ranked on a keyword. We found that, for certain keywords, Apple always ranks the same Story for several months, but for others, it alternates between several Stories, and some only rank for a couple of days. As a result, not all Stories get the same level of visibility on a keyword.

These two Stories both appeared in 5th position of Today tab of the US Apple App Store (July 8th and July 6th respectively), they also both rank for around 130 keywords. However, the first had 4.9Mio views the last 30 days because it ranks on higher volume keywords and for a longer time, whereas the 2nd had 2.2Mio views since it ranks on lower volume keywords and for a shorter period.

6- The position on keywords.
Just like keyword volume, position of Story on a keyword also impacts the total views of that Story. The lower the Story ranks on a word, the lower its potential views from that word. Finally, since we calculate the Story views over the last 30 days, we also consider the number of days for which the Story was actually ranking on that word. Sometimes Stories only rank for a very short period on a word, while others rank for several months.

AppTweak shows on which days a Story ranked on a keyword and in which position in the Search Results.

Check out the keywords a Story ranks on with position, volume and ranking history.

Another major element that impacts the Story Views indicator is the country in which that Story appeared. Of course, the US App Store drives much more daily traffic than the Belgian App Store. The Story Views estimates the total views a Story received over the last 30 days in a given country. If you app was featured in a story that was published across several countries, you can compare the impact of each country using our Story Views KPI.

How to integrate Story Views in your ASO

So now that you understand the data science behind the numbers, you’re probably wondering how to use this new indicator in your ASO work. As we explain in a previous article, Apple is giving more and more importance to featured content as opposed to usual app rankings. In fact, by adding a Story in the 1st or 2nd position in search results, Apple considerably reduces the visibility of the 2nd app that ranks organically on that word. If you add an Ad banner to the word, then even the 1st organic app result isn’t visible in the first screen. That’s precisely why we decided to revamp our Live Search to reproduce the real user experience of keyword search.

This suggests that, in addition to focusing on getting your app in top results for important keywords, you want to get your app featured in Stories that rank for those keywords too. For example, we looked at two Real Estate apps Realtor and Zillow and did a Live Search on their brand names. When we searched the word “zillow”, we found the app in first position and a Story that features that app (and that app only) in 2nd position.

When we searched for “realtor” we found the app in first position, but in 2nd position there was a Story that featured several competitor app. This is something you really want to avoid.

Don’t let Apple is give visibility to competitor apps on your branded terms. Make sure you app gets featured in as many Stories as possible (ideally alone) especially in those that rank on relevant keywords for your app.

That said, the Story Views indicator will help you assess the visibility a Story your app is featured in (or a competitor) is getting. You’ll be able to compare Stories and identify those that have a high potential of leading extra traffic to your app.

5 tips to easily measure the ASO performance of your app

Stories as source of impressions

As mentioned above, it’s important to understand that Stories lead to extra impressions for your app, however, some Stories give an impression to your app without users having to click on them, whereas others only give your app an impression once the user has opened the story and viewed its content.

We hope this article has enlightened you on the impact that a featuring can have on your app and how to benefit from it. You can start measuring the visibility your app is getting from Stories right now in AppTweak. The Story Views indicator is visible in all features that highlight Stories, including Featured Apps, the Featured Tab and the Live Search. Have fun!