The keyword tool is by far one of our core AppTweak features, therefore, we’re constantly working on little (or big) improvements. Here’s a quick recap of our latest changes. We hope they will make your keyword research and ASO routine easier!

Growth indicator is back!

The growth indicator shows how your app’s rank has progressed on a specific keyword since yesterday. The Growth column can help you rapidly identify keywords that perform well vs. keywords on which your app is losing visibility and might be worth replacing.

In the example below, we looked at LinkedIn’s top rank growth keywords on a list of 100 keywords related to the app. We then checked out the app’s worst growing keywords.

Looking for keywords? I used the Brainstorm list to rapidly populate my keyword list with relevant words

LinkedIn’s top keywords with the highest ranking progression since yesterday.

LinkedIn’s top keywords with the worst ranking progression since yesterday.

It’s interesting to see that LinkedIn gained significant positions on the keyword “actor”, but is that word really relevant for the app? Why such an increase? Is LinkedIn targetting actors who might be looking for new job opportunities during this pandemic?

The app has also been gaining positions on good volume keywords related to job areas.

On the other hand, the app is losing ground on a series of other keywords. Typically, it gained positions on keywords containing the keyword “teens” but lost ranks on the keyword “teen job finder”. It seems that the plural version of the word “teen” works better for the app.

However, keep in mind that this indicator only takes into account your app’s current rank vs. its rank yesterday. Before making any hasty decisions, make sure to check the full ranking history of your app on the keyword. Is this progressive change over several days? Or is it just another jump that reflects the instability of your app on the word.

To illustrate, we took the ranking history of three keywords. As you can see LinkedIn has just recently started to rank on the word “recruiter”. After a couple of weeks of stable rank, the app has gradually managed to push itself up to the top 10.

On the keyword “applications” however, the app’s rank jumped beginning of August but has been declining since.

Finally, on “sales navigator” the app has been going from ranking n°5 to unranked. This shows that the Apple algorithm hasn’t yet figured out how to rank LinkedIn on this keyword. This behavior is frequently seen on other app’s names (LinkedIn has another app named LinkedIn Sales Navigator).

Comparing the keyword ranking history of LinkedIn on three keywords

Tips on how to measure your app’s ASO performance

We hope this extra KPI will help you better understand how the algorithm works and pinpoint high potential keywords while replacing low-performing ones.

We’ve added another new KPI called Installs %. This metrics gives the percentage of total installs a keyword generates that we estimate go to your app. In other words, out of all the installs that a given keyword drives across all apps that rank on it, what percentage of installs is attributed to your app.

This KPI is actually a combination of the KPIs “All Installs” - the estimated organic installs this keyword generates across all apps that rank on it over the last 30 days - and “Installs” - the estimated organic installs that the keyword drives to your app over the last 30 days. So, Installs % is basically Installs/All Installs.

Yet having this metric as a KPI directly in the keyword analysis will help you immediately gauge the level of traffic your app is capturing on a keyword.

For example, I added a series of keywords related to the app DoorDash. In just a click, I can see for which keywords the app captures the majority of the traffic. The keywords tend to be either generic or very close to the DoorDash brand.

Keywords for which DoorDash captures the majority of the organic traffic.

However, if I sort by the keywords who drive the most installs to the app, the results are totally different. Competitor names appear in the top results. These brands tend to have a much higher traffic volume, so, even if my app only captures a small chunk of those installs, it can be a significant amount!

Keywords driving the most organic installs to DoorDash.

Learn more about our “Installs” metric

At this point you might be thinking, wow, that’s a lot of KPIs to look at. We all have our preferences as to which metrics we want to base our analysis on. In AppTweak, you can now customize your table view to focus only on the metrics you’re really interested in.

If you’d like to add more KPIs to this view, just send us an email!

That’s it for the major changes, but if you look closely, you might find more! Here’s a bonus: we’ve added a filter by rank in the All Ranked Keywords of our Keyword Research section. You can rapidly browse through all the keywords that your app (or a competitor) ranks on and filter them by the keywords they contain, volume and, rank!

New filter by Rank in Keyword Research > Ranked Keywords > All

We hope these little changes will make your ASO routine simpler. Feel free to reach out if you have any suggestions on how to make the keyword tool even better. We’re always avid for feedback!

iOS 14: What’s new and how will it impact ASO 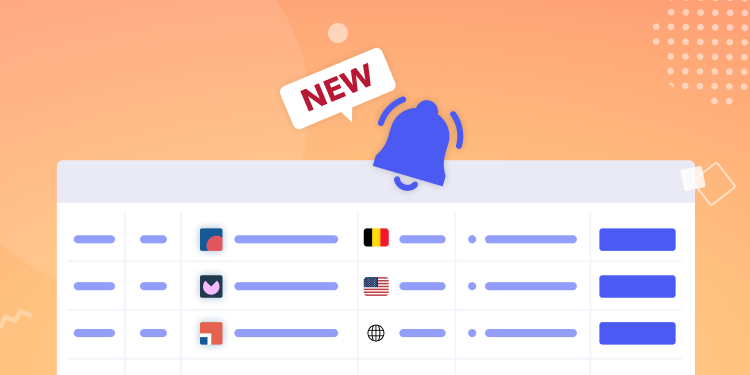 Get alerts for every major update in the app stores