Why is ASO Important & What is the Impact 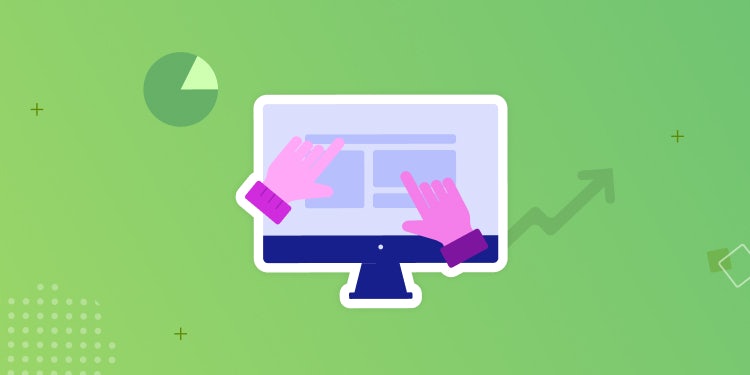 Annual worldwide app downloads have grown 45% in the last 3 years to a record of 204 billion, according to App Annie. In-app and subscription spending in both gaming and non-gaming topped $120 billion worldwide and grew 105% in the last 3 years in the US alone. Consumers spend 3.7 hours a day on mobiles, up 35% from 2 years ago. The trends are clear; today, businesses have to think mobile-first. App Store Optimization is an important part of the mobile growth stack and if you are not investing in ASO you’re missing out on the largest discovery channel available to your app!

ASO, or App Store Optimization, is the process of improving an app’s visibility in the app stores with the objective of increasing organic app downloads. Apps are more visible when they rank highly on a wide variety of search terms, or get featured on the store.

Why is ASO Important?

65% of all apps are discovered through app store searches

Nearly 65% of all apps are discovered through app store searches. That means that, if you’re not using ASO to increase your app’s keyword rankings, you are missing out on the largest discovery channel available to your app! 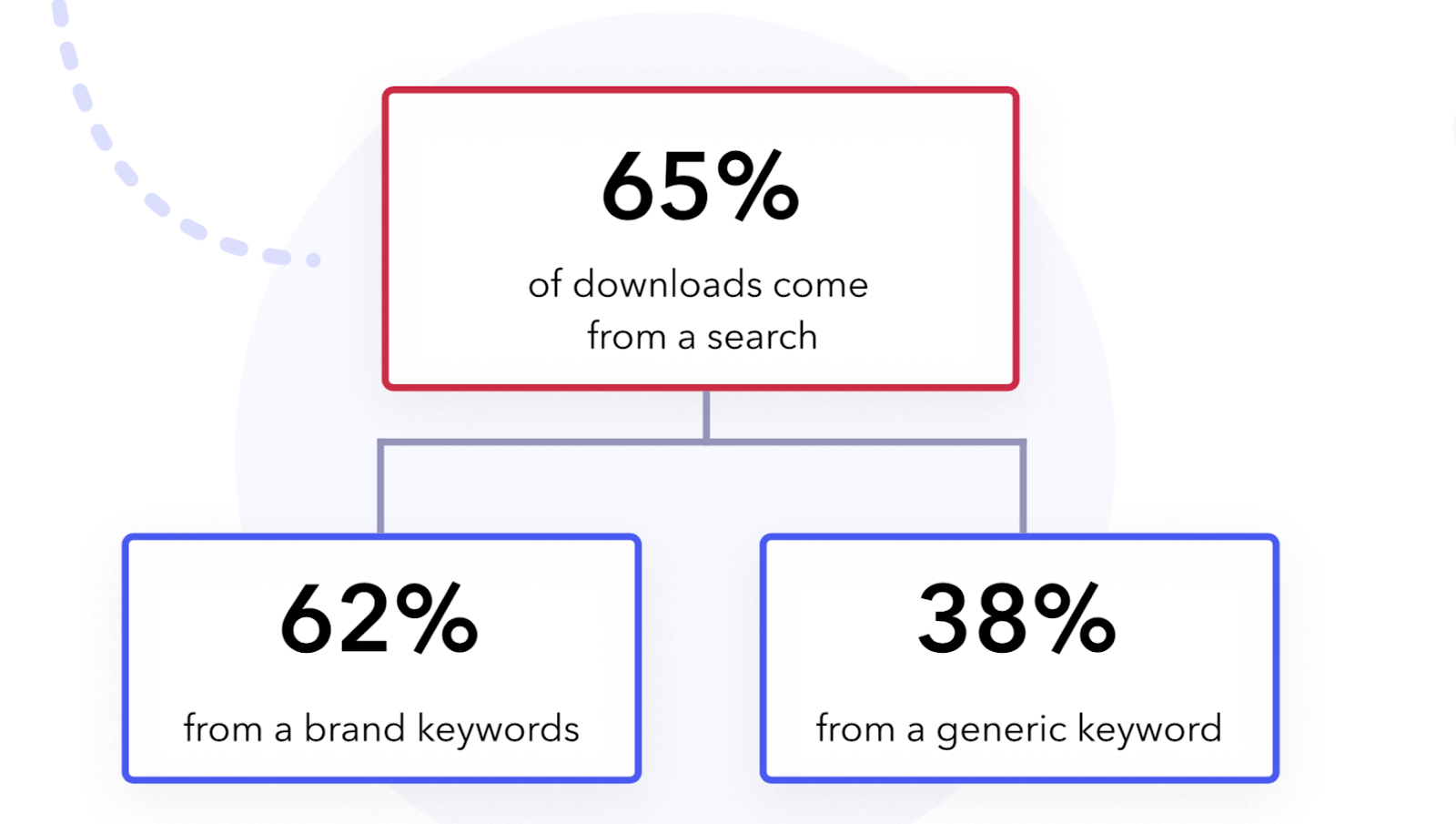 The division between downloads from branded vs generic keywords varies strongly from app to app. Famous brands like Uber receive almost 90% of downloads from branded keywords or misspellings. But other apps like Daily Yoga, Colorify and Elevate Brain Training receive up to 76% of downloads from a generic keyword. It’s crucial for these apps to understand app store search behavior, choose keywords with the highest volume to maximize visibility and optimize creatives to convert app store visitors into users.

An optimized app listing will lead to lower CPIs

All users go through your app page at some point. Whether users land on your app page via search ads, native ads or social media ads, your app page plays a major role in convincing these users to download your app. It is crucial all app page assets are aligned with your marketing efforts and, at the same time, optimize conversion rate. A higher conversion rate will ultimately lead to lower CPIs.

To get featured in the app stores, you need to have a solid ASO strategy

Most marketers and publishers dream to have their app featured, but with more than 2 million apps in the app store, the opportunity comes to very few. A solid ASO strategy is necessary to increase your chances of getting noticed by app store editors! This includes:

Learn how to create an effective ASO strategy

To ensure your ASO strategy stays effective, relevant and up to date, you should also pay close attention to today’s most significant ASO trends.

Your peers are doing it; don’t get left behind

Need some stats to convince your team to invest in ASO? Have a look at the following examples highlighting the impact of title updates, icon A/B tests and screenshot revamps on organic downloads.

52% increase in visibility after title update

CSR 2, a racing game, updated its title in the Google Play store from ‘CSR Racing 2 - #1 in Racing Games’ to ‘CSR Racing 2 - #1 in Car Racing Games’ (they added the keyword ‘car’). As a result, the game gained many rankings on long-tail keywords with ‘car’. For example, rankings for ‘car racing games’ increased from 8 to 1! In total, the visibility of the app on long-tail combinations with ‘car’ increased 52% after the title update.

Visibility Score for CSR 2 in the Google Play Store after title update.

+300 daily installs in France when updating screenshots for seasonality

When updating its screenshots in December as part of a broader holiday campaign, Deezer saw an increase in daily downloads of more than 300 for two weeks straight. For the campaign, they worked with French artists to create covers of famous Christmas songs to create the ultimate Holiday playlist, ‘Le Grand Noel’. App Store creatives were updated to reflect this campaign and increase conversion rate. 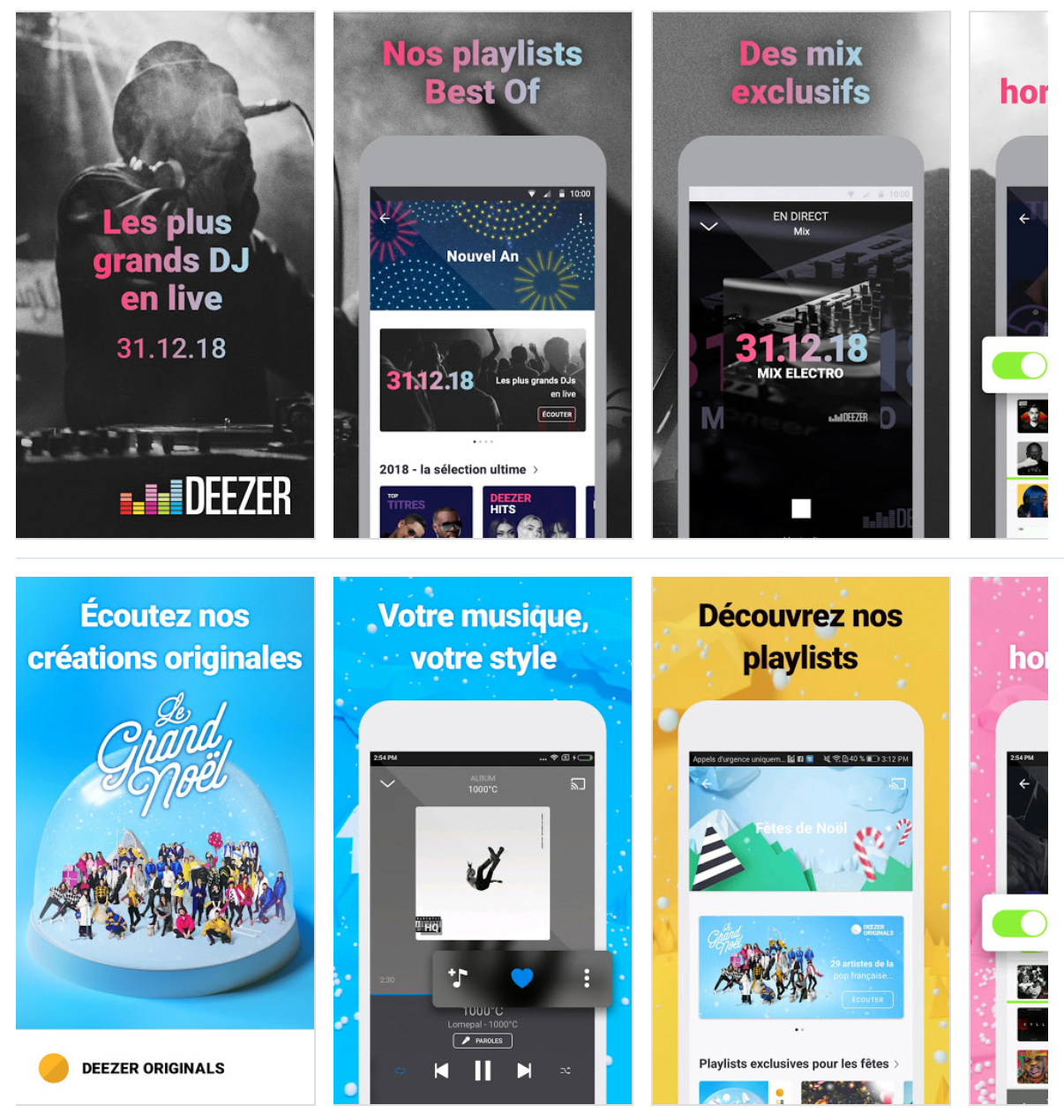 Screenshot update from the Deezer app in the Apple App Store in France during the 2019 holiday season.

In short, if you are not investing in ASO, you are ignoring a crucial part of the mobile growth stack. Not only are app store searches the main way users discover new apps, an optimized app listing will ultimately increase your UA performance and increase app store browse traffic.

Why is ASO important?

AppTweak is the best ASO tool to help you get started! Our main features include:

Get started today with an 7-day free trial!

by Alexandra De Clerck ,  Head of Marketing at AppTweak

Alexandra De Clerck is Head of Marketing at AppTweak. She has helped many companies increase their online web presence and is now here to help you boost your app downloads.