At the recent App Promotion Summit, London, which took place virtually due to Covid-19, AppTweak’s Chief Product Officer Marie-Laure Cruyt presented practical examples and case studies to demystify ASO on Google Play. To see the full talk, use this link or continue to read below to unearth the 5 tips to build a successful ASO strategy on Google Play.

1. Keyword Density has an Impact on Rankings

It is recommended that the long description consist of high-priority keywords with the most important having the highest density of around 3%. Having a higher density than 3% should be avoided, as it can be considered keyword stuffing. 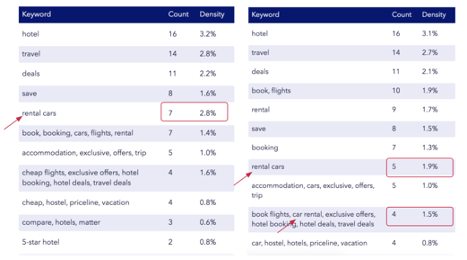 To assess if this had an impact on the visibility of Priceline for these keywords, we built a keyword list on AppTweak consisting of 30 keywords with “car rental” or “rental cars,” and used the Keyword Monitoring tool for a visual of Priceline’s visibility.

We can see there was a large jump in visibility for Priceline immediately following this update, suggesting that Priceline improved in rankings for many keywords in this list or the keywords with the highest volume. When looking at the specific keyword movements, we can see that the only keywords to lose visibility were those that were reduced in the long description.

This demonstrates that keyword density does have an impact on an app’s keyword rankings. It is important to remember that it is impossible to have a high density for many keywords, so it must be done strategically. Make sure to focus on the highest priority, but understand it can take a few tries to get it right. If Google doesn’t pick your app to rank high on a keyword, try making an update that focuses on a slightly less competitive option, measure the results, and keep trying until you find high-performing keywords.

Keywords are not the only way to share the right messaging on Google Play. Creatives must also align and reinforce the message of your app’s purpose.

When WedMeGood, an Indian wedding planning app, lost its number 1 app for “wedding planner” and “wedding planning” to an American app MyWed, they asked us how they could regain the number 1 position. As we just mentioned, a good place to start is looking at the keyword density for both apps.

Both apps are targeting the same keywords in their title and short description. WedMeGood also has a higher density for both “wedding planner” and “wedding planning,” and although it does help rankings, unfortunately, keyword density is not the only factor. There are many elements that can influence which apps rank better on the same keywords, including conversion and retention, and a major element that impacts conversion is an app’s screenshots.

As we can see in the following example, both apps use a similar design, but there are still major differences in what each app is showcasing. MyWed is highlighting four key features in its screenshots, a wedding day countdown, task tracker, budget monitor, and guest list manager. These are four valuable features when searching for a wedding planner app. Messaging on the screenshots for WedMeGood, on the other hand, is more general.

Highlighting in this manner can make a difference in terms of conversion, and this goes for any app. It is important to identify the features that potential users are most interested in, have clear messaging, and even test the order in which they appear.

While we are at it, here are a few reminders when selecting your screenshots for Google Play:

It’s commonly believed that video catches the user’s attention and increases conversion, even more so now that both Apple and Google autoplay the videos. However, this is not always the case. Videos can be distracting to users, or the video may not clearly project the right messaging. It’s important, as with all things in ASO, that you test if your video is actually improving conversion for your app. After conducting a small search, we found a few apps that A/B tested video versus those who had no video and decided on going with no video. We can assume that the video did not win the A/B test because conversion with it was lower or did not improve.

Here we see that Expedia ran a short A/B test in January testing video versus no video and ended up going with no video. 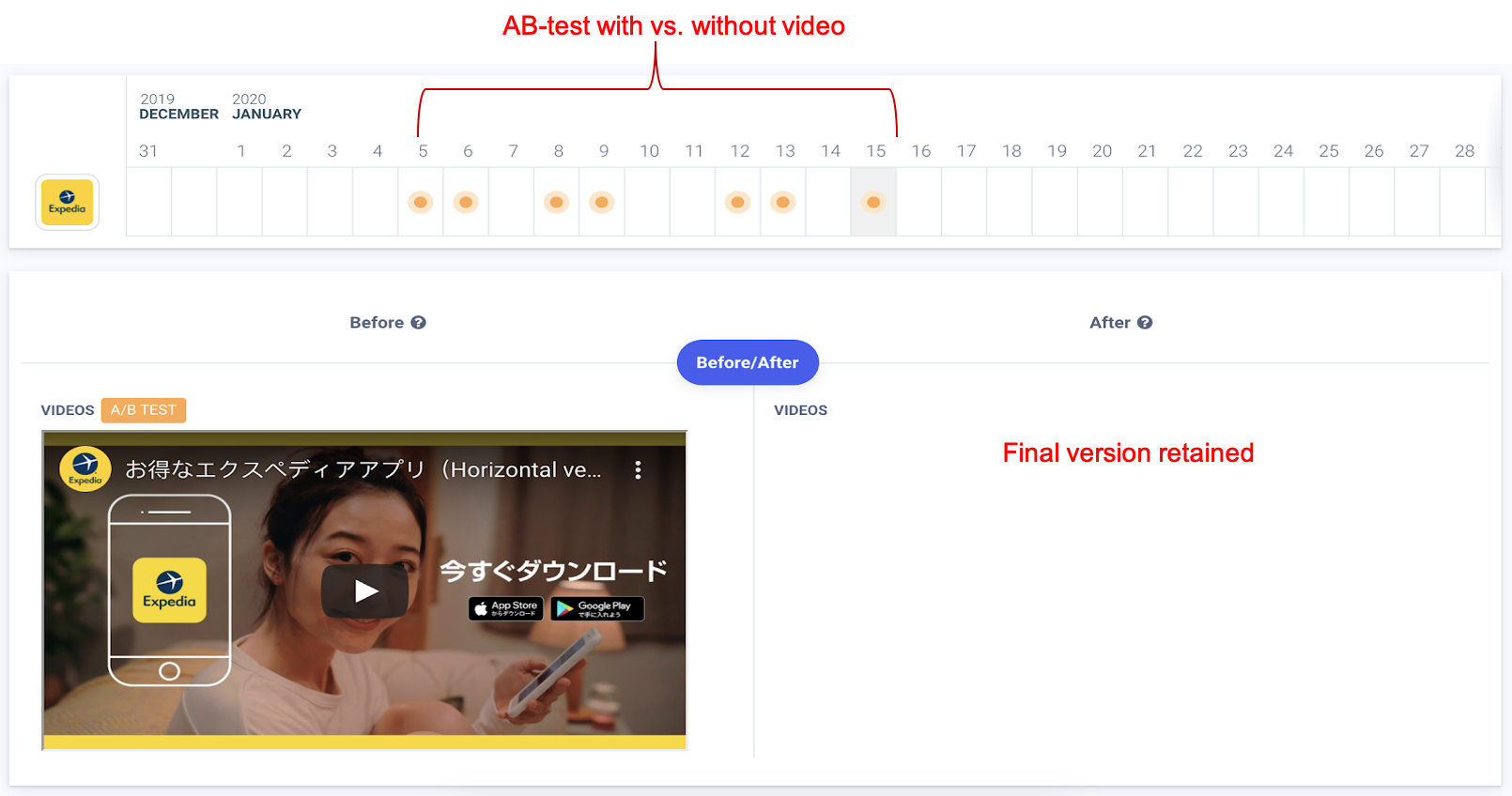 Same goes for the app Headway, which summarizes books for users in 15 minutes. They A/B tested video versus no video in February and also ended up with no video. 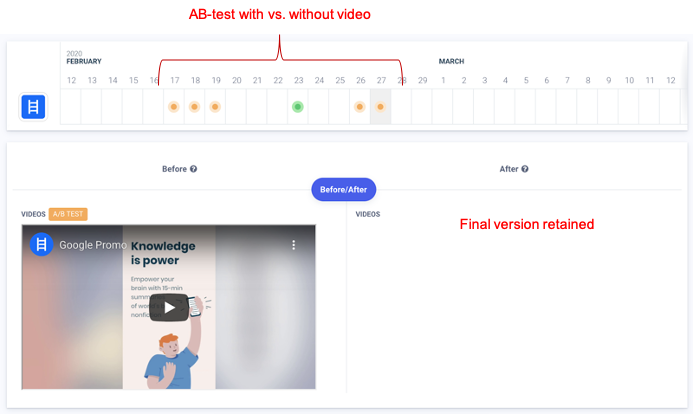 These examples and others demonstrate that video does not always increase conversion. In fact, we found that among the apps that ran an A/B Test with versus without a video in 2020 in the US, 5 out 10 kept the version with video, and 5 out 10 without. So, make sure to check what works for your app. Always look at your competitors, as you can learn a lot from them.

4. Retention is the Most Determinant Factor

Recently, an AppTweak user (who does not wish to be identified) experienced a huge spike in overall keyword rankings and a significant increase in category rankings. This was obviously a good thing, but they were curious where this increase was coming from. They are active in ASO, but they had not made any updates in the reasonable time prior to this spike.

They discovered that they had experienced a high uninstall and reinstall rate on what we will call “day D.” Because of a bug, 300 users uninstalled and immediately reinstalled the app as they were loyal users. The retention rate following day D reached up to 95%, causing rankings on high-volume and competitive keywords to improve.

During the 30 days following this event, rankings on high-volume keywords and other big sports brands such as Fancode, ESPN, and WWE improved.

The same thing also happened for the category ranking. Prior to day D, the app ranked around the 120th position in the Sports category. During the 30 days, with high retention, its category ranking increased to a peak position at number 7 before gradually coming down again.

Today, they have resumed their normal Sports category rankings, but they mentioned that they have never seen such an immediate and strong impact on rankings. We have learned that retention has a high impact on rankings in Google, and the overall retention is also taken into account for both keyword and category rank. When selecting your keywords, make sure to keep those with a high retention, as Google measures the retention at a keyword level.

5. Impact of Tags on Similar Apps

Lately, an AppTweak client made an update to one of their tags, and immediately there was an impact. The next day, the list of similar apps suggested by Google in the app page had changed. 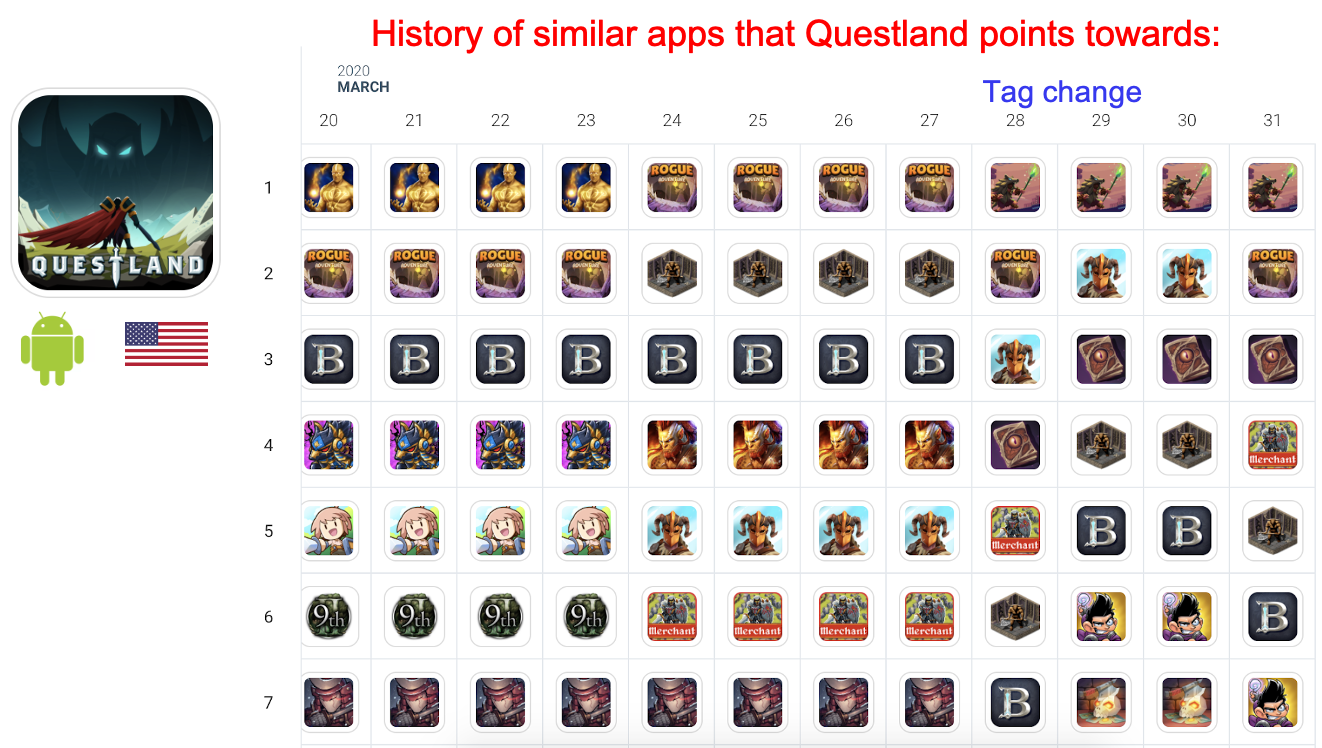 When we look at similar apps that refer to Questland, we can see there was also an immediate impact. 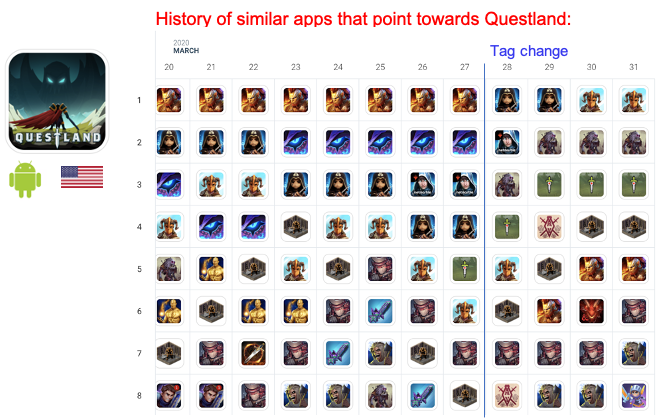 Unfortunately, outside of the tags you select, there is little that you can control. There is no way to know which apps will be pointing towards your app or to others until after the tag is added. It is still interesting and important to monitor the changes, since they have a direct impact on the explore traffic for your app. When we look at the impact these changes had on views from similar apps, we can see the Questland had been experiencing a spike in views and, following the change in tags, the spike ended.

Tags have a direct influence on similar apps that point towards your app and the apps you point towards. Whether you make changes or not, it is important to monitor this extra source of visibility, as your competitors may update their tags

Like we saw, there are many factors that play an important role in keyword rankings; hopefully many that you are already tracking and measuring. Perhaps, some or all of these 5 factors may not have been on your radar, but you can now consider these aspects when looking for new areas to improve conversion for your app. 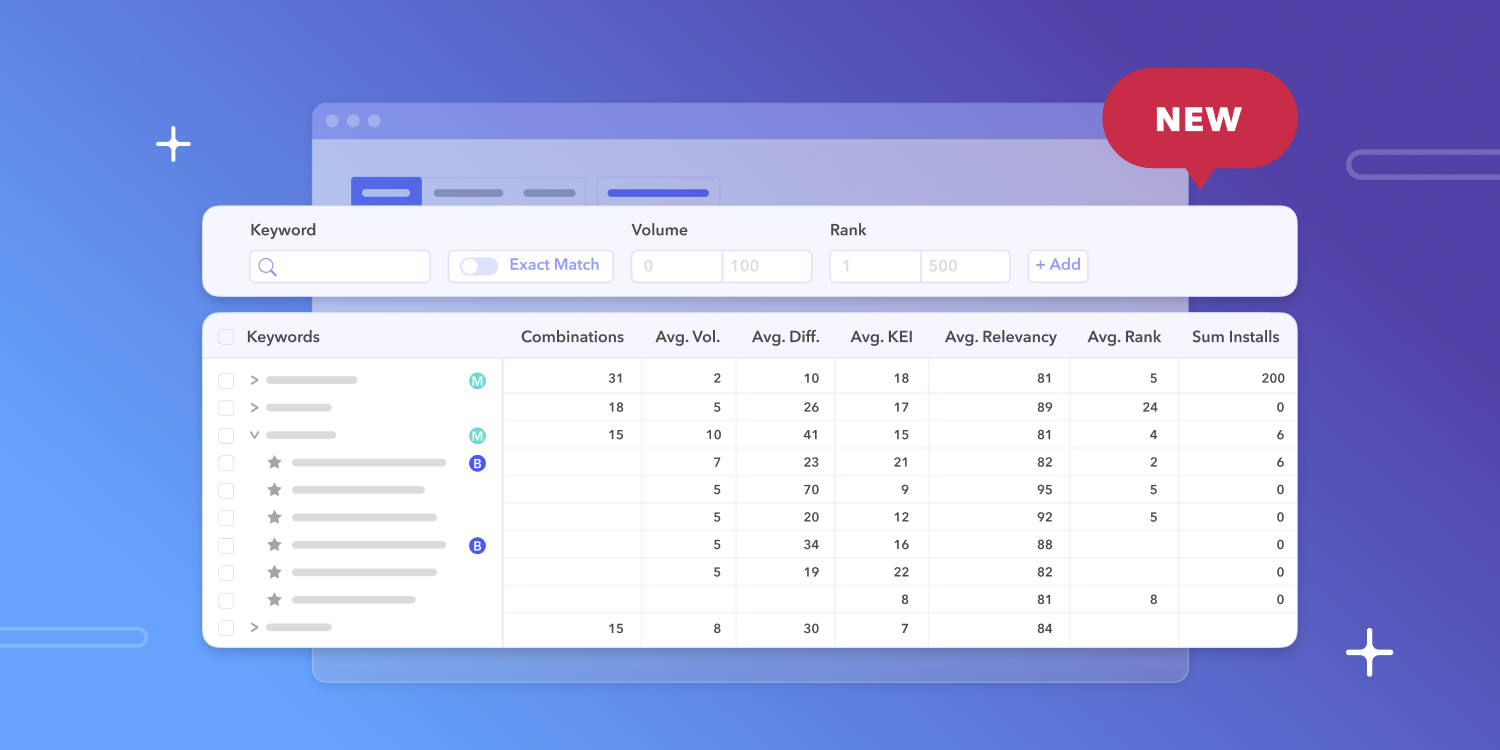