Apple's iOS 15 Reveal: What Will Change for ASO 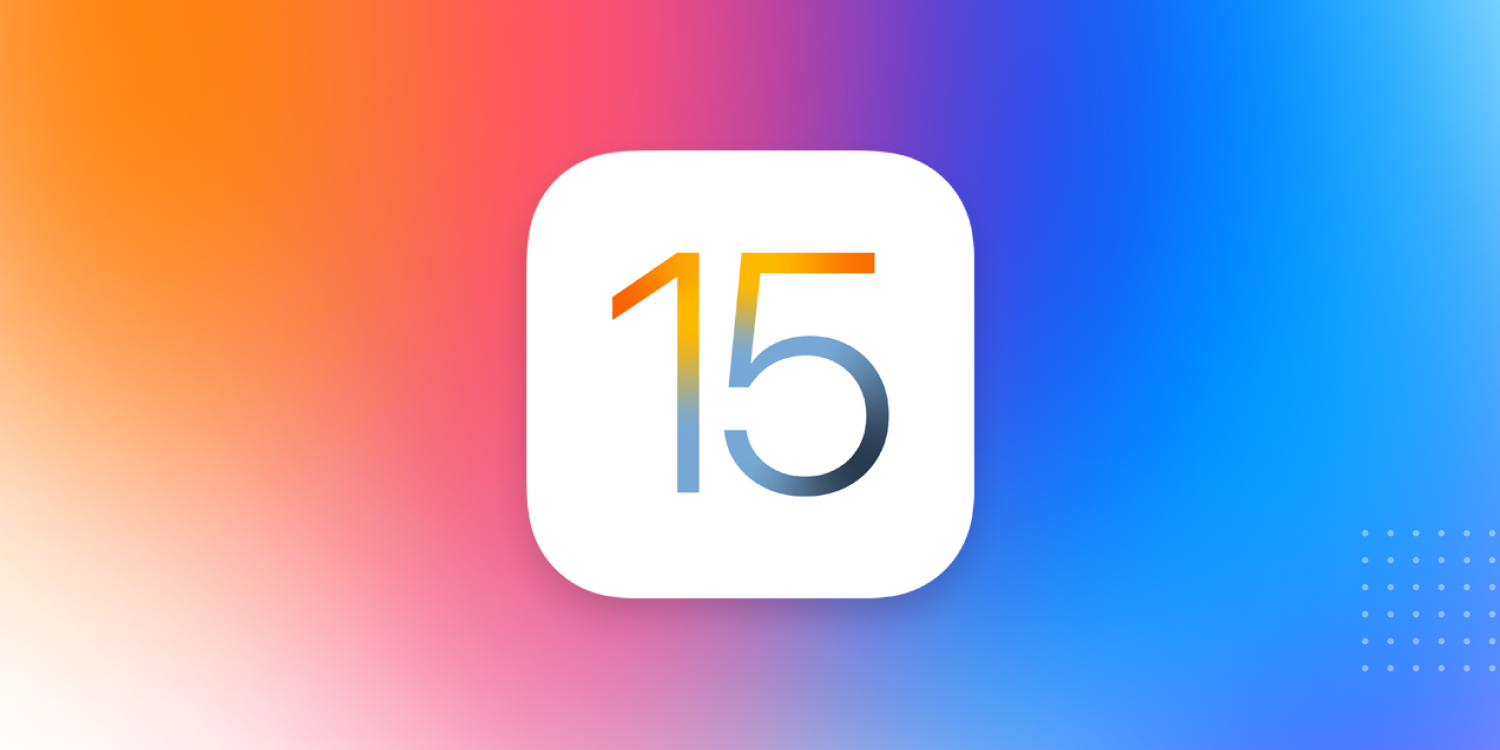 Earlier this week, Apple hosted their annual World Wide Developer Conference and unveiled a large list of changes coming to Apple products later this year, including numerous software changes that will be released with iOS 15. While iOS 12, 13, and 14 were mostly believed to introduce relatively limited changes for ASO, iOS 15 seems to be the most important release since iOS 11 for app marketers focusing on organic user acquisition.

While improving the App Store consumer experience has been Apple’s main focus in recent years, many developers and marketers (including our own team at AppTweak) have repeatedly remarked that Google Play offers specific functionalities that better fit their needs, despite not being perfect. It seems these demands are now being answered by Apple: this week’s announcement offered developers the possibility to A/B test their creatives from within the App Store, set up custom listings for multiple user cohorts, and promote in-app events on their product page and across the store. In this article, we’ll be letting you know exactly what was announced, how it differs from Google Play, and what is still unknown. 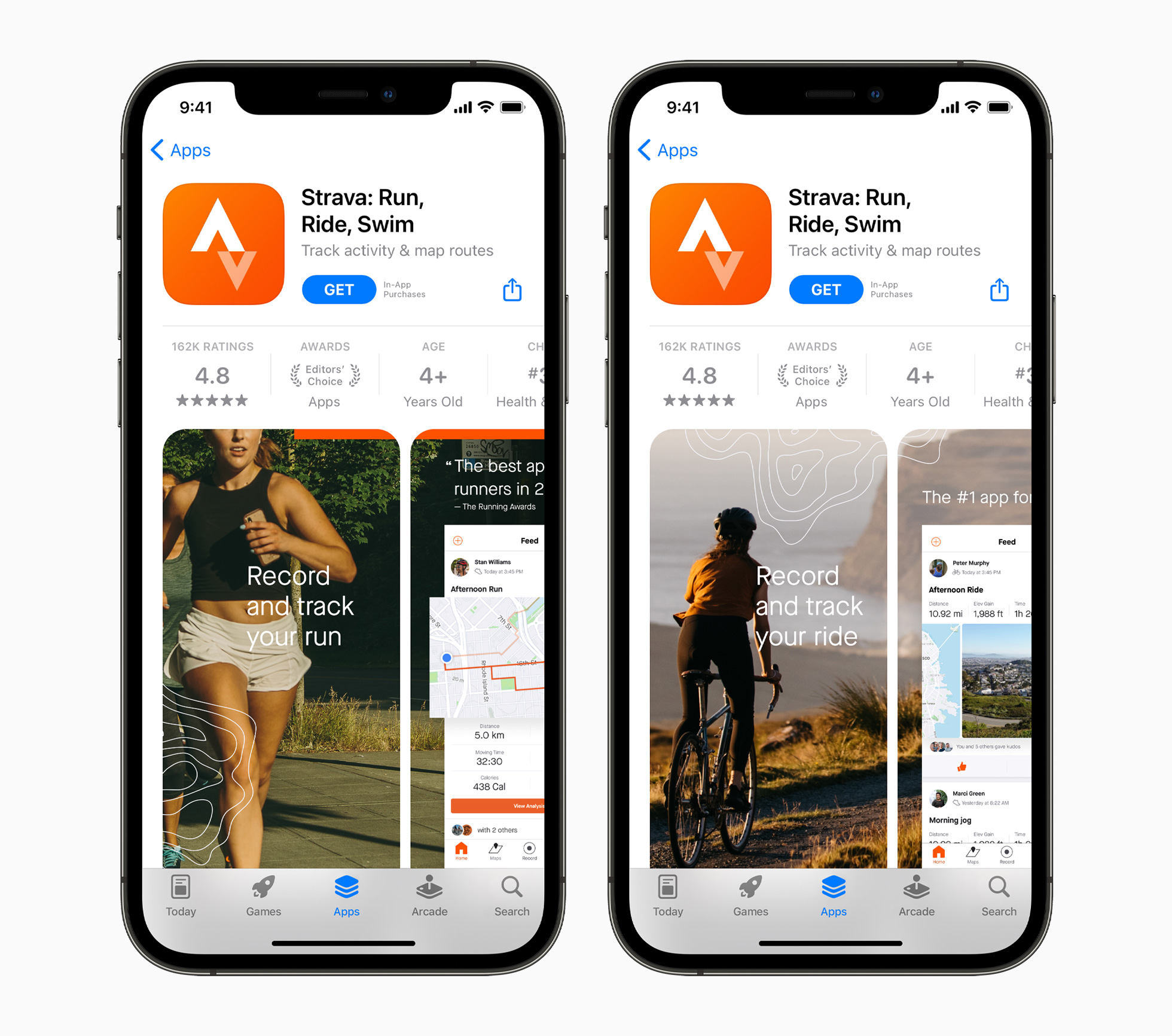 App developers will be able to try up to three different variants to test icons, screenshots, and previews. Source: apple.com

The most important part of Apple’s announcement is that developers will be able to “try up to three different treatments to see which element or piece of metadata gets the best results.” Until now, app developers had been able to use 3rd-party tools or Search Ads Creative Sets to A/B test their screenshots and videos on iOS; however, it was impossible to conduct tests that included all traffic channels inside the store. This will soon be a game-changer for anyone trying to improve their App Store conversion rates.

Going into more detail, Apple also explained that the soon-to-be-released A/B testing tool will allow marketers to compare up to three variants to the original product page, allow creative-only testing (icons, screenshots, and app previews) for tests running up to 90 days, and make results available in App Store Connect. Developers will be able to conduct A/B tests globally or in specific locales, and control their traffic split between the default and variants (all variants must have the same % of traffic).

An interesting piece of information is also that while all tested assets will need to be submitted for Apple review, developers will be able to submit screenshots and app previews they want to test independent of submitting your app for review. App Store icons will be the only exception - alternatives will have to be submitted in the binary of an app just like developers already need to do for the original app store icon.

How it differs from Google Play:

While the maximum number of variants is the same as in Google Play Experiments (three plus the original variant making the maximum “A/B/C/D” tests), the main difference is that developers and marketers will only be able to test creatives on Apple, with app titles, subtitles, and descriptions being outside the scope.

The other difference we already know of is that test assets will be reviewed by Apple’s team, a process that differs from Google Play in general. More product differences are likely to occur, but we will only know of these once Apple unveils more about their store testing functionality.

You can find all the information from Apple directly in their dedicated session of this year’s WWDC.

App developers will be able to create up to 35 Custom Product Pages in iOS15 to match the creatives in their product page with specific ad campaigns and user personas. Source: apple.com

Another major announcement from Apple was custom product pages, a way for developers to “create additional versions of your App Store product page that showcase different features or content within your app […] to reach users who might be most interested in them.” These custom pages will include “promotional text, screenshots, and app previews that are different from those on your default product page” and be accessible via a unique URL. This last point is particularly interesting as it means access to these pages will be limited to app and web referrer traffic, and their specific purpose will be to help marketers boost the performance of their ad campaigns. As a consequence, Apple’s release of custom product pages is also likely to put pressure on Facebook and Google as both ad networks require advertisers to provide a single store URL for all of their app install campaigns.

In their dedicated session at WWDC 2021, Apple shared the analytics section of App Store Connect will allow developers to measure impressions, downloads, conversion rate as well as proceeds and retention per custom product page. Furthermore, developers will be able to publish up to 35 custom product pages and submit them for review independent of your updates.

How it differs from Google Play:

However, the larger question that will likely remain unanswered for a few weeks will be how certain ad networks, such as Facebook and Google, will adjust their products to integrate this new possibility. Advertisers should also keep an eye on Apple Search Ads, as some beta testers have spotted Apple starting to offer third-party inventory; it would not be surprising to see Apple try and give an advantage to their latest inventory by making it the first one compatible with custom product pages.

As many popular apps and games regularly offer new and timely content to keep their user base active and recruit new customers, Apple will follow in Google’s footsteps and offer developers the possibility to promote their events in the App Store. To that end, developers will be able to create event cards in their App Store Connect console, and upload specific metadata to allow users to find an event card on the app’s product page and/or in App Store Search and Browse.

Uploading events will require developers to specify regional availability, highlight whether access to an event is conditional upon an in-app purchase or subscription, and fill in specific metadata for an event, such as:

Furthermore, developers will also be able to provide optional details on the event card, such as the event’s start and end date, a deep link sending users straight to the event inside the app, a mention of whether the event is targeted to a specific group of users (new users, active users or lapsed users) and the event priority compared to other events also listed in App Store Connect (developers will be able to choose between ‘normal’ and ‘high’ priority to determine which event is shown first, with events within each group being sorted by start date).

Developers will be able to submit an event to be reviewed by Apple independent of submitting an app for review and also be provided with an event URL so they can advertise the event outside of the store. Additionally, developers will be allowed up to ten approved events in their store console and up to five live events at the same time. Each event can last from only 15 minutes up to 31 days, and remain accessible via the event URL thirty days after their end although event cards will stop appearing on the App Store as soon as they end.

In terms of visibility, Apple confirmed event cards will appear on the product page above screenshots for users who already have the app installed and below for others, as well as in search results, where the event card will replace screenshots for users searching the app they already have installed (users who don’t have it yet will still see the usual screenshots or app previews). Event cards will also appear in addition to the app when users search for the event itself. Finally Apple will display event cards as part of their editorial featurings in both the today tab and the apps tab and the games tab. Personalized featurings will also show events in these last two tabs, most likely based on the event’s targeting of active users, lapsed users or new users.

Apple will also provide developers with new App Store Connect metrics, including: “view impressions, event page views, engagement, and conversion data, as well as the number of users who opted in to be notified when your event begins”.

How is it different from Google Play:

This upcoming feature is undoubtedly very similar to Google’s LiveOps Cards, which are however only available for games and in 17 Google Play markets that don’t include certain large markets, such as Spain, China, or Latin American countries.

Specific event types also differ between the two stores, but the philosophy remains very similar and shows Apple and Google are both ramping up efforts to give developers new ways to leverage existing apps and give more visibility to developers regularly updating apps.

The main unknowns around this feature are how it will affect App Store Search and featuring opportunities:

While these 3 features were the main announcements relevant to ASO at WWDC 2021, more changes are expected to come with iOS 15.

A first and logical change will be the addition of new metrics in App Store Connect regarding A/B tests, custom product pages, and in-app events, which Apple announced will be complemented by a few more new metrics, including:

The Analytics section of App Store Connect will also start including metrics for app performance on Mac OS (iPhone and iPad apps now being automatically available on macOS) as well as some specific metrics for App Clips, including card views, installs, sessions and crashes.

Another change will concern the store search results UI, which will include in-app event cards and differ for users who have already installed an app and those who have yet to download it. Hints of these changes appeared in the announcement of in-app events: “When users search for an app, the event card appears along with your app for users who have downloaded your app, while screenshots show for those who haven’t downloaded your app.”

Furthermore, iOS 15 beta users seem to have already spotted the change today, as seen in the above screenshot shared on the ASO Stack Slack.

Apple recently announced iOS 15 and some important features that will impact ASO. These include:

We are excited to see the impact of these changes - and those that have not yet arrived - on ASO! Stay tuned for essential updates on our ASO blog.

Uncover trends and valuable ASO insights on AppTweak, the #1 ASO tool for apps and games driven by data science. 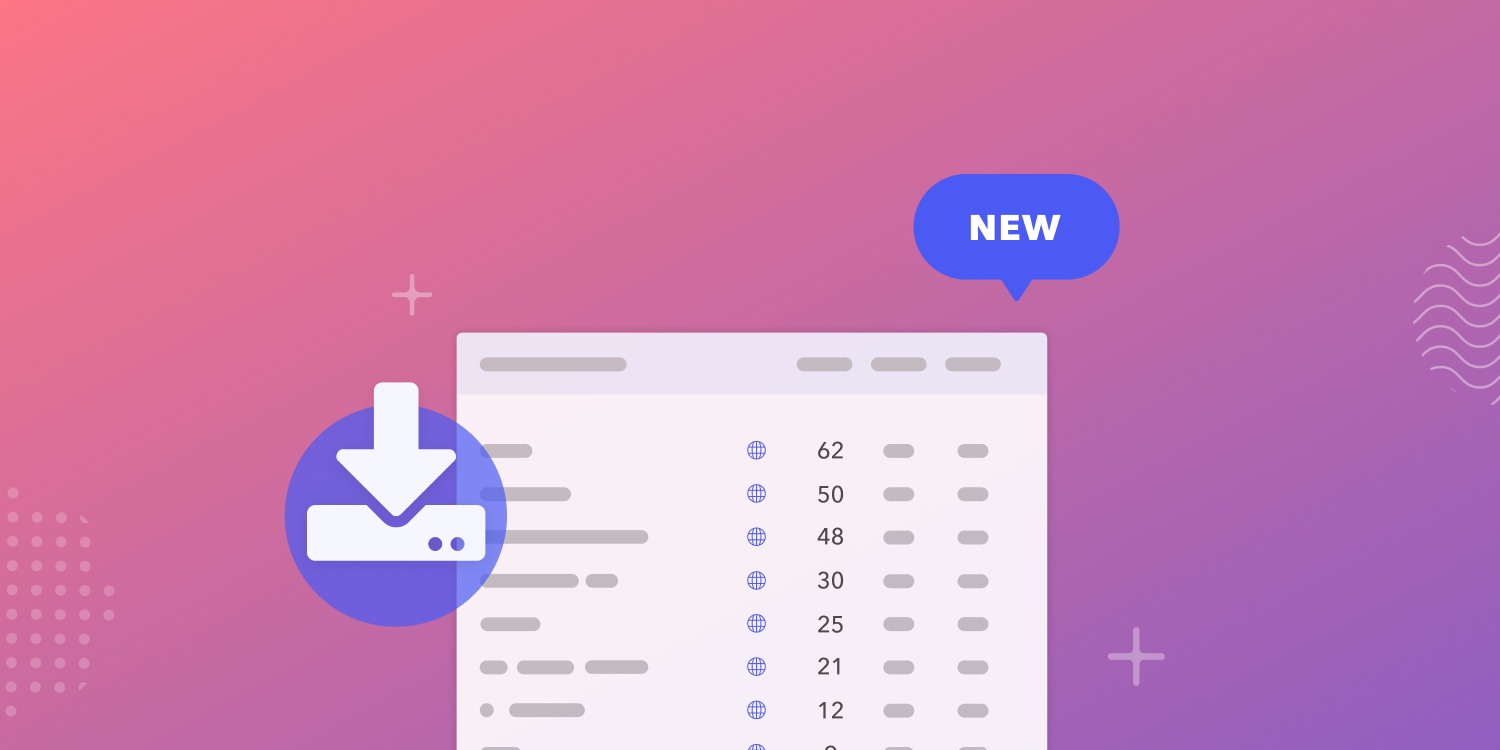 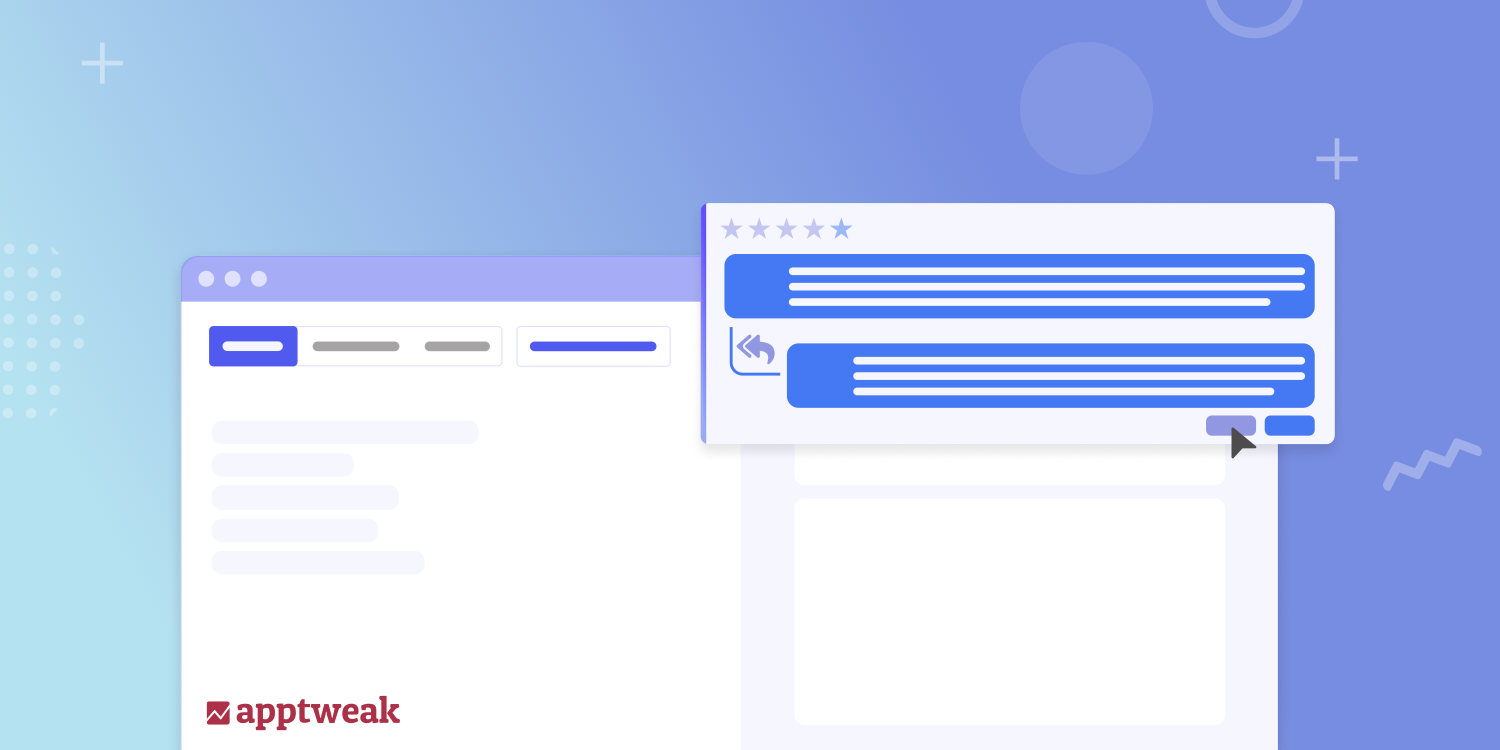