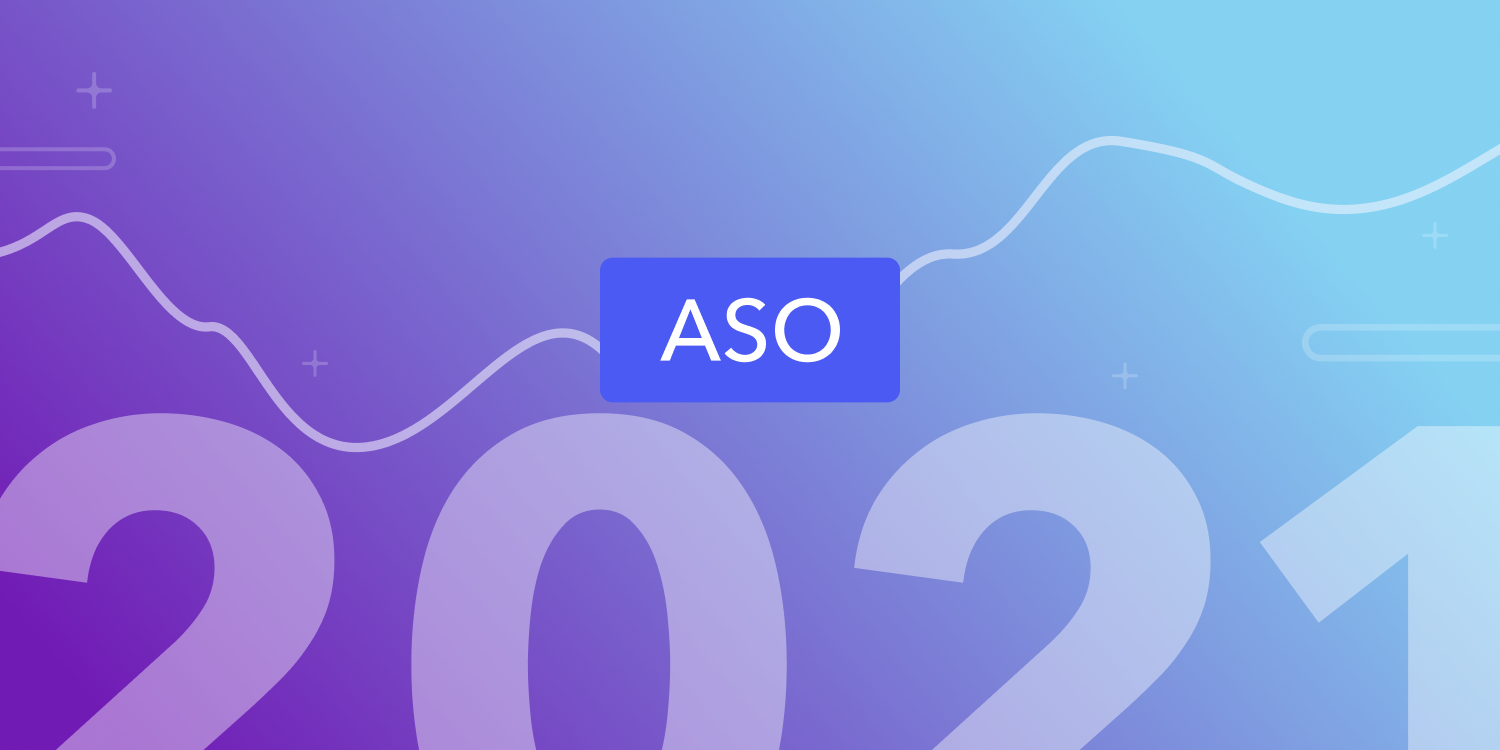 2021 was a much-anticipated year for app marketing, with the app ecosystem starting the year on an all-time high! At the same time, we also spent some of 2021 wondering when the economy would be able to restart “after” COVID-19, and the majority of expert conversations revolved around when Apple would enforce its privacy changes and how much impact they would have.

Yet more announcements and changes made 2021 an even bigger year than expected and one that will probably be considered as a turning point in App Store Optimization’s role in app marketing. As we get to the end of the year, let’s review the most important ASO changes of 2021. 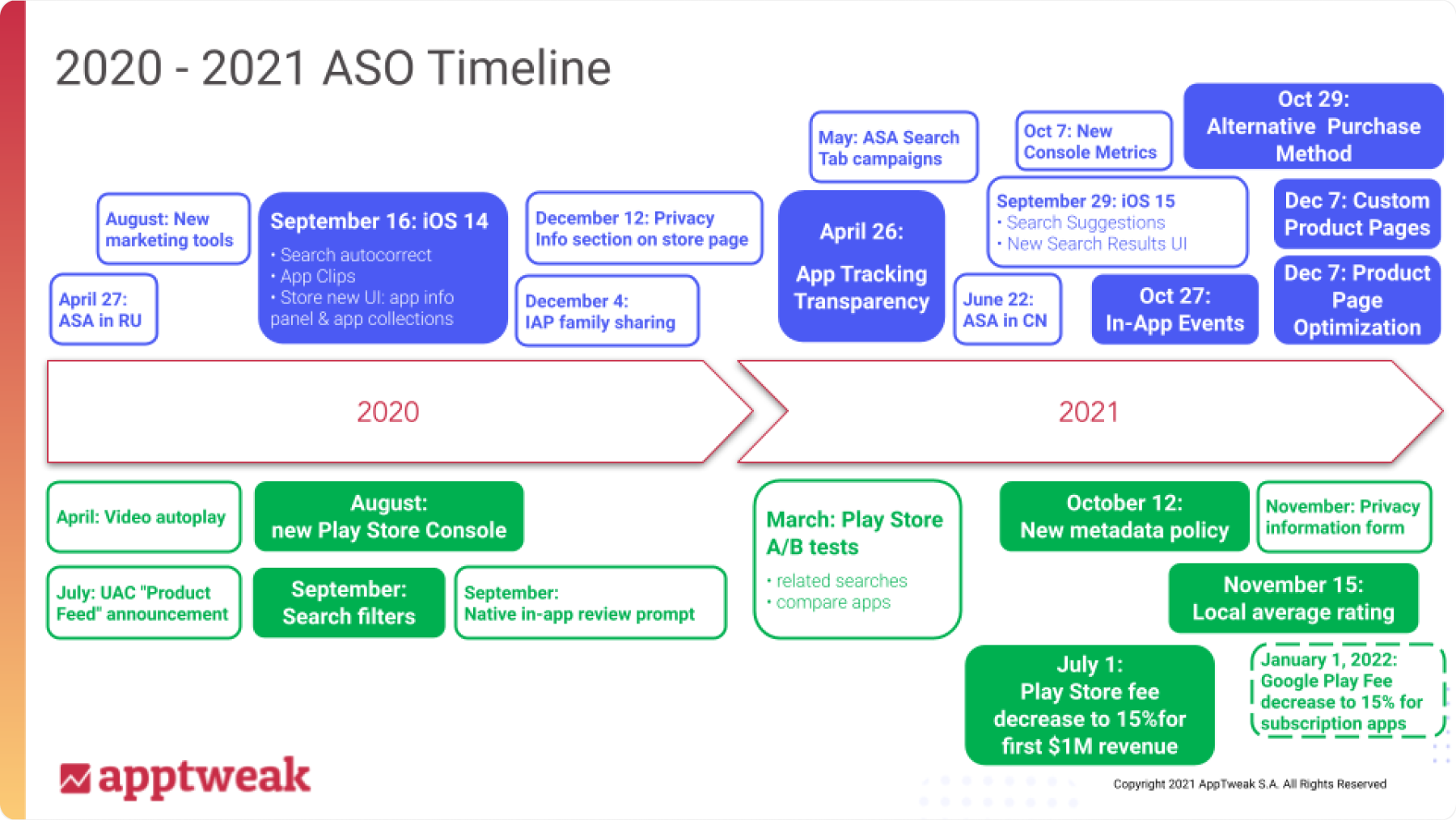 The beginning of 2021 was characterized by many conversations around Apple’s looming App Tracking Transparency framework and the threat of many apps losing access to the majority of user device identifiers, which are crucial to deterministic ad campaigns. Although ATT was only released with iOS 14.5 on April 26, and its progressive rollout meant that most apps only experienced its full impact from June onwards, developers started preparing new marketing strategies from the very beginning of the year.

Learn more about Apple’s App Tracking Transparency framework and its impact on ASO.

With expectations that paid user acquisition (UA) performance campaigns would experience a severe drop in efficiency and become more expensive, app marketers showed a newfound interest in ASO, which manifested in 3 main ways: 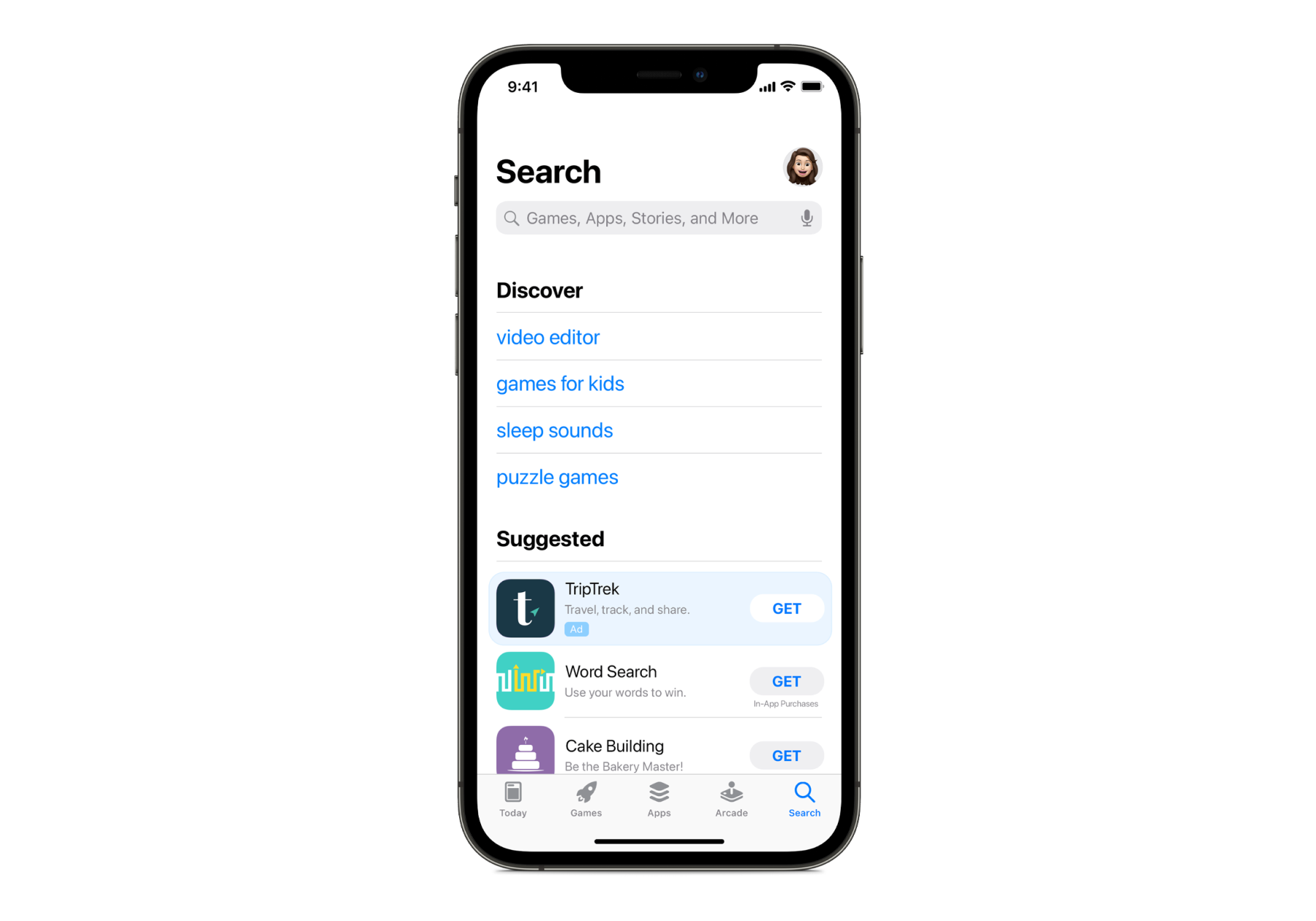 In summary, privacy changes introduced by Apple in the first half of the year started to expose the interdependencies and synergies between paid UA and ASO, at the benefit of the latter. However, this trend suddenly accelerated in the second half of the year as Apple announced iOS 15 and started rolling out new functionalities.

“When Apple closes a door, they open a window.” This saying was used by several industry experts after Apple unveiled its plans for new App Store marketing functionalities for iOS 15 during WWDC in June. Although their releases were eventually delayed to the last quarter of the year, in-app events, product page optimization, and custom product pages all immediately stirred up new conversations about how developers should prepare to utilize the App Store a lot more for marketing, as Apple made great efforts to promote its marketplace as the central stakeholder in app discovery again.

However, some not-so-small changes were introduced even before the release of these functionalities: The release of iOS 15 on September 29 saw the introduction of search suggestions, now adding a new layer of complexity to keyword optimization, as well as the removal of screenshots for already installed apps in search results, possibly redistributing the cards in the battle between apps for search visibility. This second case also added to the value of in-app events, as these may replace the screenshots in search results for apps a user has already installed, therefore helping popular apps maintain their edge over competitors in search. 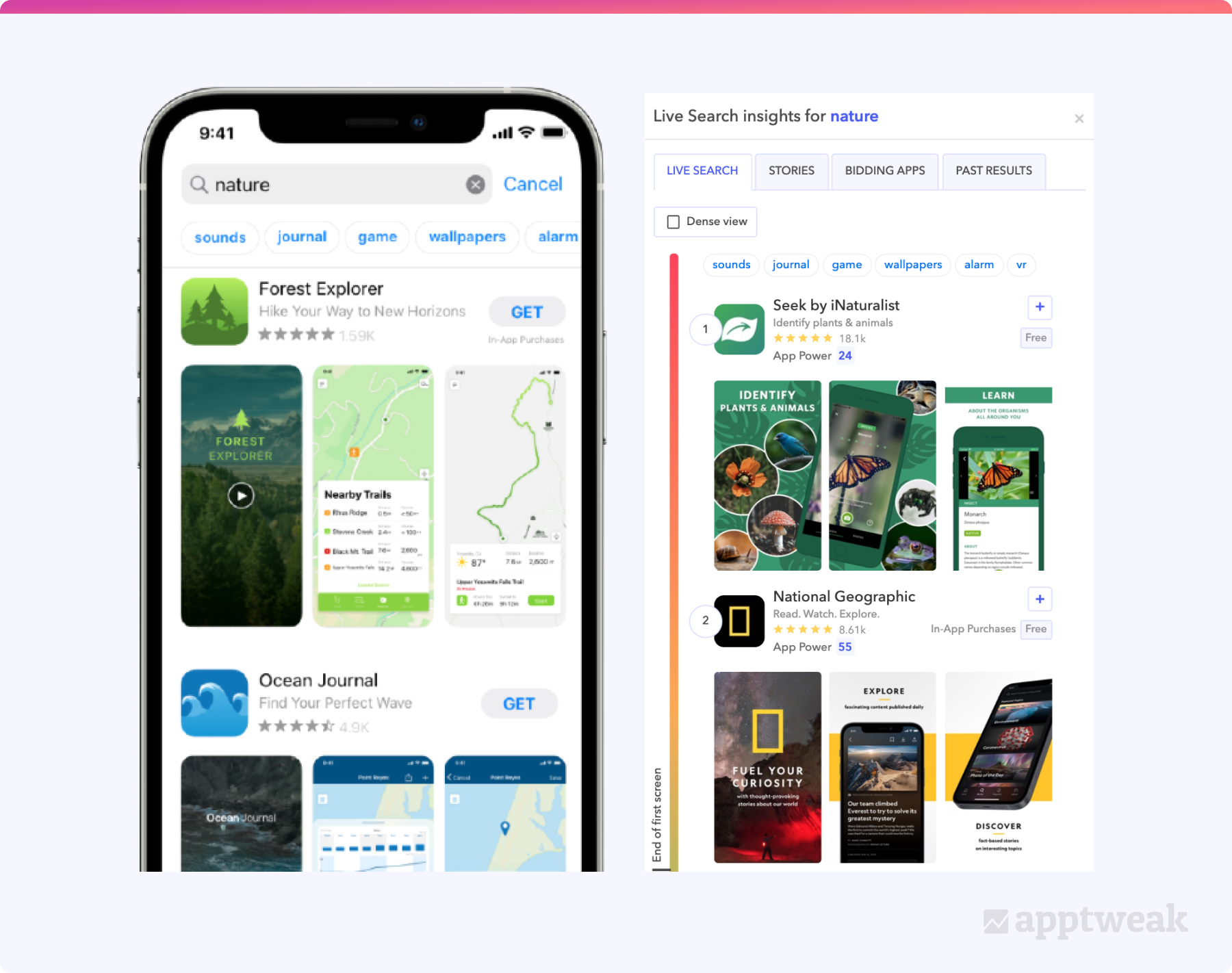 Search suggestions on the App Store (also available on AppTweak).

New App Store Connect metrics were also introduced soon after the release of iOS 15, including a breakdown of downloads into new downloads and redownloads, as well as a measurement of app updates and proceeds, all broken down by source.

This change, though not as anticipated by marketers, added considerable value to the role ASO practitioners sometimes play in analyzing data beyond pure organic results. This is especially the case in the context of other data sources, like mobile measurement providers (MMPs), losing reliability and companies now looking for multiple sources of data rather than considering one single provider as the source of truth.

The biggest changes were still yet to come, as Apple released in-app events on October 27, and product page optimization and custom product pages on December 7:

Learn all about iOS 15 with our Conversion Optimization Content Hub.

Not to underestimate changes on Google Play in 2021

Turning to the Play Store, it may seem that Google had a much quieter 2021 at first glance. Nevertheless, Google’s multiple changes throughout the year should not be underestimated, from the expansion of the LiveOps beta to the impact of new metadata policies or changes in the average rating formula:

While in-app events made a larger commotion on iOS, it’s worth noting Google Play was the first of the two stores to enable certain app developers to promote in-app content with the LiveOps beta. Initially only available to mobile games applicants, Google appears to have started responding to Apple’s launch by allowing more developers into the closed beta, and updating its policy around LiveOps to also allow apps to advertise digital sales, which Apple clearly does not allow (in fact, some app developers shared their in-app event submissions for Black Friday were rejected by Apple reviewers on the ground they were not promoting any particular in-app content but merely offering discounts). Although unclear when Google will make LiveOps available to all app developers, these changes seem already well underway in 2021.

Meanwhile, the most notable change on Google Play in 2021 was a new metadata policy that played on two specific dimensions:

The reduction of Google Play app titles from 50 to 30 characters contributes to the ever-increasing convergence between the App Store and Play Store, and may highlight Google’s will to force developers to simplify app titles to avoid false information and also facilitate work for its algorithm.

At the same time, multiple new rules surrounding app icons, titles, and short descriptions (such as forbidding the use of certain words like “free” or “#1”) are more clearly targeted at preventing developers from using dark patterns at the expense of consumers.

While the change is more than welcomed in principle and a good thing for ASO, the early implementation showed that, in practice, Google’s review algorithms do not distinguish between different semantic situations. For instance, an app using the word “hands-free” or “first love” may be flagged by the algorithm despite not using these terms to promote a price or claim a particular rank. As a result, it is likely that ASO practitioners will look for circumvention strategies in 2022.

Last but not least, Google’s change in apps’ average rating formula has been a little-commented change that could nevertheless have considerable impacts. With more users declaring they give fair weight to an app’s average rating when considering whether to download it, Google’s switch from a global to local average rating is likely to have both positive and negative impacts on Play Store conversion.

Comparing Web and Play Store ratings for Deezer in France.

4. More changes to the App Store/Google Play are in the making

Finally, a few changes that started taking form in 2021 and will carry over in 2022 concern privacy on Google Play and new policies regarding app store fees:

It appears 2022 is set to be another important year for App Store Optimization; so stay tuned for our predictions for ASO in 2022!