5 tips to identify your main competitors on the App Stores

In this article, we will present 5 ways to find competitors using 5 different features of AppTweak.

To understand your competition, you should start by studying your category. Top charts are a great way to see what apps in your industry are successful.

First you can have a look at the apps that hold the top positions in the category, both in the top free/paid as well as grossing. These are the apps that are getting the most downloads or revenues and have a great user retention. 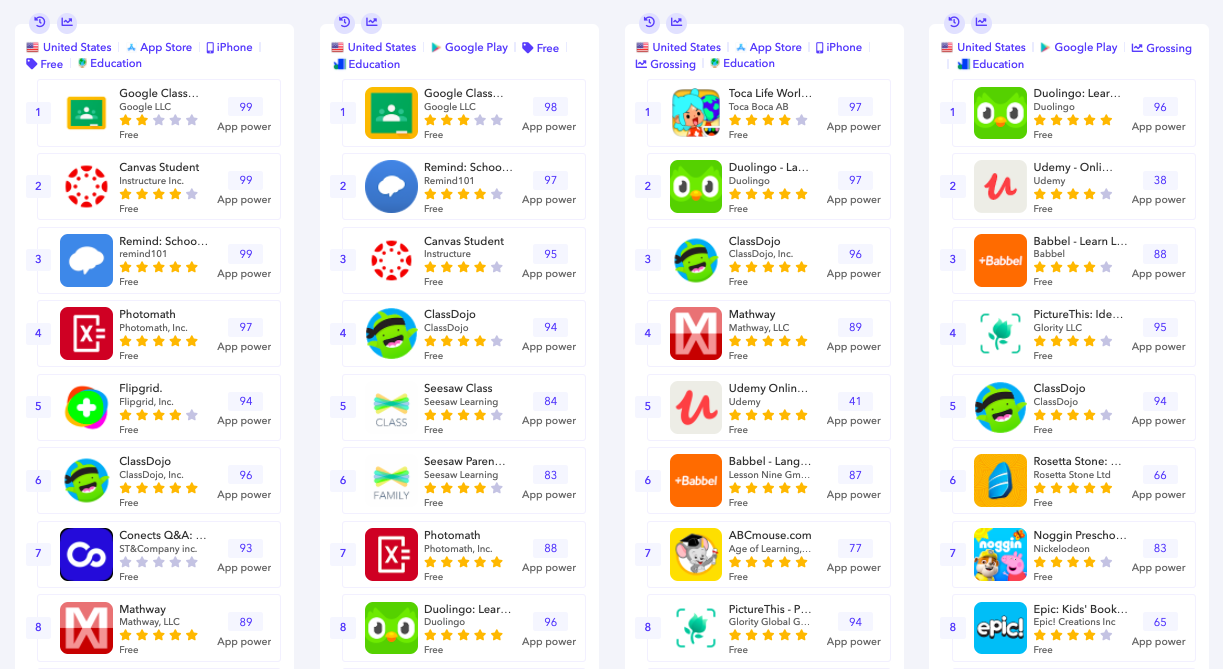 Top apps in the category Education free and grossing on the Apple App Store and Google Play Store.

You may feel like top apps are always the same, that’s why we also recommend you to also look at apps that don’t necessarily have the highest rank but that have had an impressive growth in the past weeks. Among those you’ll find new apps that are driving a lot of traffic as well as well established apps that are trending for some reason.

Apps with the best ranking growth in the category Education free and grossing on the Apple App Store and Google Play Store.

In both cases, you need to try to understand what they are doing well and find out how you can apply the same best practices to your own app.

Some app store categories are simply too broad which makes it difficult to compare your app with other apps in the category. A typical example of that is the “Lifestyle” category on iOS where you can find apps about astrology, religion, dating, wallpapers and all kinds of interests. You can use featurings on the stores to identify smaller clusters of apps within a category.

The group “Running For Beginners” featuring the top running apps was presented on September 1st in the tab Apps on the Apple App Store (United Kingdom).

To find competitors for your apps using Featured Apps, look at the groups where your app was featured and then explore the other apps in the group.

The group “Perfect your resume” was presented on September 1st in the page of the category Business on the Google Play Store (United States).

As you can see in the example above, featurings can target very specific app types. Usually only top apps are featured in these groups.

Another way to find competitors using AppTweak is with our “Similar apps” feature.

Apps that Notability recommended in the “You may also like” section of the product page on September 9th 2020 in the United States (Apple App Store).

Apps that recommended Notability in the “You may also like” section of their product page on September 9th 2020 in the United States (Apple App Store).

As we show in the screenshots above, this section displays many competing apps that have similar features or that have the same target audience.

Another nice way to find competitors is through organic search terms.

First of all, you want to make sure other apps are not stealing organic traffic from your app. In order to do that, you should do a live search of your app name or other keywords that drive most of your downloads and see what other apps are ranking. Among the results try to understand why they are ranking there : Is the app content similar? Is it a game or an app? What is its App Power? Does the app use the same keywords as your app in its title?

Live search for the keyword “learn spanish” on the Apple App Store and the Google Play Store in the United States.

Sometimes you will see that some apps that have nothing to do with your app are actually making it harder for your app to rank on some keywords. That’s what we call indirect competitors.

Live search of the keyword “cooking apps” on the Google Play Store in the United States.

In the example above, we can see that very different types of apps are ranking for the keyword “cooking apps”. Even if restaurant simulation games are not direct competitors of Tasty (recipes app), they should still be considered as competitors for keyword optimization.

Using Ad Intelligence, you’ll be able to identify the apps that are bidding on your brand or other keywords that are important to your app, even if you’re not doing any Search Ads or Google App Campaigns.

In order to do so, open Ad Intelligence and under the section Apple Search Ads or Google App Campaigns, click on Organic Downloads. In the table, you will find the list of keywords that drive the most downloads to your app. If we found an ad on these keywords, we will inform you of the share of voice of your app and other apps. In this feature, we are not looking only at the competitors that you have already selected but we will show you all apps that are bidding on your top keywords.

With Apple Search Ads, it is possible to bid on other brands (Google doesn’t place ads on brands). Use this section to discover which apps are targeting your brand.

Share of Voice of the apps bidding on the brand term “yousician” on the Apple App Store in the United States.

You can also do the same competitor analysis by looking at generic keywords for which you already have a good organic visibility. For Apple Search Ads, you can see which apps are attacking you on this keyword (same as before). While for Google App Campaigns, the apps are placed by Google and apps can’t choose the keywords. This means that these apps might not be attacking you directly. Nonetheless it can still be interesting to have a look at the apps to understand why Google placed that app on this keyword.

Share of Voice of the apps bidding on the keyword “guitar lessons” on the Apple App Store in the United States.

Share of Voice of the apps that are placed on the keyword “guitar lessons” on the Google Play Store in the United States.

In the examples above, you can see that Chorify is spending a lot on advertising on both stores. This app doesn’t have a lot of organic visibility on these keywords but is attacking Yousician with advertising.

To conclude, there are many ways to find new competitors for your app. Try to go through each of these methods and pick one or two apps at each step. Keep in mind that it’s better to compare your app with 3 good competitors than 20 bad ones.

We hope you enjoyed the reading and look forward to putting this methodology into practice. Let us know how your competition analysis went!