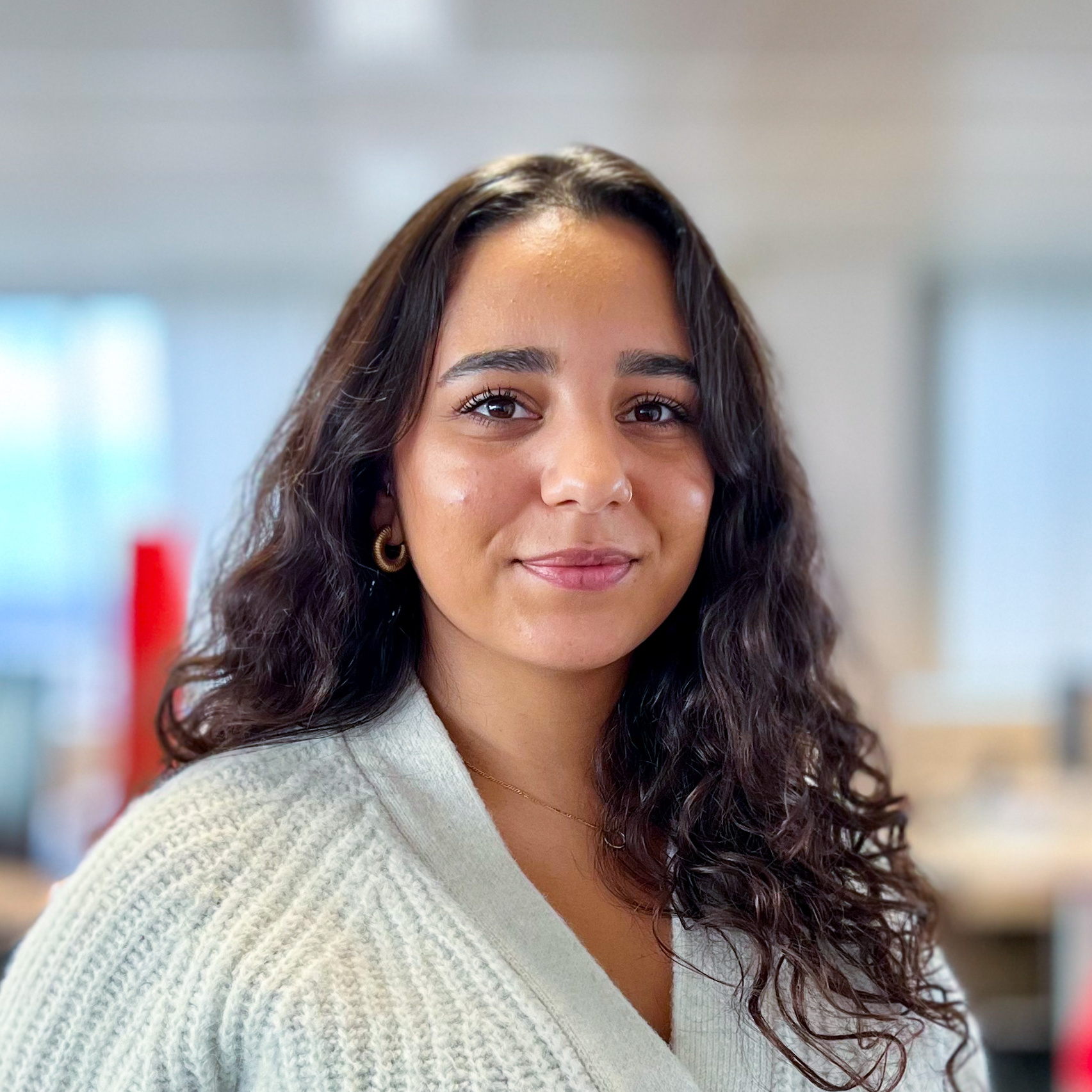 Last year, we noticed that many of the top 10 apps in the Shopping category held onto their high rankings during Black Friday promotions. Something similar happened this year, with one app holding onto its #1 position throughout the year and only a few changes around the other positions. Read this blog to take a look at the impact of Black Friday campaigns on Shopping apps in 2021!

A trend we noticed this year is that Black Friday was big, but not momentous like in previous years; for the very first time, Black Friday shopping decreased. According to Adobe Analytics’ 2021 Holiday Shopping Report, consumers spent $8.9 billion on Black Friday this year, down from $9 billion last year.

While this only represents a slight decrease in spending, this is nevertheless a big change from the typically record-breaking Black Fridays of previous years. As per the report, this trend could be due to an increase in early purchasing, since several retailers began sales and promotions as early as October. When buyers did make online purchases on Black Friday, Adobe reports that 44.4% of those sales were made through smartphones, an increase of 10.6% from the previous year.

To help you better understand the impact of Black Friday on Shopping apps in 2021, we have analyzed how download estimates fluctuated for different apps during the event! As shown below, the top charts of the Shopping category (US App Store) remained quite stable during Black Friday: 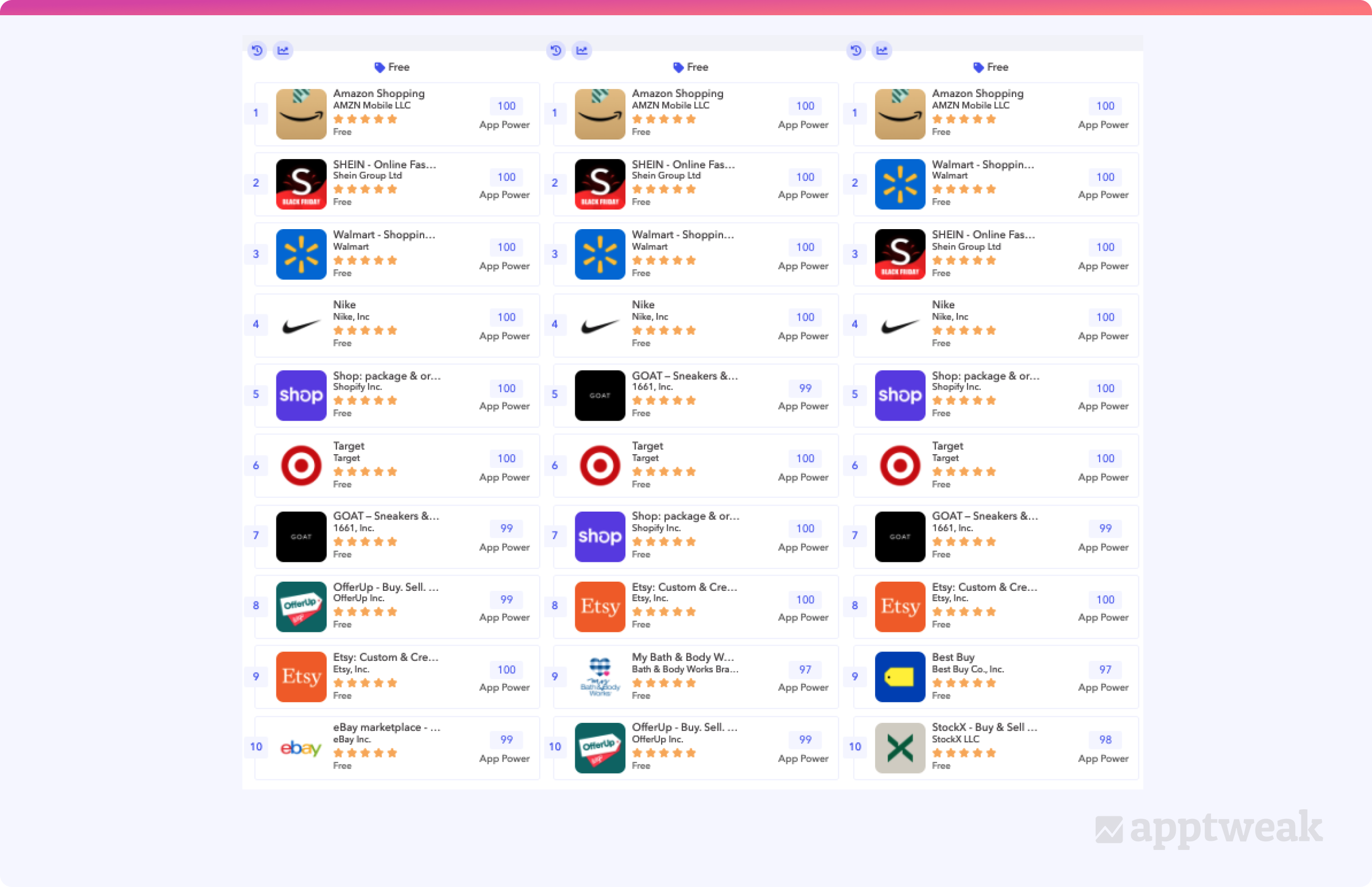 We’ll now take a closer look at the apps that particularly benefited (or not) from Black Friday 2021 on the App Store.

Amazon Shopping ranked in the #1 position of the App Store Shopping category for nearly all of 2021, except for a few days when the daily downloads for SHEIN exceeded those of Amazon Shopping. On November 1, SHEIN changed its screenshots and icon to promote Black Friday sales on its app. Although the app’s estimated downloads increased afterward, it is hard to solely attribute the increase to SHEIN’s creative updates, as most apps in the Shopping category also saw their downloads increase in November.

Starting from the week of Black Friday, SHEIN and Walmart began promoting Black Friday online discounts. As a result, Walmart’s daily downloads jumped from around 32,000 (Sunday 21) to 43,000 (Friday 26), surpassing SHEIN and ultimately ranking #2 in the Shopping category on Black Friday.

SHEIN users might not have been waiting for a special Black Friday deal as the app is known for its regular promotions throughout the year; as a result, both Amazon and Walmart may have benefited from increases in organic searches for their brands. Amazon remained ranking #1 and maintained its advantage through Cyber Monday (November 29), a day on which the app managed to increase its daily downloads from around 45,000 to 60,000.

Already want to start preparing your app for next year’s Black Friday? Read this blog for tips, tricks, and best practices!

Although Etsy changed its screenshots on October 18 to a more festive look, neither of the two apps made changes to their App Store metadata or screenshots to prepare for Black Friday deals. Both apps released promotional advertising around the holidays in November and there may have been changes in their keyword fields that lead to increased downloads. Additionally, users might have searched more organically for the best promotions on Etsy and (especially) Best Buy at this time.

Both OfferUp and eBay marketplace experienced fluctuations in estimated daily downloads. While OfferUp did not make any changes to its metadata or screenshots to prepare for Black Friday, eBay marketplace gave its store listing a complete makeover on November 19. However, this revamp referred more to the general holiday season and not specifically Black Friday. The app’s screenshots and video were updated for a new festive look and eBay’s metadata now includes keywords like “gifts”, “holiday deals”, and “sales”.

Perhaps due to strong competition and because neither of the two apps specifically promoted Black Friday, their rankings in the Shopping category decreased and neither app was able to continue ranking in the top 10 on Black Friday. OfferUp lost a significant number of downloads during Black Friday week (from around 19,000 daily downloads (November 21) to around 16,000 (November 25)), while eBay remained quite stable with daily downloads staying around 18,000 through the week. As a result, while both apps’ rankings decreased from the top 10 to the top 20, eBay marketplace managed to surpass OfferUp. This change in ranking is probably due to eBay’s metadata and screenshots changes to prepare for holiday savings and promotions.

Use ASO to increase your app’s visibility for Black Friday

Apps ranking on the keyword “Black Friday Deals” on the US App Store.

Investing time into ASO for seasonal events usually helps to increase traffic and the conversion rate of your app store listing. On Black Friday, when users already show intent and specifically search for Black Friday deals, it makes sense to invest a little time into updating your metadata. Let’s take the example of Slickdeals, who came prepared for Black Friday 2021 and managed to rank #2 on “black friday deals” during the week of the event. 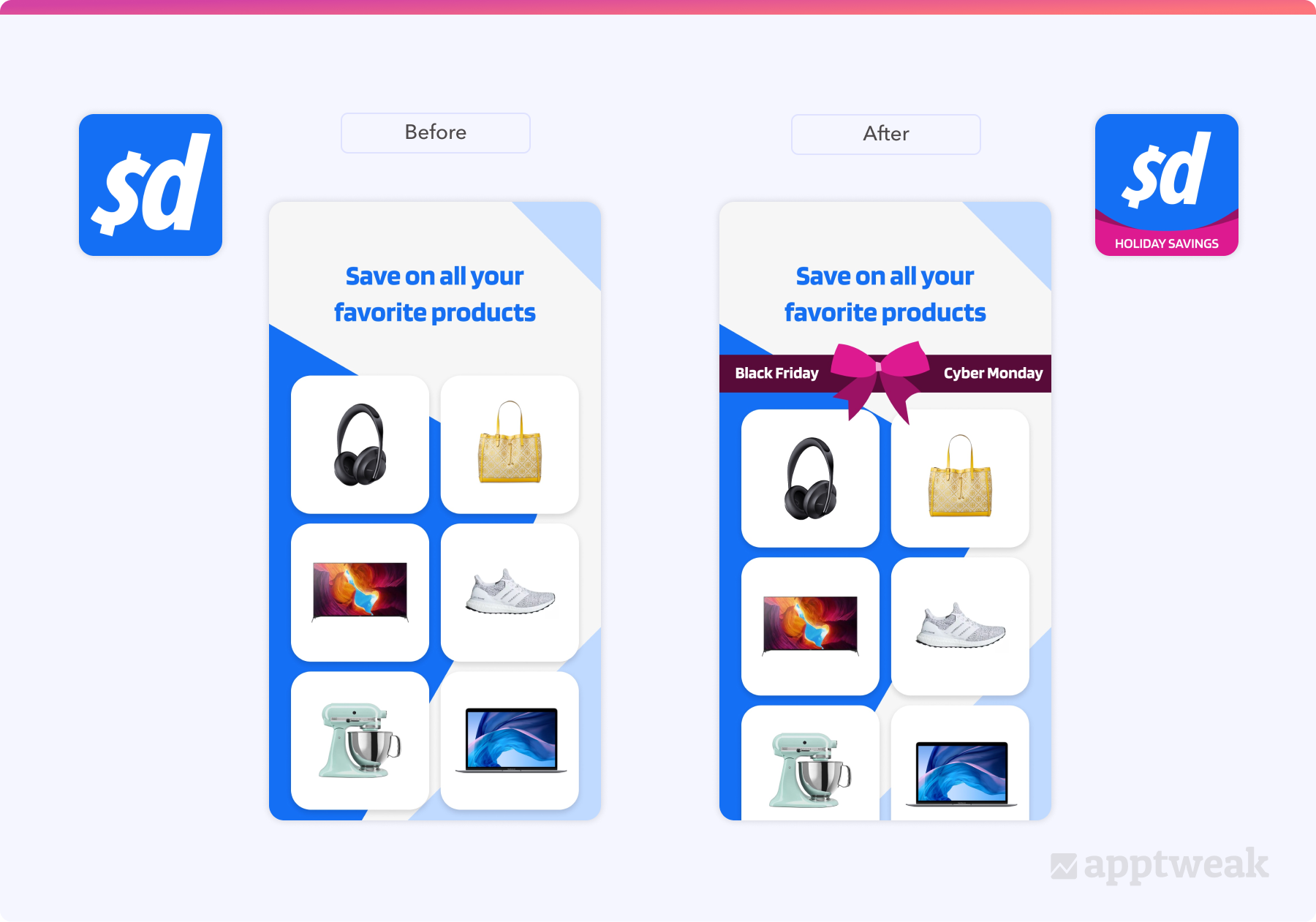 The impact of these changes was huge: First of all, Slickdeals managed to rank #2 on the keyword “black friday deals” for one week until the app reversed its store listing changes on December 3. In terms of downloads, the app experienced growth of around 56% in estimated downloads from Monday, November 22, to Thursday, November 25 (Black Friday). These results should convince you that developing a seasonal ASO strategy is definitely worth it.

For the first time in many years, Black Friday was not record-breaking for Shopping apps. This is likely due to changes in online shopping and promotional plans this year, as we also saw that sales during Thanksgiving were lower than in previous years. The last couple of years have seen “Black Friday” become more of “Black November” and it will be interesting to see how the trends in online/in-store shopping continue in the future!

Want to check out AppTweak’s ASO tool for yourself? Sign up for a 7-day free trial to view top category rankings, download and revenue estimates, and even changes in keyword rankings!

Yasmin is an ASO Expert at AppTweak, helping to boost your app's visibility. She enjoys exploring different cultures and constantly adds new books to her TBR list.