View and Compare Your App Analytics Across Countries

As you probably know, we recently revamped our Analytics section on AppTweak, making it easier to keep track of your app’s performance in a given country and measure the impact of your ASO efforts on your app’s metrics.

With this redesign, we also made it easier for you to switch your analysis to a cross-country view to compare your app’s performance across countries! All you need to do is select “worldwide” in the country selector in the app header.

In this blog, we show you various examples of how to get the most out of the worldwide view in Analytics.

The rank of your app in its category can vary from one country to another. With the worldwide view, you can rapidly spot countries where your app is ranking under its average. This can be due to fiercer competition in that market, or high-performing local players. Maybe these markets need further localization efforts for the app to appeal to users.

The example below shows Amazon Music’s category rank in the Music category (iOS) across the globe. We can see that the app is very popular in English-speaking countries such as Canada, the US, India, and Australia. The app also seems to have a strong position in Western Europe, Mexico, and Brazil.

We can also immediately spot a series of countries in which the app is underperforming. For instance, Amazon Music typically shows lower ranks in other Latin American countries or in Eastern and Northern European countries.

Knowing this, it’s worth asking yourself what at the top-performing apps in the Music category for those countries? A quick look at the corresponding Top Charts already gives some insights.

We immediately see that Spotify is the n°1 app in all these markets. Soundcloud and YouTube Music seem to also have good visibility in all of these countries. Other popular music apps include Shazam and GuitarTuna. In Latin America, Musica XM is also a trendy app as well as some local national radio apps. A closer look into some of these apps might give some ideas as to how to tap into these markets.

By better examining the top-performing apps within a market or region and looking closely into their metadata and their marketing campaigns you can better understand the roots of their success.

Quickly identify the countries in which your competitors are thriving

The worldwide view can also help you understand in which country your competitors are getting most of their downloads or revenue. This can help you gauge the potential of a country. If we take some of the apps mentioned above and compare their download estimates worldwide, we can depict some very clear trends.

If we compare the worldwide download estimates of the top-performing music apps in the App Store we can see that, even though these apps all rank very well in most countries, they all concentrate the majority of their downloads in the US. This shows us just how massive the US app market is.

Let’s look closer into the worldwide download estimates for each of these apps:

Looking at the worldwide view of various apps in your category can help you understand which markets represent a high potential for downloads. Of course, we recommend looking closely into your direct competitors rather than the top apps of your category. It’s also noteworthy that you look at both the App and Play Store since results can be very different from one Store to another.

On the Play Store, there is no one single top download countries but rather several countries including the US but also Brazil, India, Russia, and even Egypt! Spotify and Amazon Music seem to have a high concentration of downloads in India, whereas Brazil stands out as the top market for YouTube Music and Deezer.

Get cross country insights for any of your app’s analytics

There are tons of insights to gain from the worldwide view. You can repeat the exercise detailed above for revenue estimates and spot which markets are the most lucrative for your competitors.

If you integrate your consoles, you will also be able to check out your app’s impressions, page views, store listing visitors, and acquisitions worldwide. This can help you spot high and low-performing countries and adapt your marketing campaigns accordingly. You can also compare your app’s conversion rate from one country to another and see if some countries need extra efforts on creative optimization to boost conversion.

9 tips to optimise your app screenshots

Finally, the worldwide view is also available for Google Install keywords. Once your Google Console is synced with AppTweak, you can select the keywords you’d like to plot on the world map and check in which countries they are driving the most traffic and installs to your app. 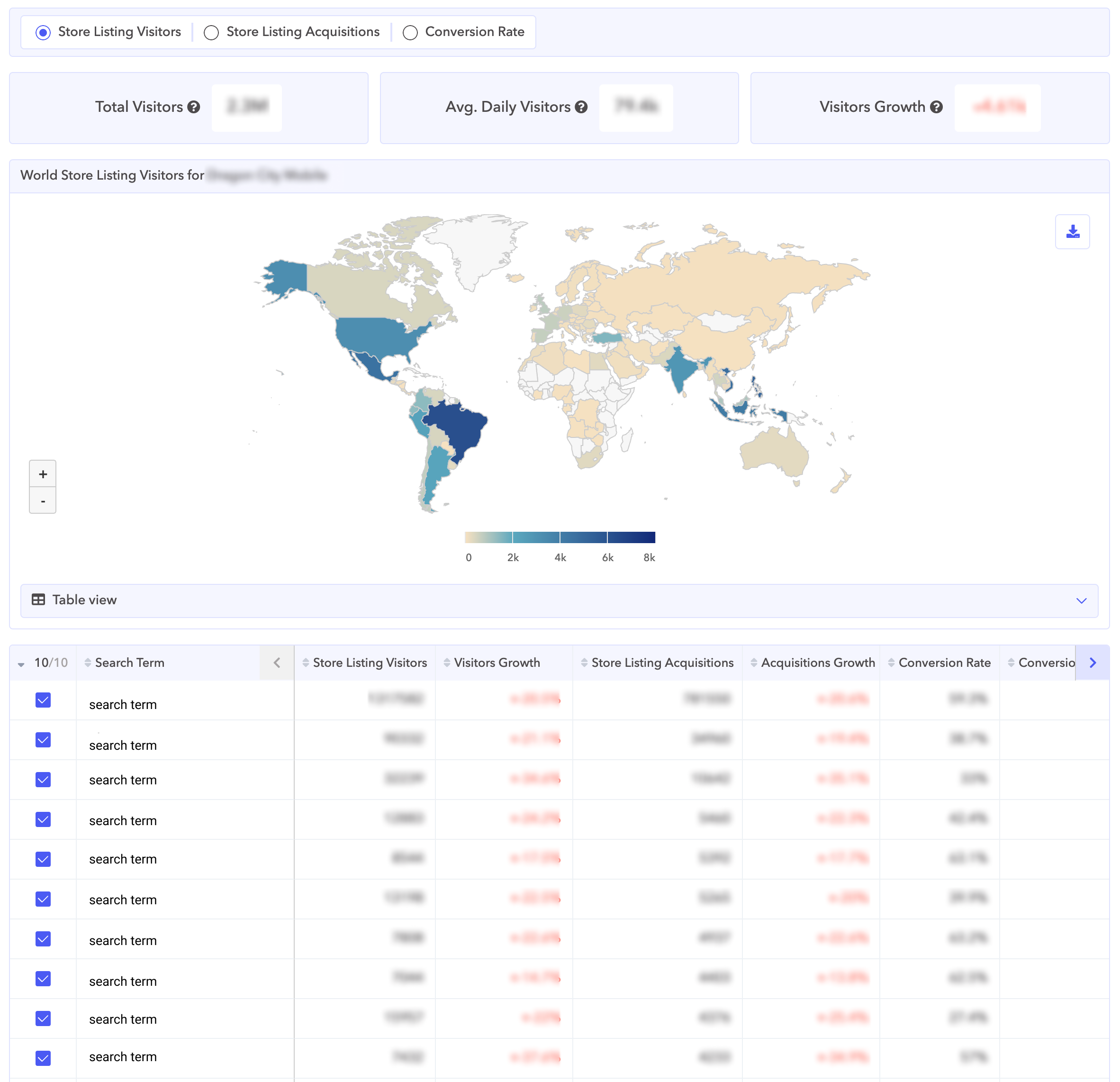 I hope this blog has got you inspired to bring your analysis to a cross-country level. If you want to dig deeper into this type of analysis, make sure to check out our App Intelligence Add-On.