What are the ASO trends you should watch out for? Recently, our ASO Experts got together to discuss what App Store Optimization (ASO) trends they believe will be key in growing your organic downloads.

2019 was a dense year for App Store Optimization, with many changes hitting the Apple App Store and Google Play Store. Here are 5 trends I believe will have the most impact for apps’ top strategies in the stores in 2020:

It has already been some time since Apple started putting its focus for the App Store on creating quality editorial content, and 2019 was a year that emphasized this trend. This is indicated by the way in which more and more editorial stories are listed in the search results for non-exact-match queries. As Apple’s editorial team writes more content - in particular, lists of apps for certain purposes - organic results can be pushed below the fold of the search results screen. 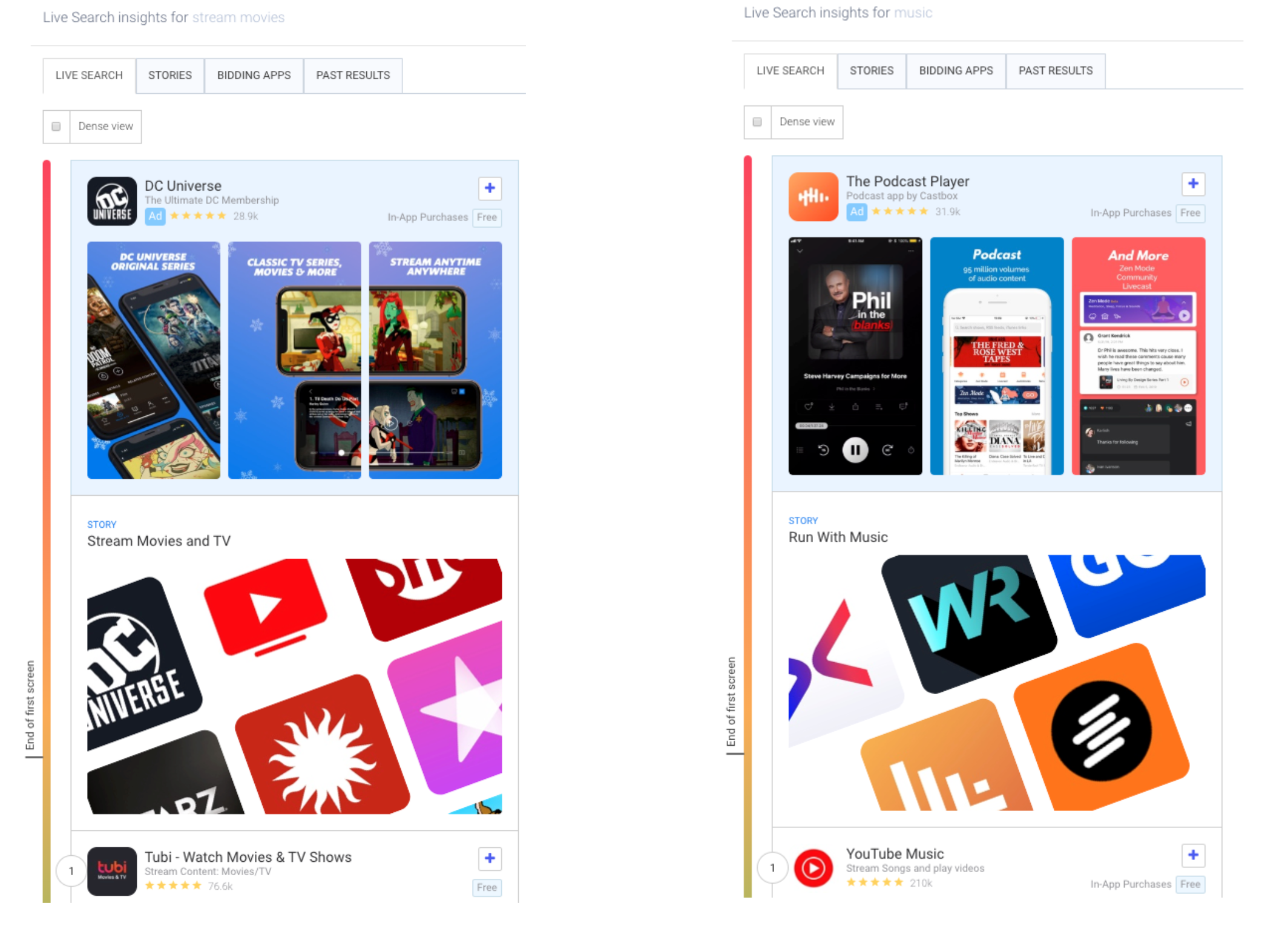 When searching for “stream movies” or for “music”, an Apple Search Ad and a story appear first in the Apple App Store search results, hiding the first organic result from the first screen.

Furthermore, the release of Apple Arcade in September 2019 as part of iOS 13 led to the creation of a new tab in the App Store, giving special visibility and featurings to games that are part of the new Apple service.

As for the Google Play Store, recommendations have long been an important part of traffic, with browse traffic from category rankings, similar apps and other store placements already representing over 50% of organic traffic for quite some time. However, Google put more emphasis on recommendations in 2019, and reported in the 2019 Google Play report that “[their] investment in the curation process for the Google Play Store accounted for over 46% of installs […]”.

This emphasis on app recommendations is likely to continue in 2020, as both stores aim to be perceived by users as services and not just marketplaces. App developers will also be more enticed than ever to accept this position, as the short term ROI is much higher than UA blasts or keyword optimization, and stores are starting to develop loyalty programs for users.

2. Keyword strategies will become more complex than ever before

Despite the overall increase in store traffic deriving from the incremental growth of users and the addition of new locales, organic search traffic seems to be the marketing channel most at risk when looking at the share it represents.

Not only are both stores putting more focus on recommendations, but the growth of Apple Search Ads and Google UAC is also redistributing the cards concerning visibility in search results. At the same time, brands keep driving the highest search volumes as we’ve seen that only 120 of the 500 most searched keywords of 2019 are not branded terms (a decrease of 22% compared to 2018). All these trends are building a threat to how app developers are likely to invest in organic search visibility in 2020.

However, this does not mean that keyword optimization ends in 2020. In fact, with the increased complexity of store algorithms, app developers looking for incremental growth will need to develop new strategies to keep or increase the amount of organic downloads they receive. More elaborate keyword strategies will be needed, particularly to influence recommendation algorithms that determine visibility in ‘Similar Apps’ sections and stories shown in search results; as well as to appear as an alternative in competitor-related queries. 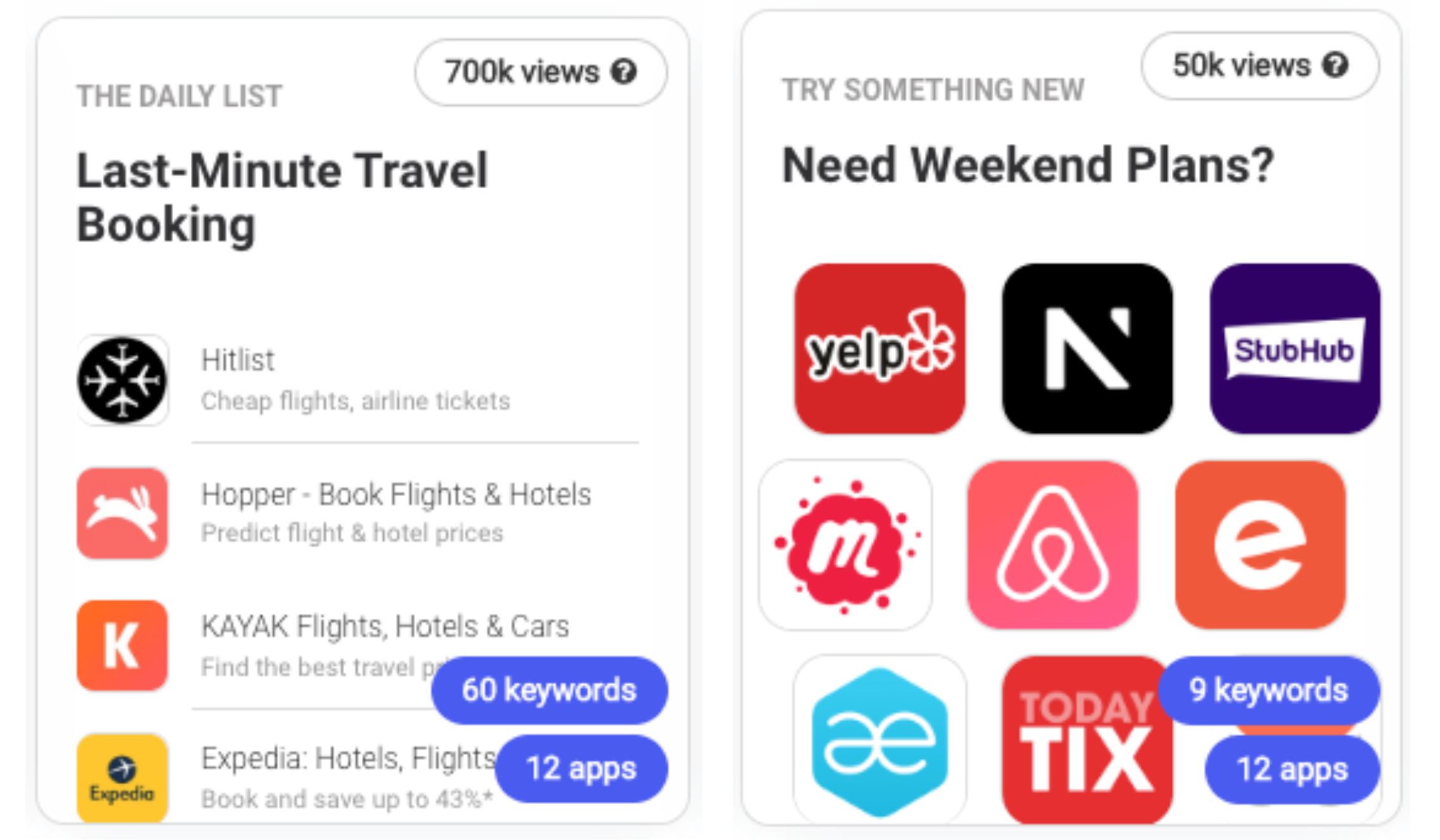 3. Creative optimization will focus more and more on videos

Promotional videos in the app stores have long been an item that few apps dared to include - store guidelines can be strict and the impact on conversion is not guaranteed. Nevertheless, videos have become a standard in some verticals such as gaming, and both stores are giving increasingly more importance to video assets.

In 2019, Google announced it would start auto-playing promotional videos in the Google Play Store - a major shift from redirecting users to YouTube when they clicked on a store listing video. Apple also worked on some video features, such as the addition of portrait video banners in the product pages of Apple Arcade games.

Apple Arcade Games have a video autoplaying at the top of their product page.

While there have been no announcements from either Google or Apple about adding new video placements, these changes show that video is a likely focus of innovation for both Apple & Google in 2020.

4. ASO best practices will include more marketing content and be less product-oriented

A likely consequence of the increasing role of recommendations and video assets is that top apps will use more of a marketing approach, playing at the edges of store guidelines, at the expense of product-oriented approaches.

With the ever-growing number of apps available in the Apple App Store and Google Play, differentiation has become more about brands and less about products. More and more apps are working on ways to underline brand statements in their store product page, even if it means less room to display their product. This trend was illustrated with the winners of the first ever ASO awards in 2019: all three apps that won awards for their creative sets used their first screenshot to introduce a brand statement of some sort, while Hopper (best video) only showed UX footage after the first 4 seconds of its app preview.

Winners of the different best screenshot categories from the ASO Awards 2019.

The increasing importance of recommendations also calls for more story-telling, and therefore a more marketing-oriented ASO strategy, as editorial teams will be looking for innovative contents to highlight apps.

Marvel Strike Force was featured in several stories highlighting stories around the app, including how the creative team behind the game made their choice for the game’s star villain.

While algorithms get more complex, both App Store Connect and Google Play Developer Console remain quite opaque in their data measurement process and experienced several bugs over the course of 2019. As the need for detailed ASO results intensifies, ASO specialists will look for new ways to measure return on investment, trying to measure advanced metrics. For example, practitioners will attempt to measure downloads per keywords per country by using dedicated tools or coming up with proxy metrics in coordination with their User Acquisition team. Coordination between ASO and Apple Search Ads strategies will be the first process in line, but challenges to better understand retention and revenue from ASO efforts are likely to take certain teams further.

Need to convince your team to start investing in ASO? Read this blog to build a persuasive argument!

To conclude, 2020 is an important year for the maturity of ASO and is likely to bring a fair share of changes in the industry. Keep an eye out for the following ASO trends: