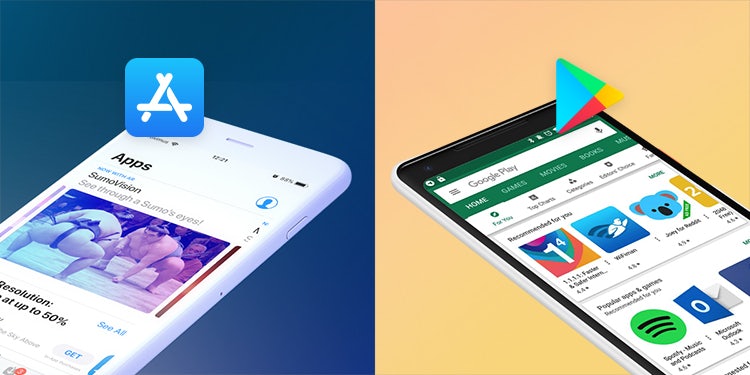 Most app developers and marketers launch their app in both the Apple App Store and Google Play Store. Although both stores serve the same purpose - to help users discover and download apps - they are actually very different ecosystems. In this blog, we will closely examine the main differences between ASO on the Apple App Store vs Google Play Store.

This means that, even though iOS and Android app pages have similar fields (including: app name, subtitle, long description, screenshots, video and ratings & reviews), these fields do have very different impacts on keyword rankings and conversion rate optimization (CRO):

From an ASO perspective, the app title is a strong ranking signal in both the Apple App Store & Google Play. That means that, for both iOS and Android apps, you should always include your most important keywords in your app title.

The most straightforward difference between the app name in the Apple App Store and Google Play is the character limit (30 characters for iOS apps and 50 characters for Android apps).

However, the app titles serve very different purposes in each store. In the Google Play search results, only the app icon and app title show, so the title needs to explain to users what the app is actually about. This is less important in the Apple App store: here, there is also the subtitle and screenshots or video in the search results which all help convey to the user what the app is about.

When searching for the keyword ‘travel’ in the Apple App Store, every app shows together with the app icon, title, subtitle and the first three screenshots. In the Google Play Store, only the app icon and title show.

Quick Tip: Repeating a keyword in the app title and short description might improve your chances to rank in the Google Play Store as keyword density is an important ranking factor. In the Apple App Store, repeating keywords is a waste of valuable space as it will not help you rank higher.

But the subtitle (for iOS apps) and short description (for Android apps) appear on very different places in the search results and on the app page:

That means that the subtitle or short description serve different purposes in terms of conversion rate optimization:

Just like in the old SEO days, there is a 100-character keyword field for iOS apps. The keywords, invisible to users, are a main ranking factor and help Apple decide when to show your app in the search results.

Interested in the difference between SEO and ASO? Check this blog out for more info.

The main purpose of the long description in both the Apple App Store and Google Play is to explain to users your app’s main features and benefits.

But, in terms of ASO and keyword optimization, the long description has a very different purpose in the App Store vs Play Store.

In the Apple App Store, the long description is not a ranking factor. As a result, when writing a long description for your iOS app, you can be creative, speak to your brand and really focus on explaining to users why they should download your app.

By contrast, the keywords used in the long description do rank in the Google Play Store. Therefore, you should write a long description for your Android app according to SEO best practices. For example, it is important to maintain a good keyword density (2-3%) for your most important keywords - this helps explain to Google what your app is about and when to rank your app.

While keyword optimization is a vital part of ASO, there are many other factors which can impact your app’s ranking and visibility in the app stores. With AppTweak’s ASO Intelligence tool, it is much easier to ensure you don’t neglect any other critical ASO elements.

In the Apple App Store, you can add up to 10 screenshots; in the Google Play Store, the number of screenshots is limited to 8. But that is not the only difference:

That means that screenshots have a more important role in terms of conversion rate optimization in the Apple App Store vs the Google Play Store. Although in both stores, the screenshots should explain to users the app’s main features, it is more important for the App Store that you design screenshots that make your app stand out from the competition and grab users’ attention.

Examples of connected screenshots from Airbnb, Shazam and Waze

App preview videos play a major role in conversion optimization in the Apple App Store. The first video you add to your app page appears in the search results alongside the first 2 screenshots and autoplays on mute as users scroll through.

Apple maintains very strict guidelines for the preview videos. They should be short and to the point and show a user’s journey when they use the app. You can add up to 3 preview videos in either portrait or landscape mode. Only the first one will show in the search results, the other two videos will show on the app page before the screenshots.

What Google calls ‘promo videos’ are YouTube videos that can be added to your app listing. The promo video appears on your app listing before the screenshots. But, since recently, promo videos also autoplay in the search results for a branded search. The video might additionally be shown when Google features your app or game in other parts of the store.

You can only add one video and it is advised to have it shot in landscape mode (YouTube’s format). Google also allows more creative freedom when it comes to videos. You can show off your in-app experience or highlight how users can benefit from downloading your apps. Monetization must be turned off.

You can use AppTweak to see the top 10 backlinks linking to your or your competitor’s app webpage.

Example of the backlink feature in AppTweak.

The Apple algorithm, on the other hand, does not take backlinks to your webpage into account, hence generating backlinks to your Apple webpage does not have to be a part of your ASO strategy (for now). However, it still remains important in terms of branding and overall app marketing strategy.

Apple & Google use their own algorithms to rank apps in the search results, but the user interfaces are also very different. Here are the main difference between the Apple App Store & Google Play:

Use AppTweak to spy on your competitors and find new keyword opportunities to optimize your app page.