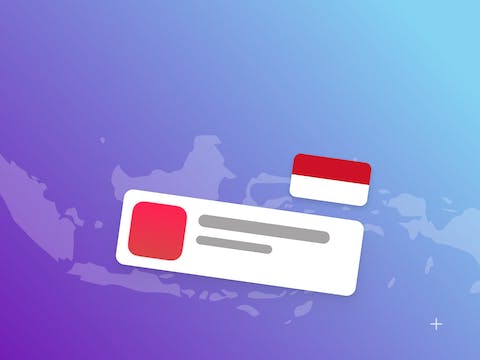 How to Localize Your App for Indonesia

As the fourth most populous country in the world, third country that drives the most downloads on the Play Store, and the third largest digital economy by 2025 – Indonesia is booming. Localizing your apps and games for Indonesia, therefore, becomes an increasing priority. We’ve gathered for you all the information and tips you need to know to localize your app/game in the Indonesian app market successfully.

iOS vs Android in Indonesia

Android dominates the Indonesian market with almost 90% market share (October 2022). Low to mid-range smartphones (under US$250) produced by East Asian brands such as OPPO, vivo, and Samsung have the lion’s share of the market and run on Android. On the other hand, iPhones are more expensive and harder to get because there is no App Store in Indonesia. So, iOS has to make do with the last 10% of the market share.

Android should, therefore, be your priority market if you want to localize your app in Indonesia. This analysis will focus on Google Play as well.

In terms of app preferences, Indonesians lean more toward Tools, Video Players, Social, and Entertainment apps – these categories are the ones that drive the most downloads and the highest in-app revenue. Apps that belong to these categories make up more than half of the top 10 free apps in Indonesia.

With a total of 1.47 billion downloads and a revenue of $142 million in 2021, Indonesia is one of the biggest mobile game markets worldwide. Non-local developers dominate the top 10 free and grossing games charts. Some of the most popular mobile games in Indonesia are Western and Asian games, such as Mobile Legends (Moonton, China), Garena Free Fire (Garena International, Singapore), FIFA Mobile (Electronic Arts, USA), Clash of Clans (Supercell, Finland), and Subway Surfers (SYBO Games, Denmark). Most non-local game developers do not make any localization efforts other than translating their app page metadata.

Action games, however, are by far the favorite of Indonesians. These games generate the most downloads and the highest in-app revenue, and occupy a quarter of the top 10 free and grossing charts.

On Google Play, Indonesian is the predominant language. Like English, the Indonesian language uses a Roman alphabet of 26 letters that has no particular accentuation and is pronounced the same way it is written. As a general rule, Indonesian is between 8% and 12% longer to write than English, which is something to consider when optimizing your app metadata.

It’s strongly recommended to work with a professional translator, who is a native speaker, to translate your metadata to Indonesian. They will be able to help you match the cultural and linguistic specifics of Indonesia and increase your chances of success in localizing your app.

Learn how localization works on Google Play with this simple guide.

In Indonesia, most of the foreign apps and games keep their original brand name. Only some of them make the extra step of translating their brand name into Indonesian as well, like Snake.io which becomes Ular.io, but this is far from necessary. Many apps and games, however, add generic descriptive keywords as an extension to the title. These descriptive keywords are sometimes in Indonesian and sometimes in English. Titles that include English keywords are generally well received in Indonesia.

Some English words have entered the everyday language in Indonesia, especially among young people. This should be taken into account when localizing your metadata in Indonesia. Checking the difference in keyword search volumes between the Indonesian version and the English version will let you know which keyword can give your app the highest visibility.

If you don’t provide Google with a short description, it will automatically translate the one you have in your default locale. This can be problematic as Google’s auto-translate can include errors, and it is also a missed opportunity for your app to target relevant keywords that can boost your visibility. We, therefore, recommend always providing a short description written in Indonesian.

Localizing app creatives is a common practice in Indonesia. Many foreign apps adapt the content displayed in their screenshots in order to be more relevant to the interests of the local audience. Spotify does so by displaying Indonesian-focused podcasts, music, and playlists in its UI.

As a rule of thumb, portrait orientation screenshots are preferred in Indonesia. Furthermore, screenshots often feature colorful backgrounds: neon colors with gradients in particular are popular in Indonesia, with electric blue, bright red, magenta, and bright purple being regularly used.

Discover how AppTweak can help you better understand creatives trends in any market.

Add both Indonesian and English words in screenshot captions

Indonesians understand universally used English words, so it’s not unusual to use a mix of Indonesian and English on app pages, including in the captions of the screenshots. The Asian entertainment app WeTV and the e-commerce app Tokopedia are two examples of this. The former uses English in some of its main captions and Indonesian in its subcaptions. As for Tokopedia, English words are as present in its screenshots as Indonesian words; they’re highlighted in the UI as well.

Indonesian store visitors are positively influenced by social proofing and promotions. As a result, many apps capitalize on this and include social proofs and promotions in their first few screenshot cards and feature graphics to give them the most exposure. Though this can be an effective strategy, keep in mind that this practice is normally not recommended by Google Play guidelines.

Indonesia is a very diverse country not only in terms of languages but also cultures. Many apps acknowledge this and highlight Indonesia’s cultural diversity in their screenshots, thus appealing to a larger pool of store visitors. For example, Mango Live and Hago use models of different age, religion, and ethnicity in their screenshots.

Discover the importance of optimizing and localizing your creatives to ensure your app’s success in international markets.

Islam is the predominant religion in Indonesia with Muslims representing about 87% of the population. Apps, therefore, tend to display Muslim models in their creatives so that store visitors can better relate to the app. For instance, many apps from different categories display women models wearing the hijab, a head covering worn typically by Muslim women.

Include small 3D elements in your app screenshots

To enliven screenshots and make them more appealing, one widespread practice in Indonesia is to include small 3D floating elements. These elements contribute to making screenshots more vivid and give them a sense of motion.

Check out these tips to design the best app screenshots.

Additional tips to optimize your app/game in Indonesia

Update your app icon to mark an event

Several events take place every year in Indonesia, and it is common practice among apps to change their icon to mark the occasion. They do it by either adding a banner or the date of the event to their icon to indicate their participation in the event.

During seasonal events, for example, apps adorn their icons with a Christmas hat, or hearts for Valentine’s Day, or a soccer shirt for the World Cup. Apps also celebrate their own anniversary through their icon, a common practice in Japan too. Finally, elements reminiscent of Islam are also added to the icons in the holy month of Ramadan.

Multiple shopping events occur throughout the year in Indonesia, which is an occasion for shopping apps to boost their downloads and revenue. Among the most popular shopping events are the Wine Day on 9 September, the Singles’ Day on 11 November (1 represents loneliness and there are four 1’s in 11/11), and the National Online Shopping Day on 12 December.

Popularity of multiplayer games in Indonesia

Multiplayer games are very popular in Indonesia. So much so that single player, offline games are the minority. In fact, only 2 in the top 10 free and grossing games do not include any multiplayer component. All the other games allow you to play with or against your friends or against other players. Therefore, if your game includes multiplayer elements, mentioning them in your app page is more than relevant.

Esports is booming in Indonesia

In 2020, the Indonesian government recognized esports as an official sport. Esports hasn’t stopped growing since then. Numerous tournaments and leagues are now embedded in the country’s gaming culture and, in its ninth iteration, the Mobile Legends Professional League (MPL), a competition organized around the game Mobile Legends, gathered up to 2,8 million viewers at the same time.

Some topics should be avoided in Indonesia if you want your app or game to succeed. Everything related to gambling must be handled carefully because it is negatively perceived. Also, the human body should be treated with care. Displaying even slightly unclothed models, whether female or male, can get you in trouble.

Indonesia, one of the most populous countries in the world, is growing rapidly and its people are receptive to apps and games from non-local developers. This represents an opportunity for apps and games that want to expand worldwide. To successfully localize your app or game in the Indonesian market, here are some valuable tips for you to keep in mind:

With over 100 languages supported and over 1,800 leaders worldwide using it, AppTweak is the reference ASO tool to help you localize your app, in Indonesia as well as in the rest of the world.